Hebrew: The Metric System of Languages Posted by Transparent Language on Mar 20, 2018 in Uncategorized

It was an off-hand comment from our rabbi, in response to a question I had posed to him, that triggered my investigation.

I asked the rabbi if the Hebrew word for “Western, ” – מערבי – as in the Western Wall – derives from the same root as the word “erev,” – ערב, meaning “eve” or “evening.”

His answer was “yes,” and then he added – almost as an afterthought – “You know, Hebrew is a very logical language.”

Whoa! There was the mental jolt, the germ of the idea that got me started. I thought: The Metric System was created as a logical, rational system of weights and measures. Could there be a relationship to Hebrew? What could possibly be the commonalities between Hebrew, the “logical” language, and the Metric System, derived on the basis of science and in an age of rational thought? 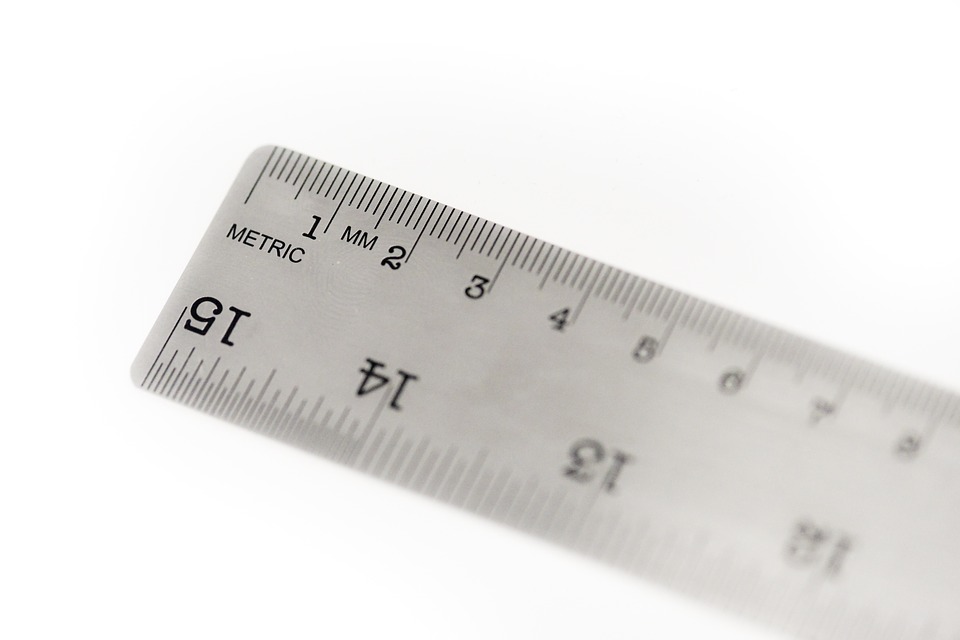 Most languages evolve, often from a base group of words and sounds that later grow and modernize by incorporating new words, either from other languages, or organically that make their way into the language through common usage, or are derived by a national linguistic academy encharged with the oversight and regulation of new words.

Mathematical standards evolved much the same way. The origin of some of our standard non-metric measurements is somewhat curious and almost comical, such as a yard being based on a the length of the King’s arm, or, according to some sources, the girth of his waist; or an inch being based on the width of a human thumb. No real rhyme or reason, just based on some arbitrary medieval standard, often attributed to royalty.

In the late 18th Century, French scientists and mathematicians created the Metric System. The modern Metric System as we know it did not “evolve.” It was revived during the Enlightenment in the revolutionary zeal of a new anti-royalist era. It was not entirely new. The initial ideas for a Metric-like system were proposed at least a century before the French Revolution. It was revived and modernized during the French Revolution.

The Metric System cast off the old medieval standards. Units of measurement that had been around for centuries were discarded and replaced with a new, modernized system. It was more revolutionary than evolutionary in nature.

Its adherents were filled with a desire to rid themselves of everything that represented the hated Bourbon monarchy and in effect start their country anew; not only politically, but scientifically, academically, and culturally as well. Thus, the advent of the Metric System was as much of a political statement as it was a move towards science and rationalism – a whole new system of thought.

Meters for length, grams for weight, liters for liquid measurement. The system made sense. Rational. Logical. Based on scientific measurements, often related to measurements of nature or derived from the Earth’s circumference. It included a series of simple prefixes to denote sub-units of the base units:

Created roughly a century apart, the advent of modern Hebrew and the creation of the Metric System bear several striking similarities.

Both were new, but revivals of previous systems that were ignored, or had gone dormant.

Both were born out of spirit of revolutionary zeal and nationalism.

Both created new systems with nicely-configured rules and standards.

Both systems created governing bodies to ensure the accuracy of the new systems, and agree to changes and additions: The International Bureau of Weights and Measures governs the Metric System; the Academy of Hebrew Language, in Jerusalem, does the same for Hebrew.

Hebrew exhibits some of the same logical features as does the Metric System. The primary logical structure of Hebrew is the three-letter root system which forms the building blocks of most Hebrew words. Understanding these many roots is not only a fascinating exercise in linguistic exploration, but is a key step in building a Hebrew vocabulary.

For example, the three-letter root samech-fay-resh (ס  פ  ר)  means “to recount,” or “telling,” as in the sense of telling a story. From this root Hebrew derives a delightful group of words:

And like the Metric System, Hebrew employs a series of prefixes that are attached to the words they modify:

The logic of Hebrew is that if you can recognize the root in Hebrew, and learn its meaning, then even when you see a word with that three-letter root that you do not know, you can figure that it must have some logical relationship to the base meaning of that root; in the above case any Hebrew word with the three-letter root samech-fay-resh  (ס  פ  ר)  will have some relationship to “recounting” or “telling.”

Into the late 19th Century, Hebrew was effectively a dead language – at least in terms of its everyday use in colloquial conversation – until it was revived by a visionary named Eliezer ben Yehuda.

Like the Frenchmen who devised the Metric System, Ben Yehuda was filled with a nationalistic spirit verging on revolutionary zeal. A Lithuanian immigrant to Palestine in 1881, ben Yehuda – on his own initiative, with no official portfolio or holding any government office – decided that if the Jews were now a “people,” and not just a religious faith, they needed their own language to go with their own land and culture.

To Eliezer ben Yehuda, Hebrew – not the more-commonly used Yiddish – was that language.

This was a monumental undertaking. Hebrew of course existed in 1881, and had for centuries, but it was considered by many a sacred language, the lashon hakodesh, to be used only when reading the Torah or other sacred texts, or for prayer in the synagogue. For many Jews, using Hebrew for something as mundane as “everyday” conversation was considered profane.

Ben Yehuda ignored these objections and relentlessly pushed forward. His zeal to have Hebrew adopted as the language of the Jewish people was the advent of what has been called “Cultural Zionism,” and Ben Yehuda’s timing could not have been better. The 1880’s witnessed the first of several large waves of Jewish immigration to Palestine, looking to escape the poverty, oppression and pogroms of Eastern Europe and Tsarist Russia. These pioneers were filled with Zionist fervor, eager to start farms, homes, schools, businesses and families. In other words, ready to build the pillars of a new country. About 25,000 immigrants arrived in Palestine between 1882-1903, – the first aliyah – the majority from Eastern Europe (primarily Romania) and Russia.

But what to do? When Ben Yehuda arrived in Palestine in 1881 there were hundreds of words – electricity, railroad, university, restaurant, just to name a few – that had no counterpart in ancient Hebrew and in effect needed to be created, just like the standards in the Metric System.

So Ben Yehuda set to work. If he could divine a meaning for the new, modern word from ancient Hebrew, such as “ kesef” ( כּסף, Hebrew for ‘silver’) and use it for a modern word, e.g., “money“ then he used that. If not, he created a new word.

Clearly, Eliezer ben Yehuda did not invent Hebrew, but he did revive it.  Some Jews in Palestine did speak a crude version of Hebrew, but Jews in the Diaspora communicated in their native languages or in Yiddish.

Although there is no record of them ever having met, it is perhaps not a coincidence that ben Yehuda’s quest to create Hebrew as the national language of the Jewish people coincided with Theodore Herzl’s campaign to create a Jewish homeland in Palestine.

Theodore Herzl – the Father of Modern Zionism – recognized that Jews did not need to create a new Jewish nation; the nation was there, but dormant, waiting to be reborn. Revived, not invented.

Eliezer ben Yehuda took a similar approach: Approaching Hebrew as an ancient language ready to be reborn in a modern, colloquial context – a language with ancient roots, but ready to be revived and adapted to modern times.

One sign that Ben Yehuda’s single-minded approach to developing Hebrew into a modern language paid off: Great Britain declared Hebrew an official language of Palestine after formally assuming the Mandate for Palestine at the San Remo Conference in 1922, the year of Ben Yehuda’s death.

The Metric System evolved and changed over the two centuries since its introduction. As technology advanced, new units of metric measurement were added: amperes, Kelvins, and moles.

Similarly, new words were added to Hebrew that could not have been envisioned in Eliezer ben Yehuda’s time, much less in ancient days. Words for automobile, electricity, airplane, computer, television, software, e-mail, Internet, on-line and hundreds of others have been created and have found their way into everyday use, ensuring that Hebrew remains a vibrant, modern language, reflecting the vibrancy of modern Israeli society. This has been especially critical in Israel – the “Start Up Nation” – with a highly entrepreneurial culture and a leader in hi-tech business start-ups.

Few Americans outside of the scientific community use the Metric System, at least in our everyday lives. Similarly, outside of religious services, only a small number of American Jews use Hebrew on a regular basis. Each takes time to learn, and can at first blush seem difficult. But Jews need not “fear” Hebrew. It can be tough to learn at first, but so is any new language, and as with learning any new language, remember the “3 P’s:” Learning Hebrew takes patience, practice and perseverance.

Today, Jews have a several effective resources available to learning the lashon hakodesh: Many available on-line (I have found YouTube to be an excellent source), and this very site, Transparent, which is an excellent resource and one of my personal favorites. In addition, there exists a network of synagogues and other Jewish organizations across the county, not only where Hebrew lessons are available, but where Hebrew is spoken every Friday night and Saturday morning, at Shabbat services and at other times throughout the year. So, if your Hebrew is rusty, or maybe you never have had any exposure to the language, then satisfy that intellectual craving and check out the resources available on-line, or at your local synagogue or JCC and get started.

As Americans, English is our primary language. But would anyone disagree that Hebrew is the language of the Jewish people, in Israel and in fact for Jews living anywhere in the world? It is one of the two official languages of the State of Israel (Arabic is the other); and it is the language of our prayer book and of course of the Torah. A special language; indeed, the lashon ha’kodesh

Are you one of the many American Jews who is mystified by Hebrew? Does Hebrew look like some indecipherable cryptogram to you?  Does spoken Hebrew sound like just a bunch of gibberish?

It’s not as scary or strange as it may seem. Okay, the letters are different and look nothing like the letters of the English alphabet. And it’s written from right to left.

But just like the Metric System, it takes time and study to get used to Hebrew. Learning Hebrew is fun, it’s “the logical language,” and learning Hebrew will help deepen your connection to your Jewish heritage. It’s an enriching experience.

Bob Canter is the 5th Grade teacher at the Block Family Religious School at Temple Israel in Tallahassee, Florida, where he also teaches beginning Hebrew courses for adults. Bob and his wife reside in Monticello, Florida.