The Different Languages in Israel Posted by Ayana on Mar 12, 2018 in Grammar

The Israeli population is a linguistically diverse community. The state of Israel absorbs immigration daily, and thus we have many languages spoken in one small country.

According to Ethnologue there are 37 languages in Israel. For comparison, there are only 24 in Germany, 15 in Spain, 12 in Switzerland.

The Hebrew language consists of patterns. Every word is a root formed into familiar pattern. The patterns are divided to two: those that shape the roots into verbs (called בנינים) and those that shape the roots into nouns (called משקלים). They attach prefix and/or suffix to the root, and add meaning to it. The pattern for languages in Hebrew, for example, always attach the suffix ית to the root. While languages names in English are diverse in shape, in Hebrew almost all of them end the same: עִבְרִית (Hebrew), שְׁוֶדִית (Swedish), צָרְפָתִית (French), בּוּלְגָּרִית (Bulgarian), עֲרָבִית (Arabic), יָפָּנִית (Japanese), and so on. (There are very few exceptions, as you’ll see at the end of the post).

“All Ordinances, official notices and official forms of the Government and all official notices of local authorities and municipalities in areas to be prescribed by order of the High Commissioner, shall be published in English, Arabic and Hebrew.”

Most laws of the British Mandate were adopted in the State of Israel, including this one. But many of them were subject to amendments by the Israeli government. The amendment of this law was published in 19 May 1948 and states that:

“Any provision in the law requiring the use of the English language is repealed. ”

And yet, most of the signs, notices, and publications in Israel are still published in English as well. For most of the Israelis, English is their second language. Their first mandatory English class is in elementary school. I started in fourth grade, but nowadays most schools begin teaching English in second grade. In order to matriculate to an Israeli university or college, one must pass a high school English exam. In order to graduate from an Israeli university or college, one must pass the English test of The Israeli National Institute for Testing and Evaluation, or enroll English class in his academic institution. 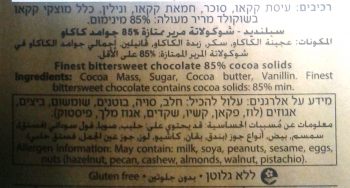 My second language is English.

After the Israeli government cancelled the British requirement to use English in official documents, only two official languages were left: Hebrew and Arabic. Arabic is an official language that is widely spoken in Israel. The Israeli population is estimated to be 8.6 million people (as of April 2017). 20% of them are Arabic (around 1.8 million people), the largest minority in Israel.

The Israeli curriculum requires schools to teach a third language. English studies, as mentioned above, are mandatory in elementary school, high school and university. Another language – Arabic or French – is mandatory only for three years during junior high school. Every institution has the right to choose the third language it wants to teach, between French and Arabic. My school, for example, chose Arabic, and so I learned Classis Arabic beginning at seventh grade. Unfortunately, I don’t remember much. 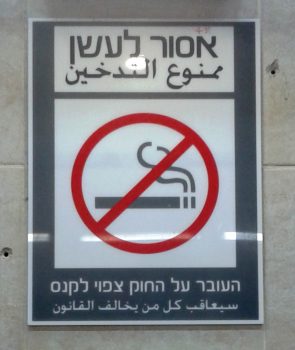 Arabic is an official language in The State of Israel.

Hebrew ceased to be an everyday spoken language around second century CE. Aramaic became the Jewish secular language for daily use, while Hebrew became a holy language, and had been limited to prayers, religious studies, rabbinic literature and poetry. Hebrew was revived as a spoken language in the 19th century by the Zionist Movement. Nowadays, Hebrew is the primary language in the State of Israel, and the main language used for communication. Almost the entire population speaks it, either as native speakers or as a second language.

My mother tongue is Hebrew.

After the post-soviet Russian government opened the borders of the former Soviet Union, many Jews emigrated. Almost one million of them came to Israel between 1989-2006. The Russian immigrants successfully integrated into the Israeli society, while preserving their culture and language. Nowadays, Russian is the fourth spoken language in Israel, and appears frequently in public publications next to Hebrew, Arabic and English, even without being an official language. 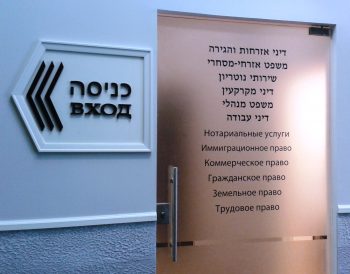 Russian & Hebrew on a lawyer office door (photo by Ayana) 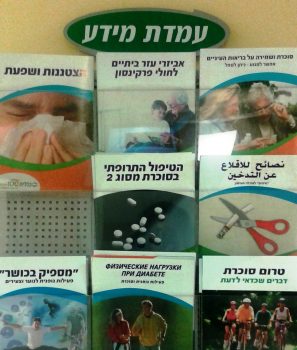 The immigration of Jewish Ethiopians to Israel began during the mid 1970s. So far, almost 100,000 Jews have left Ethiopia and come to Israel, bringing their culture and language with them. Since they are a smaller minority by size, Amharic doesn’t receive the same impact as Russian does. However, you can still notice Amharic on public signs, notifications and handouts. 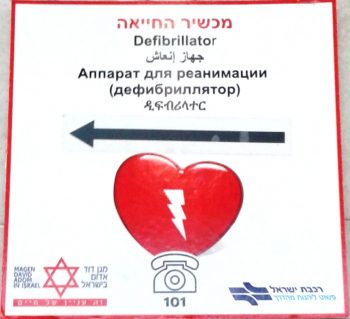 Five languages on one public sign (photo by Ayana)

Amharic is the language of Ethiopian immigrants.

The Israeli population is diverse and interesting. As we’ve mentioned above, there are many more than four spoken languages in Israel. Among them are Romanian (רוֹמָנִית), Yiddish (יִידִישׁ), Ladino (לָדִינוֹ), Polish (פּוֹלָנִית), different Arabic dialects, etc. Each person has his own tongue, history and knowledge, and together we create a warm heterogeneous community.