Lag BaOmer celebration Ended in Tragedy Posted by Ayana on May 5, 2021 in Holidays and Observances, News 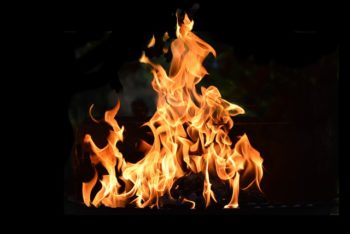 Photo by Scred from Pixabay, CCO

Rabbi Shimon bar Yochai (רַבִּי שִׁמְעוֹן בַּר יוֹחַאי), who lived in the second century, was a brilliant Talmudic scholar. He was an active Mishnaic sage who is attributed with the authorship of the Zohar, the main work of Kabbalah. According to tradition, Rabbi Shimon died on Lag BaOmer (ל”ג בָּעֹמֶר). On the day of his death, he revealed the secrets of the Kabbalah to his disciples, and asked them to observe this day as a holiday.

This is one of the reasons why Lag BaOmer became a day of celebration throughout the Jewish world. Every year on Lag BaOmer, Jews around the world remember the great sage, lighting up bonfires symbolizing the light and wisdom he shared with the world. The main celebration is in Israel at Mount Meron (הַר מֵירוֹן), the burial place of Rabbi Shimon, to where thousands of pious Jews make an annual pilgrimage (עֲלִיָּה לָרֶגֶל). They light bonfires, they sing, they dance, they pray. Watch the full broadcast of the event from 2019:

The festival which is called הִלּוּלַת רַבִּי שִׁמְעוֹן בַּר יוֹחַאי (Hillula of Rabbi Shimon bar Yochai), attracts many pilgrims every year. More than half a million people visit the mount at Lag BaOmer. But although this is the largest public gathering in Israel, there is no manager to the festival. רַק אָסוֹן יַכְרִיחַ אוֹתָם לְמַנּוֹת בּוֹס אֶחָד רִשְׁמִי לַהִלּוּלָה הַזֹּאת (only a disaster will force them to appoint one official boss for this revelry), said the reporter in an article published in 2018:

Unfortunately, a disaster did occur this year. On April 29, tens of thousands of Orthodox Jews attended the largest event held in Israel since the coronavirus pandemic began. After last year’s cancellation, even the hot humid weather didn’t spoil the joy of the all-night festival. Impressive bonfires (מְדוּרוֺת) were lit, one after the other, loud messianic stanzas were played on the speakers, people kept dancing for hours, many prayed.

When suddenly, several minutes after one a.m., the music stopped. Rabbis and officers used the microphones addressing the crowd (קָהָל) in Hebrew and Yiddish, warning about the density, asking for collaboration. But it was too late. In the radio network of the rescue teams they were already talking about a multiple casualty incident (אֵרוּעַ רַב נִפְגָּעׅים).

A narrow (צַר) corridor and a great crowding led to an inevitable crush. Around one a.m., celebrants began to pour out of a section where festivities were being held, through a long narrow passageway (מַעֲבָר). Just before the exit, the metal floored slope twists to the right and turns into stone steps. Someone, apparently, slipped off the steps and caused a human avalanche. The deadly incident was all caught in footage and published on Twitter.

In seconds the annual celebration turned into a tragedy. 45 people were killed and at least 150 injured in what became Israel worst civilian disaster. Sunday, May second, was declared a day of national mourning (יוֹם אֵבֶל לְאֻמִּי).