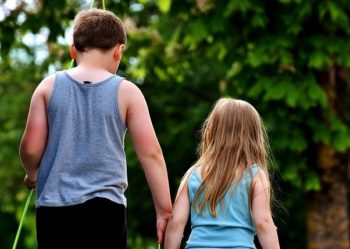 Photo by Alexas_Fotos from Pixabay, CCO

The Hebrew word for brother, either younger or older, is אָח, pronounced as ach.

The Hebrew word for sister, either younger or older, is אָחוֹת, pronounced as a-chot.

I have one brother.

I have a sister who is five years older than me.

This is David’s brother.

My sister came to visit me.

Usually, when talking about my sister or my brother, Israelis use a possessive suffix instead of the possessive word my (שֶׁלִּי). Every Hebrew noun can be declined with a possessive suffix; הַמִּשְׁפָּחָה שֶׁלִּי (my family), for example, has the same meaning of מׅשְׁפַּחְתּׅי.

הַבַּיִת שֶׁלִּי (my home), for another example, has the same meaning of בֵּיתִי. The only difference is the usage of the possessive phrase. Although every Hebrew noun can be declined with a possessive suffix, in spoken Hebrew, though, you rarely hear someone use these suffixes. When talking about one’s objects, the possessive word שֶׁלִּי (my), is usually used. Mentioning one’s own siblings, on the other hand, is different. The usage of a possessive suffix with the words brother and sister is fairly prevalent. אָחִי (my brother) and אֲחוֹתִי (my sister) are very common in daily spoken Hebrew.

This is my sister.

My brother is twenty years old.

My sister is celebrating her birthday today.

My little brother told me.

My sister came to visit me.

My brother has two children.

These two words are also very common in Hebrew slang, for addressing males or females. There are many ways to address someone: by his name, by his surname, by his nickname, or by a formal title. To express affection when addressing someone close to you, many Israeli youngsters choose the Hebrew nouns for brother and sister combined with a possessive suffix. It can be translated as bro, or sis, and can refer to anyone close to the speaker: a friend, a relative, a colleague, a neighbor. These informal methods of addressing can even refer to a stranger, at the same age of the speaker or younger, when the speaker wishes to express a closeness, or an empathy.

Thanks for the help, bro.

Dude, you do not understand what happened.

Sis, you are overreacting.

Both nouns decline to plural in accordance to their grammatical gender without exception:

I have two brothers: younger brother and older brother.

My sisters are taller than me.

In Hebrew, the masculine plural form of any noun refers to two kind of groups. It can refer to a group that consists of masculine singles only. For example: the boys (הַבָּנׅים). It can also refer to a mixed group of males and females. For example: the children (הַיְּלָדׅים), boys and girls. A feminine plural form, on the other hand, refers to a group consisting of females only. אֲחָיוֹת (sisters), hence, refers to sisters only, while אַחׅים (brothers) can refer to brothers only, or sisters and brothers together. Therefore, the plural form אַחׅים (brothers) refers to all the speaker’s brothers and sisters, but if he still wishes to clearly mention both he can say: אַחׅים וַאֲחָיוֹת (brothers and sisters).

Review the chart below that summarizes all the new vocabulary: