Hebrew Plural Nouns Posted by Ayana on Sep 21, 2020 in Grammar 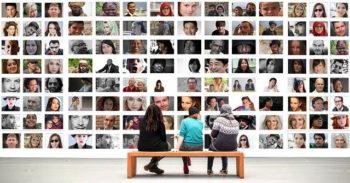 Hebrew nouns can be either singular or plural in number. They are made plural by adding a one-syllable suffix to the end of the singular noun. There are two different plural suffixes, one for each grammatical gender.

More vocabulary of both gender, for example:

Now let’s practice: in the next list composed of plural nouns, all are fruits. Can you figure out which fruit is masculine and which fruit is feminine? 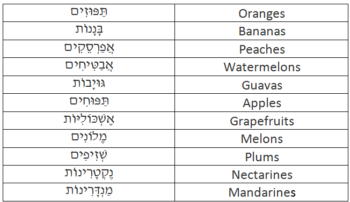 But, every rule has its exceptions (לְכָל כְּלָל יֵשׁ יוֹצֵא מִן הַכְּלָל). Some nouns get the opposite gender’s ending in the plural form. The fruit תְּאֵנָה (fig), for example, is feminine. Its plural, though, ends with the masculine plural suffix – תְּאֵנׅים. The word fruit itself (פְּרִי) is masculine, but its plural ends with the feminine plural suffix – פֵּרוֹת. Unfortunately, there’s no rule to help you figure out which are the exceptions to the rule. You will have to memorize them. Several of them appear, for example, in alphabetical order in the chart below. In future posts, I will add plural forms in the vocabulary list, as well. 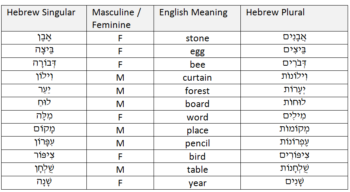 Learning a language is not easy, but always remember – practice makes perfect. Try your best to practice Hebrew every day. Don’t end the day without reading a short paragraph, singing a song, or writing down several sentences. A fluent Hebrew speaker was once a beginner who didn’t give up. So, as I like to say –