Hebrew Nouns` Gender: How to Distinguish Feminine from Masculine Posted by Ayana on Jan 31, 2016 in Grammar 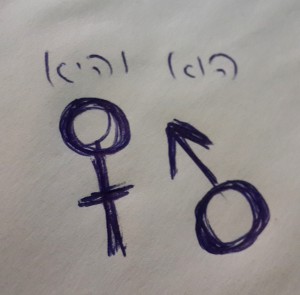 Notice: not every noun that ends with ה is necessarily a feminine. For example: dustpan (=יָעֶה) is masculine, its ה is not the feminine ה but a part of its root.

Notice: not every noun that ends with ת is necessarily a feminine. For example: junction (=צֹמֶת) is a masculine, its ת is not the feminine ת, but a part of its root.

There’s a saying in Hebrew that says: לְכָל כְּלָל יֵשׁ יוֹצֵא מִן הַכְּלָל. This means that every rule has its exceptions. So one can’t always rely on that main principle of ה and ת endings of the feminine nouns. There are quite a few nouns in Hebrew that end with other letters that are feminine as well. Unfortunately there is no way to distinguish them without memorize them.

Most of these words have some history beyond them. כּוֹס, for example, is referred to in the bible as feminine, but in the Talmud as masculine. Nowadays it has fixed firmly as feminine by the language speakers. The word face (=פָּנִים) has similar history, though vice versa. The bible refers to it as masculine, but the Talmud as feminine. Today Hebrew speakers use freely both feminine and masculine gender when speaking about faces.

רוּחַ and שֶׁמֶשׁ both appeared in the bible as words without specific gender. Sometimes the bible refers to them as masculine and sometimes as feminine. Nowadays the spoken language firmly refers to them as feminine. If you visit Israel and try to describe the sun with masculine adjectives, people will insistently correct your alleged mistake. But as long as the bible can, so can you. And a lot of writers utilize this fact. Hence we can find songs with a feminine sun. Like the song אוֹר with the line:

In the song לִי וְלָךְ, though, the sun is masculine:

It’s very liberating to think of an object as sexless, don’t you think? 🙂