A visit at the Carmel Market Posted by Ayana on Feb 18, 2016 in Uncategorized

Last Friday, when the temperature went up, my friend and I went out to catch some winter sun. We went for lunch and shopping (קְנׅיּוֹת) at The Carmel Market (Shuk HaCarmel שׁוּק הַכַּרְמֶל). The שׁוּק is a popular site in Tel-Aviv, an attraction for locals and tourists alike. Making our way through the horde, we enjoyed the atmosphere as much as the merchandise. Sellers singing; Israelis buying flowers and seasonings for their Friday night dinner; foreigners tasting Halva, buying souvenirs and experiencing the Middle East market culture.

The שׁוּק is almost a century old – its history begins at 1920ʼs – and embodies snippets from the history of Israel. During Israel’s austerity period of the 1950s, the שׁוּק rose to great prominence as the best and most direct source of local, fresh produce. The market has also suffered violence. During The Independence War, Arab snipers shot at Jews shopping in the שׁוּק from the nearby Mosque. Terrorist attacks struck the שׁוּק as well, but the stalls (דּוּכָנׅים) are still standing, and the שׁוּק is still vigorously active. 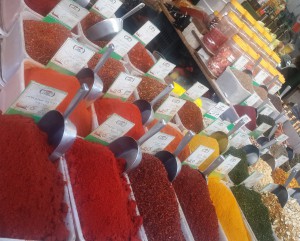 Nowadays the שׁוּק is all about the mixture. Roaming through the דּוּכָנׅים , not only the mixture of smells and colors encompass you, but the mixture of languages as well: Hebrew, English, Russian, French, Japanese just to name a few. And let’s not forget the core of the שׁוּק: the mixture of goods. Vegetables, fruits, cheese, sweets, pastries, clothes, cosmetics, jewelries and trinkets. 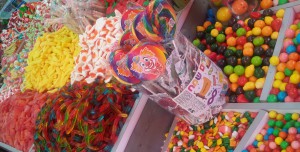 I bought seaweed from the Asian store, my friend bought funny T-shirt as a gift, and after the קְנׅיּוֹת we were ready to fill our stomachs. Numerous coffee houses and restaurants surround the שׁוּק. We chose to eat at Ha`Mitbahon. Blue checkered table cloths fill the restaurant, lots of flowerpots decorate the space and delectable music plays. The food is worthy as well: I had an avocado salad while my friend enjoyed a Shakshouka. Simple and tasty. 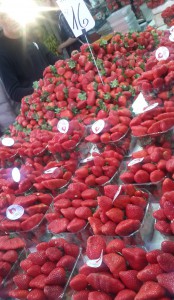 The שׁוּק is outdoors and open Sunday-Friday. It usually congested and noisy. Come hungry 🙂