A Music Festival in a Palace Posted by Nicole Herbert Dean on Dec 28, 2021 in Culture, Holidays, Music 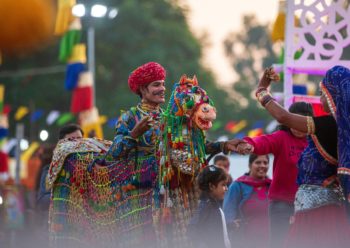 Photo by Nishant Aneja from Pexels

The whole world celebrates winter in some form or the other. For Christians, December means Christmas – even in India. The fact that 85% of the country is non-Christian does not matter. Everyone takes part in the festivities. People buy Christmas trees and wreaths, sweets and stockings. But did you know that there are a couple of other festivals त्यौहार in India at this time of the year? We will be taking a look at a high tech music festival उत्सव that draws international creatives.

It is a boutique music festival that occurs over 3 days in India during December. It takes place in in the Shekawati region of Rajasthan. This region is located on the ancient silk route रेशम मार्ग.

Abhimanyu Alsisar from the Royal family of Alsisar started this festival in 2013 at the Alsisar Mahal.

This festival combines जोड़ती all that Rajasthan has to offer with international creative अंतरराष्ट्रीय रचनात्मक  talent.  Musicians from all over the world, especially those who specialize विशेषज्ञ बनना in underground music converge on the Mahal to enjoy 3 days of creativity, music, dance, yoga and wellness. The palace also organizes a treasure hunt खजाने की खोज within its walls.

The festival is conducted on the grounds and inside the famed Alsisar Mahal that is situated in Shekhawati, Rajasthan. The village is a medieval village मध्यकालीन गांव with beautiful Havelis. Alsisar Mahal is originally a historic fort ऐतिहासिक किला that was built in the 17th century. It features many buildings adorned richly with frescoes, courtyards, and abundant प्रचुर desert rich with its flora and fauna.

History of the Alsisar Mahal

Alsisar Thakur Samrath Singhji who was the great-grandson महान पोता of Raja Shardul Singh of Jhunjunu, captured पकड़े the fort in 1757. During the British Raj, the British bombarded the fort in their attempt to curb the power of the mighty Shekawats. The Shekawats were known to be fearless warriors निडर योद्धा.

The mahal was rebuilt in 1954. It was remodeled and renovated from 2000 to 2006 when it opened its doors to the public as a heritage site.

How to get there

There are many ways to get to the Alsisar Mahal from the capital, New Delhi – train, bus, taxi, night train, or private car. Prices range from $7- $65 dollars for transport. The journey itself is around 4-5 hours long.

The mahal has been upgraded and outfitted with top modern amenities. Choose one of the princely suites or Royal Rajputana rooms to enjoy a luxurious आलीशान stay.  Besides 24/7 service, there is air conditioning, wifi, car services and experiences, restaurants with international and Indian cuisines.

Things to Do at the Festival

Desert Camping: Sleep in a luxurious tent under the stars about 100 meters away from the palace. The tent allows you to enjoy nomadic life खानाबदोश जीवन without forsaking luxury amenities which include beds, linens and even charging stations for your phone.

The foodie can enjoy rooftop dining at the palace or hang out at the little roadside stalls ढाबा in the village that serve everything from parathas to pizza.

There are a number of activities such as kite flying पतंग उड़ाना, folk dance, local music performance, Yoga classes, reiki sessions, sundown sessions which serve amazing cocktails and food. There is even a treasure hunt in the palace.

Local craftsmen sell their wares for the shopaholic. Spend the day bargaining and picking up rich Rajasthani crafts, jewelry, and clothes.