How Does Ladakh Celebrate New Year? Posted by Nicole Herbert Dean on Dec 29, 2021 in Culture, Holidays 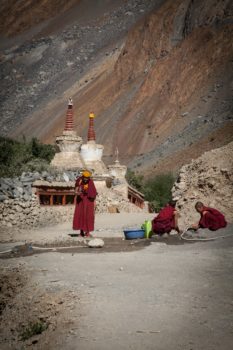 Ladakh sits में स्थित in the northern part of India above Jammu and Kashmir. 3 countries administer प्रशासित Ladakh: India, Pakistan and China. The Indian part of Ladakh is toward the southeast. Kargil is the gateway to Ladakh for India and has the Line of Control between Pakistan and India. It is one of the highest regions उच्चतम क्षेत्र of the world to be inhabited by people. The land is rugged, mountainous and arid like a desert. However, there are some beautiful species of birds that live there as well as the famous double-humped camel.

The people of Ladakh have different features विभिन्न विशेषताएं from the rest of India. Their origins lie in Tibet and their features are similar to  Central Asian and Tibetan people. These communities live as nomads, sheep rearing and depending on simple agriculture. They trade fruit and wool. Ladakh is essentially majority Buddhist with a Muslim minority.

There are many monasteries in Ladakh and the monks साधु organize colorful festivals during the year. Tourists from all over, especially Europe converge on these monasteries to enjoy the rich culture that Ladakhi offers.

The Losar Festival takes place around the same time as the world celebrates New Year. Losar is the way the Buddhistबौद्ध  culture ushers in the new year. Unlike western culture which features new year’s eve parties for just a night,  the Losar Festival focuses on positivity सकारात्मकता, wellness कल्याण, and celebrations for 15 days. However, the main celebrations are held in the first three days of the festival.

Firstly, the Young as well as old celebrate. Everyone parties. At the start of the 15 days, there is a Metho ceremony in which people twirl long ropes with flaming cloths and chant. They dance in a circle while throwing these flaming torches जलती हुई मशाल into a stack of wood to burn. When the stack of wood is lit, they dance around it to the accompaniment of drums.

If you visit a monastery, you can see people offering prayers accompanied by chanting and religious offerings. Tourists visit to partake in the festive yet strangely serene atmosphere high in the mountains.

While visiting it is worthwhile सार्थक to engage in different activities typical to locals. People gather to watch the many processions with masked dancers in colorful clothing.

As far as food and beverage items, be adventurous and try out the local brew, Chhang which is made entirely in an eco-friendly and sustainable manner. Watch the video here on how they make it.

Ladakhi follow the Tibetan calendar and with it their cultural traditions. Many families eat Guthuk or thukpa which is a hand-rolled noodle soup that is auspicious to eat on New Year’s Eve. The significance of the ritual is to purify the body and the home from the existing impurities दोष and negative energies नकारात्मक ऊर्जा of the previous year. The day leading to the new year is spent cleaning every part of the home, and bathing. This too signifies purifying the house and body. At the end of the day, the ritual धार्मिक संस्कार culminates with Guthuk.

So, if you intend to celebrate New Year’s off-grid and in a new way, head on out to Ladakh, India.