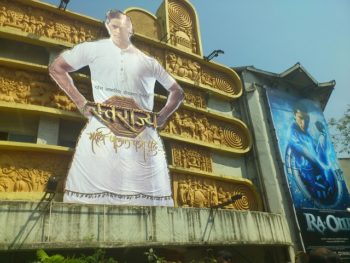 Image by Theresa Schenk from Pixabay

Back in the eighties if you were to walk down the street उस रास्ते पर चलो in Mumbai, you would hear disco music wafting out of the windows. Now, mind you, India’s windows are always open except in inclement weather खराब मौसम.  This was a time that John Travolta and the Bee Gees were still creating waves in the US. And most of Bollywood’s music was romantic melodies without the pep of disco. Not to be outdone, Bappi Lahiri, India’s first rockstar पहला रॉकस्टार created India’s famous disco beat song  I am a Disco Dancer.

Bappi Lahiri brought disco music and other lively songs into Bollywood, transforming पहला रॉकस्टार and propelling the music into urban and rural Indian homes.  He created music for the youth of India. People say that he was not just a disco king but he was also a melody राग maker and melody king as well.

Bappi Lahiri was born Alokesh Lahiri on the 27th of November 1952, in Sirajganj, Bangladesh. He was born to a Bengali Hindu Brahmin family of musicians संगीतकारों. Both mom and dad were musicians. His uncle was the famous Indian playback singer, Kishore Kumar.

Bappi started to play the table, and Indian drum at the age of 3.

Bappi married Chitra in 1977 – a marriage that lasted till the day he died, February 15, 2022. His son and daughter carry the family tradition परंपरा of music. Rema is a singer and Bappa, the son is a music director.

Bappi Da’s style was as distinctive on the Bollywood scene as his music. He loved heavy gold jewelry and was often seen with multiple gold chains adorning his outfits.

Bappi composed music for Bengali and Hindi movies. His first hit was in 1975 when he composed the music for the film Zakhmee. One of his recent films was ‘Ooh la la tu meri fantasy’ in the ‘The Dirty Picture’ and ‘Tamma Tamma‘ in  ‘Badrinath ke Dulhaniya’.

Bappi is also dubbed for Elton John in the Hindi version of the Hollywood movie, Kingsman 2 – The Golden Circle. In his words, it was an honor सम्मान to do so since he felt a kinship समानता with Elton John as far as style went.

He has composed more than 5000 songs in different languages – Hindi, Kannada, Telegu, Bengali, and Oriya. He also did the voice-over for the Hindi animated version of the film Moana. Many of his songs turned out to be chartbusters – becoming popular because of their upbeat peppy melodies and romantic lyrics.

In a month when people are still reeling from the loss of India’s Nightingale, Lata Mangeshkar to the COVID 19 pandemic, the film industry is feeling the void left by yet another icon of the industry. Social media is filled with videos of people from all over Bollywood arrive to pay their respects to this man at his home in Mumbai.