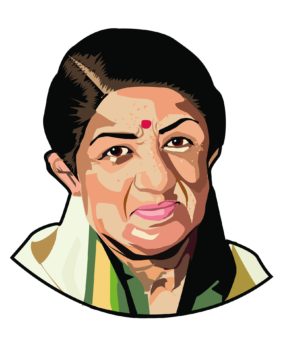 A quick search खोज with the words, Lata Mangeshkar displays results mostly of her musicसंगीत. But her fan base is so huge and dedicated that there are even journals called, “Don’t Disturb Me When I am Listening to Lata Mangeshkar”.

Lata sang a raaga from Hindol for a room full of teachers शिक्षकों की when she was four or five years old, providing the educators a glimpse of her future.

She learned Hindi in homeschool and spoke her native language देशी भाषा of Marathi. Education in a school was not possible as her dad traveled with his theatre group रंगमंच समूह constantly. She recently told Scroll, a  newsmagazine that she is mostly self-taught. She speaks, Hindi, Marathi, Urdu, a little Punjabi, and also learned Sanskrit and Tamil.

She has sung in 36 languages including, Dutch, Russian, Fijian, and Swahili.

Her parents died early and she was forced to become a breadwinner कमानेवाला. She lived with relatives all her life and never married. But in her own words, she never felt lonely as she was surrounded घिरे by her extended family and was well protected.

Lata rose to fame and became Bollywood’s Nightingale. She was the voice to many reels. She stirred up patriotism देश प्रेम by singing Ae Mere Vatan Ke Log after India’s defeat हार at the hands of China in 1962. Her music was also the soundtrack गीत संगीत to many iconic Hindi films, Bazar, Veer Zara, and Maine Pyar Kiya.

Her first break came when Ghulam Haider signed her to sing in Bollywood. The music producers recognized the freshness in her voice as well as the classical Hindustani training. She sang memorable अविस्मरणीय songs in the films Pakeezah, Mughal E Azam, and Dastak.

Her brother, Hridayanath Mangeshkar composed devotional धार्मिक music, Dyaneshwari for her to sing as well – music which showed off her vocal range.

Her best work was showcased with Madan Mohan in songs like Lag Ja Gale and Jara Si Aahat and Mai Ri from the movie Dastak.

Keeping up with the Times

Things started to change in the Eighties in Bollywood and many young playback singers entered the scene with modern vocal styles. Still, even as she aged, the quality of her voice remained impeccable. Music directors like A.R.Rahman chose her from amongst many young, fresh and trendy playback पार्श्व गायक singers. She sang, O Paalanhaare in the 2001 film, Lagaan.

She was a familiar voice to many older generations पीढ़ी and so to insert her in a modern movie proved successful.

Lata has left behind a massive legacy विरासत and a nation in mourning. There is an outpouring of genuine grief for this beautiful singer. Her music will last for generations to come. Why? Because it was the soundtrack to many of India’s son’s and daughters’ lives.