Coke Studio India Posted by Rachael on Apr 20, 2018 in Uncategorized

I was first introduced to the addictive phenomenon that is Coke Studio, a show that debuted on MTV in 2011, by my Pashto lecturer in college. From day one, I was hooked to Coke Studio’s infectious rhythms, beautiful lyrics and inventive blend of musical genres you would be hard-pressed to find anywhere else. In addition to watching films and reading educational and literary materials in Hindi, another easy and fun way to learn the language is by listening to music. If you haven’t already become enamored of Hindi music through Bollywood and/or Indian bands, Coke Studio is the perfect show to explore Hindi music, as well as music in India’s vast array of regional languages, as it will introduce you to a wide range of artists and musical genres that you might not encounter otherwise. In this blog, I’ll be celebrating my enduring love for Coke Studio with a discussion of five of my favorite songs. 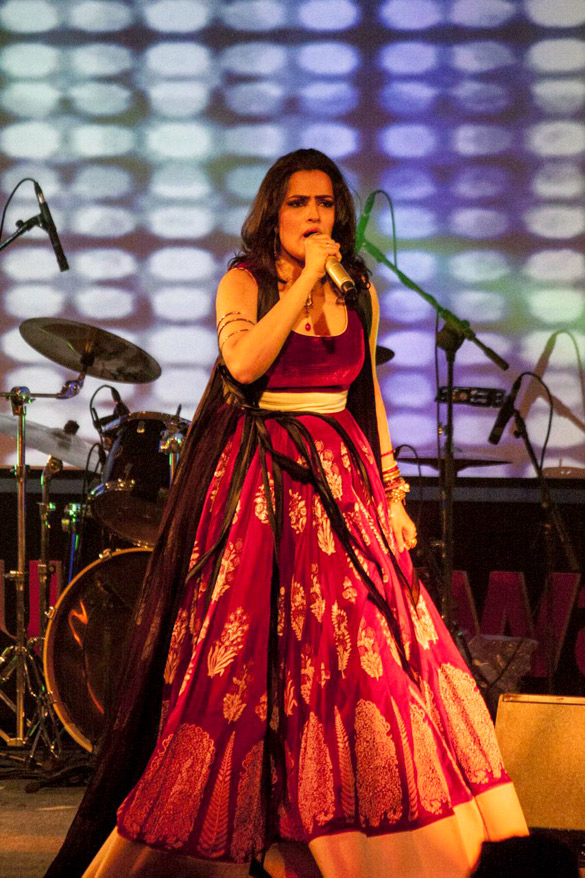 Image by Bollywood Hungama on Wikimedia Commons; licensed under CC BY 3.0.

(I’ve just come from exchanging glances with my beloved)

(Let the girls at home say what they will)

(It has pervaded the depths of my heart)

Even apart from Coke Studio, Sona Mohapatra is one of my favorite Indian artists. Her slightly deeper voice, which stands in stark contrast to the soprano voices of the immensely popular Shreya Ghoshal and the legendary Lata Mangeshkar and her sister Asha Bhosle, gives her songs a uniqueness that matches her unforgettable and bold personality. She is also one of the few mainstream (as in, popular throughout India) vocal artists from the state of Orissa. She even sang a song in her native Oriya for Coke Studio called “Rangabati,” which I encourage you to check out as well.

In addition to her work for Coke Studio and Hindi film soundtracks, she was featured with her husband, music producer Ram Sampath, on Aamir Khan’s social issue-based talk show Satyamev Jayate multiple times as one of Khan’s favorite artists and the perfect embodiment of his bold and fearless attitude toward social justice issues.

In one of my favorite songs of hers on Coke Studio, Mohapatra sings a poem by Amir Khusrow entitled “Piya Se Naina.” Amir Khusrow (1253-1325), a legendary Sufi poet, musician and scholar from modern-day Uttar Pradesh, wrote most of his compositions in Persian and Hindavi, which is an early variant of the Modern Standard Hindi we know today. Listen closely to the song as you will be able to pick out many words that are similar to or the same as those in Modern Standard Hindi, and you may even understand a majority of the song’s meaning! Here’s a hint before you listen: the full title of the track, “Piya Se Naina Lara Aayi Re” means “I’ve just come from exchanging glances with my lover” or, more literally, “Our gazes went to battle.” As a hallmark of Coke Studio’s dedication to creating unique musical fusions, this song consists of Hindustani, folk and Afro beat music and, surprisingly, employs no electronic instruments.

Image by Joshua Singh on Wikimedia Commons; licensed under CC BY 2.0. A qawwali performance at Salim Chishti Dargah at Fatehpur Sikri (Salim Chishti was a Sufi saint and the Mughal Emperor Akbar was his most famous disciple).

From uttering “there is no God but Allah”

From uttering “(in) the name of Allah”

“Bismillah” (“In the Name of Allah”) is a truly mesmerizing and beguiling song. This live performance was originally aired to celebrate the Islamic festival of Eid. Featuring the vocals of Salim – Sulaiman, the wildly popular Kailash Kher and Munawar Masoom, this song is a traditional qawwali-style composition with, of course, a modern twist. For those not familiar with the genre, qawwali music, which hails from the mystical tradition of Islam known as Sufism, generally contains devotional content on Allah’s glory and mercy. It is a musical tradition with a long history, stretching back 700 years and was originally performed at Sufi shrines or dargahs (the tombs of Sufi saints). However, the late 20th century saw its rise in mainstream and international popularity. It is truly soothing and beautiful music, so give it a listen if you’d like to discover something new! In fact, in addition to his many other titles and achievements, the aforementioned Amir Khusrow is also known as the “father of qawwali.” 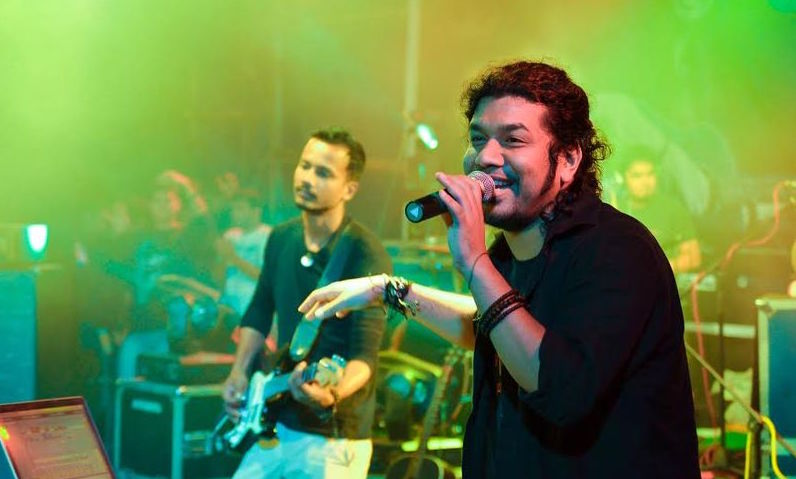 On these creases are inscribed

A thousand tossings and turnings

I melt into the slow-burning flame

(these lines are switched)

“Khumaar” (“Intoxication”), another of my favorite Coke Studio songs, is sung by Papon. With this song especially, Papon shows that he is a force to be reckoned with both on stage and behind the scenes on Coke Studio and in the music industry in general. Papon brings all of his multifarious talents to fruition in this seemingly mellow but explosive and powerful song about intoxicating love. His vocals need to be heard to be believed and, if you listen closely, you can follow the narrative of the lyrics, which are beautiful in their own right. Be sure to also pay attention to the many talented individuals arrayed behind Papon who fill out the song’s electrifying instrumental sound. 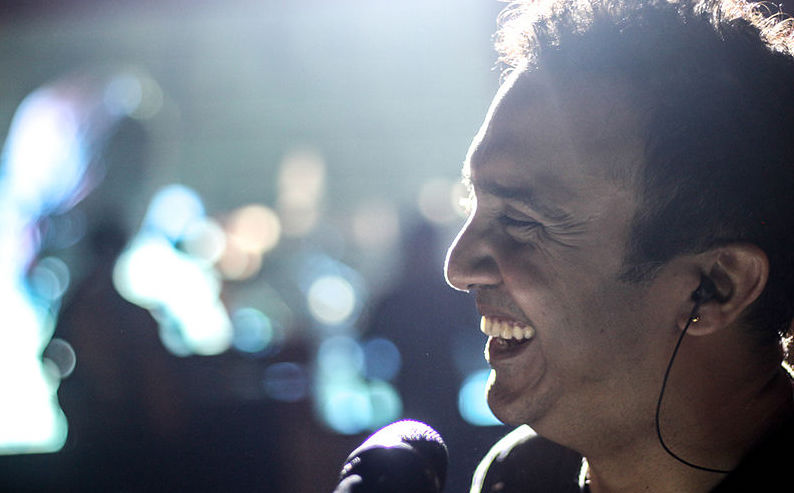 Image by Ashveta Budhrani on Wikimedia Commons; licensed under CC BY-SA 4.0. Ram Sampath on the set of Coke Studio.

Good heavens, no matter how much I repent

My heart trips up yet again

Sometimes I reason with it, sometimes I distract it–but still it rebounds

This scoundrel will leave me hanging one day

“Tauba” (“Good Heavens” or “Heaven Forbid”) – sung by the popular Bollywood singer Benny Dayal and his talented backup singers (Papon serves as a back-up singer in this song as well), this is a fun and energetic number that combines numerous musical styles like African rhythms and funk. As I’ve said before, you can only see such a formidable array of talent and such a unique blend of musical genres on Coke Studio, so check it out! 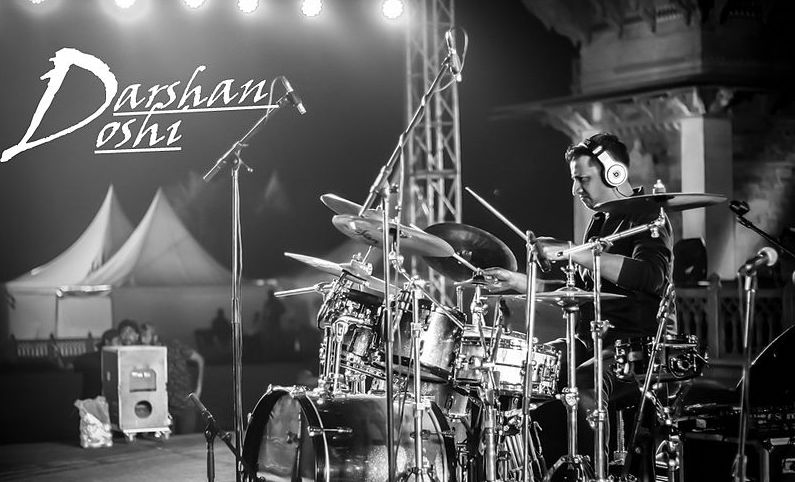 Nameless desires, as yet unexpressed

Why should there be limits on a dream, yet it hasn’t taken flight

I know, yet I can’t convince my heart, that you aren’t meant for me

Helplessly, I call out: come to me, my beloved

“Benaam Khwaahishen” (“Nameless Desires”), sung by the skillful Anweshaa, shows off Papon’s talents once again but, this time, in a different form. In addition to being a music producer and singer, Papon also writes the lyrics for this song. Like “Khumaar,” the song begins as a subtle meditation on love and its triumphs and torments but builds steadily to a crescendo near the end of the song, during which Papon employs the shehnai to add a haunting element and richer musical texture.