Many languages have a system of gender, which is basically just an organizational tool for separating words into masculine, feminine and sometimes, neuter, categories. In essence, it is an attempt to further “anthropomorphize” language, which is already such an intimate human creation. If you have studied a Romance language before, for example, you’ll know that most Romance languages possess a system of gender (usually including just masculine and feminine categories). So, if you’re coming to Hindi with this knowledge, it won’t phase you overmuch that Hindi also has a system of masculine and feminine genders. The small catch is, though, that this gender system in Hindi is a bit more complicated due to the sheer plethora of languages of which Hindi is composed and the fact that each of these languages has its own distinct rules governing gender. So, here’s a quick explanation of Hindi genders based on each word’s source language.

Although all of the source languages represented in Parts 1 and 2 of this blog series do not encompass the entirety of the languages of which Hindi is composed, they are the major ones. 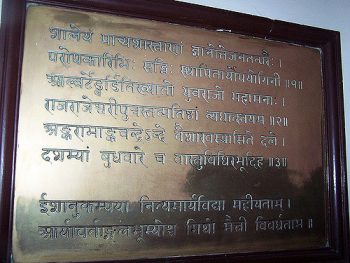 Image by Romana Klee on Flickr; A plaque in Sanskrit on a school building

Beginning Hindi students are often taught that one can identify feminine nouns because their singular forms usually end in ई/ee, इ/i or इया/iyaa while their plural forms end in इयाँ (iyaan, nasalized); similarly, one can identify masculine nouns because they usually end in आ/aa (singular) and ए/e (plural). These rules are true for many words, but not all. That’s why it helps to know the source language of a lot of words because knowing the source language often tells one to what gender rules that word is subject.

Words from Sanskrit that end in -aa (आ) are often feminine, such as भाषा/bhaashaa (language), प्रेरणा/prernaa (inspiration), आशा/aashaa (hope), यात्रा/yaatraa (journey, trip) and परीक्षा/pareekshaa (test). But, there are also -i (इ) and -ii (ई) ending Sanskrit words that are feminine too, such as अग्नि/agni (fire), शक्ति/shaktee (power),  शब्दावली/shabdaavalee (vocabulary) and प्रकृति/prakritee (nature).

Having trouble telling if a word is from Sanskrit or not? Some of your ability to tell will come with time as you become more accustomed to the differing sounds of words, but one easy way for right now is to keep in mind that the following letters and conjuncts ONLY appear in Sanskrit words: ऋ (ri), such as in the word ऋषि/rishi (fem., a sage), ङ/ṅ, such as in अंक (masc., number) ञ/ñ, as in पंच/panch (masc., five)*, ज्ञ (gy), such as in the word ज्ञान/gyaan (masc., knowledge), ण/na such as in the word रामायण/Raamaayan (masc., an epic poem about Ram, one of the incarnations of the Hindu god Vishnu), ष/sh such as in the word परिभाषा/paribhaashaa (fem., definition), क्ष/ksh such as in the word वृक्ष/vriksh (fem., tree), त्र/tra as in त्रिवेदी/trivedi (a common North and West Indian last name that denotes a “master of the three vedas” or an educated Brahmin) and श्र/shra as in श्री/shree or “Mr.” and श्रीमती/shreemati or “Mrs.” There are some other conjuncts that commonly denote words from Sanskrit, but I think this list is more than enough for now.

*These letters, ङ/ṅ and ञ/ñ, appear only as अनुस्वार/anusvaar or literally “half sound” in words and are never at the beginning of words; they are represented by the “dot” denoting a nasal sound in words like अंक/ank, रंग/rang (color), गंगा/gangaa (the sacred river, Ganges), पंजाब/panjab (Punjab, a state in Northwestern Indian) and पंच/panch. 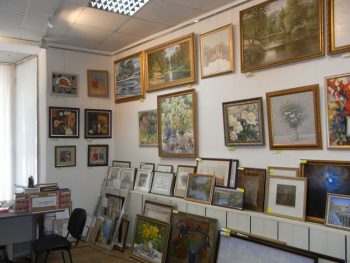 Masculine, Sanskrit words generally end in either an -aa (आ) or other vowels or a consonant, as indigenous words and those from Prakrit do. Examples include जन्म/janm (birth), तीर्थ/teerth (place of Hindu pilgrimage, especially along sacred rivers), भूत/bhoot (ghost), वर्ष/varsh (year; not to be mistaken with the feminine, Sanskrit word for rain, which is वर्षा/varshaa) and रहस्य/rehesya (secret). The important thing to keep in mind is that these words do not usually end in an -i (इ) or -ii (ई).

Here are some example sentences: 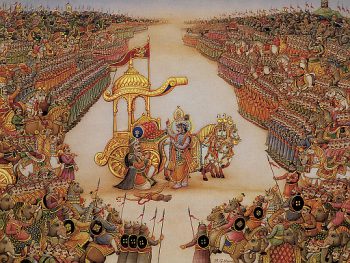 A scene from the Mahabharat; image by William Jon on Flickr

I hope you enjoyed this short lesson on the system of gender in Hindi based on the source language of Sanskrit. Stay tuned for my next post, which will be about the genders of Arabic, Persian and English words! And please let me know in the comments section if there are any questions or concepts you would like answered/explained 🙂