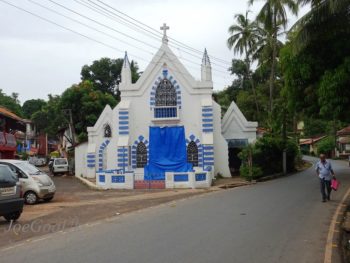 On the West coast of India lies the smallest state सबसे छोटा – Goa. Portuguese explorer Afonso Alberqueque conquered and ruled Goa. Goa is strategically रणनीतिक situated on the West coast with deep harbors for trading ships to dock in. This was important for the spice trade involving रणनीतिक ports in Africa and the Far East as well.

The Portuguese ruled Goa for approximately लगभग 450 years until it was annexed by India in 1961. The state was the capital seat for these traders in spices.

In December 1961, 30,000 Indian troops marched मार्च किया into the little state of Goa to liberate it from Portuguese rule. Depending on who you talk with nowadays, it was a liberation or an invasion.

To some Portuguese heritage Goans who were born into and grew up under Portuguese rule, it was an invasion.

The Portuguese came up from the Kerala city of Calicut to establish a rule for many decades. They built churches, schools and offered work to many Goan residents provided they convert to Christianity. Goa has some of the most beautiful cathedrals in typical Portuguese architectural style. The Se Cathedral, a world heritage site according to UNESCO is one of Asia’s largest churches.

The Portuguese were not kind to the Goan people. While they built beautiful cathedrals and contributed much to the culture in the form of traditions, music, dress, and style, they were obnoxious in treating the Goans.

There is a tale about a famous Goan song that speaks of crossing the river. This song is a sad tale of the fate of many Goans who had to flee to safety from the Portuguese, across the river.

Many Goans today, especially those of Catholic descent still speak Portuguese at home, listen to Fados and long for the good old days of Portuguese rule.

These Goans fiercely resist the invasion आक्रमण of tourists, developers, hoteliers, and casinos who are destroying the simple landscape with many modern-looking villas and resorts. While this is good for their income, it is destroying the simplicity of the area.

However, all over Goa, there are beautiful Portuguese-style villas and today’s Goan diaspora funds their restoration and preservation. Many Goans are intent on keeping ancestral पैतृक homes in India even though they may have settled overseas. To many, the dream is always to retire there in their homes.

The markets in Goa attract a lot of tourists and locals alike. There is a night market as well. It costs Rs. 100 to get in to see live music संगीत, flea market stuff, clothes, crockery, artifacts and what not.

In winter, tourists flock to Goa. About 2.4 million of them. Amongst these numbers, Russians are the majority at about 1 million, escaping the cold harsh कठोर winters. There are so many Russians and for so long that even the Indian traders have learned to speak Russian fluently. Also, many Russians easily pick up Hindi to make a fair bargain.

Goa is a must-visit. It is easy to access with direct flights from Europe. The best times to visit are November to February after which it gets sweltering तपती hot. So plan on it the next time the winter blues visit.