The Tea Legacy Posted by Nicole Herbert Dean on Mar 31, 2022 in Food 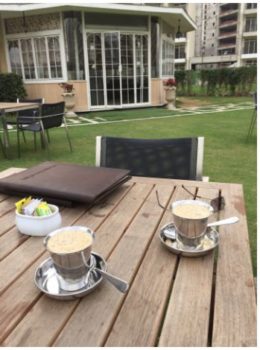 In a small cramped तंग परिस्थितियों stall in Nagpur a man stands over a hot stove, stirring a huge pot of tea. He takes a cup and scoops the tea चाय and pulls the cup high in the air allowing the tea to fall back into the pot.

When the tea is ready he holds four tiny glass tumblers in his hand and pours the tea into them from a height of at least 3 feet. This makes the tea frothy and delicious स्वादिष्ट, as it is a concoction of black tea mixed with milk दूध and sugar चीनी. No need for a frothing machine for this.

Next, a boy hands him three colorful cups and he performs the same service. One can hear him calling out the prices of the cups as he pours. Sometimes he even pours the tea into clear plastic bags to send off with his delivery boys.

This is a fascinating procedure प्रक्रिया in how he mixes and makes what people call the best tea in India.

Tea is a comforting drink. The British brought it to India in an attempt to outdo China. Since the British Raj, tea is served in posh households in Wedgewood porcelain cups accompanied by tiny cucumber sandwiches. Or tea sellers known as chaiwallahs sell tea in a steel or glass tumbler accompanied by a deep-fried batata vada or vada pao – battered spicy potato fritters in a small loaf of bread.

The hotter the tea the better. The sweeter the tea the more comforting. People drink tea at 4pm in the afternoon on summer days as well as winter days.

Many Indians learn how to make tea at an early age, and each family has its own recipe. Ginger tea is popular as well as cardamom tea.

Women serve their guest’s tea in a typical Indian household गृहस्थी, regardless of time. Young women who entertain prospective grooms serve tea on silver trays with snacks to the parents of the groom when they come over to visit.

Any tourist can find a tea stall easily. These stalls serve a few thousand teacups of tea in a day sometimes as in the case of Navnath Yewle from Pune. He sells about 12 lakhs of tea a month. This is equivalent to approximately लगभग 15 thousand dollars a month. His customers? Tea drinking office goers, laborers मज़दूर, students छात्र and families. Everyone has the time to stop for a cup of tea.

Even cricket games used to stop for a tea break. It is fascinating to see a sports game stop for a cup of tea.

The perfect cup of tea is called ‘kadak’ chai. In this context it means a strong cup of tea. Here is a recipe to get the perfect kadak chai.

In Kolkata the tea is served in tiny clay cups.  People often drink chai out of the saucer instead of the cup. This is done to cool down the chai quickly if one is in a hurry.

While the world invents new cool beverages and fancy brand packaged tea in tea cafes, nothing compares to the hot sweet cup of tea at a roadside stall in India.