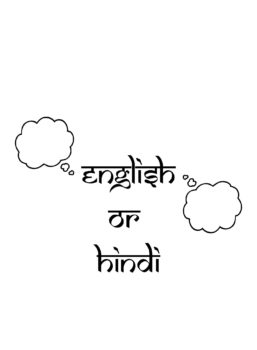 Did you know that it was a Christian missionary प्रचारक, William Carey, who innovated the Hindi language with technology in India? He created printing मुद्रण fonts and the Hindi bible, the first prose work in print in India. The contribution योगदान of Christian missionaries like Carey are the most underreported stories in the history of India. In fact, Carey brought the first printing press to India. Unfortunately, the credit श्रेय देनाof the first printing press goes to Raja Ram Mohan Roy, a friend of Carey and not Carey, in Indian history इतिहास books.

So, it is ironic ताने के तौर पर that today, the Hindutva campaign seeks to stamp out the English language in India, and establish स्थापित करना Hindi as the national language.

India does not have a national language…yet. It has two official अधिकृत languages, Hindi and English. Also, each state has its own native देशी language, such as Tamil which is a Dravidian classical language dating back 4500 years. There is a move by some Hindu politicians राजनेताओं to make Hindi the official national language. Why? When even the Hindi that is spoken today is not real pure Hindi शुद्ध हिंदी but a mixture of Urdu, Punjabi, Marathi and English?

Let’s get the fact straight

When you look at the data only 25% claim Hindi as a mother tongue, while 44% say they speak it. Out of this 25%, I wonder how many speak pure Hindi. Most Indians that speak Hindi at home don’t even know the original Sanskrit originating words in Hindi that are used in academic text books. In fact simple words such as परिवहन for transportation and चिकित्सक for doctor are obsolete. And, anyone using these terms is at risk for being ridiculed उपहास for being old fashioned.

It is also ironic that these same politicians send their children to Christian run schools where they learn in English.  They pay huge bribes मुंहभराई to get their children into well paying jobs that require English as a language. People run flourishing businesses फलता-फूलता व्यवसाय such as BPO (Business Process Outsourcing) which train employees to speak British or American English. So why the move in a seemingly backward फलता-फूलता व्यवसाय direction? When, the preset government is trying to establish India as a major player प्रमुख खिलाड़ी in the global economy?

The rise of this type of nationalism is not new. But it is taking on a more aggressive form because of the ease of propagating प्रचार issues on social media and WhatsApp.  In its nationalistic राष्ट्रवादी fervor let’s not forget the subtleties of gharwapsi. By reconverting Christian and Muslim converts, who naturally love to learn the dominant languages of their religion, they may be shooting themselves in the foot so to speak.

There have been attempts in the past to enforce Hindi on south India which have been met with not only resistance but violence हिंसा as well.

I do think it is important though to learn Hindi as a second language. After all one sixth of the world’s population आबादी do speak it. That is not a small number. One only stands to benefit from being bilingual in order to do business in India.

Not only that, I like to teach the local dialects of Hindi to help my students integrate आबादी easily and conduct business efficiently.

If one is to truly understand India and keep her constitutional values संवैधानिक मूल्य one must adopt the secular and embrace cultural  and linguistic diversity. In that sense, if India were to indeed be a major participant in the push for progress on the world’s stage then Gharwapsi has no place on the subcontinent.

The fight to retain India as a secular country धर्मनिरपेक्ष देश must continue.  Indians need to respect all religions, tongues and ideologies in order to flourish. But more importantly, India needs to step into the 21st century and embrace her blessing of linguistic diversity.