In last week’s blog, I talked about the sheer plethora of Indian restaurants in the Indian diaspora (or places outside India where Indians have immigrated and which they have transformed into Indian cultural hubs), how Indian American cuisine is different from the type of cuisine you may commonly find in India and about some appetizers you may see on a typical Indian restaurant’s menu and how to order them. In the second part to this blog series, I’ll be discussing main dishes you may find on Indian menus. 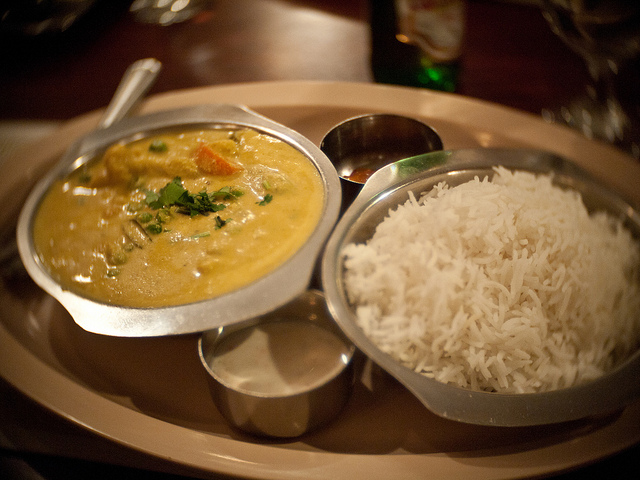 Also spelled क़ोरमा and originally from the Turkish word “qavurma,” this dish is a staple on the menu of most, if not all, Indian restaurants in the States. The word itself actually means “braise,” referring, of course, to the method used to cook the dish––first searing the meat or vegetables in ghee (घी, masc.) or clarified butter on high heat and then adding the dairy, spices and other ingredients and cooking slowly over low heat.

A “mughlai” (मुग़लई) dish or dish popularized by the Mughals, like most North Indian fare available in the U.S., this dish is low on spice except as a flavorful background note and an addition to its copious amounts of cream (मलाई/malaai, fem.). As one would expect, the spices that provide these flavorful notes are low on heat, such as cumin (जीरा/jeeraa, masc.) and ground coriander or parsley (धनिया/dhaniyaa, masc.). It usually contains almonds (बादाम/baadaam, masc.) and cashews (काजू/kaajoo, masc.) and can be made either vegetarian (शाकाहारी/shaakaahaari), with lightly fried balls of chopped vegetables or कोफ़्ता/koftaa, masc., such as spinach (पालक/paalak, masc.) and turnip (शलजम/shaljam, masc.), or non-vegetarian (मांसाहारी/maansaahaari) with pieces of chicken (मुर्ग/murg). Korma can be made with yogurt or curd (दही/dahi, masc.) instead of richer cream, but the way it is made in American Indian cuisine is almost always with cream.

One particularly tasty variation of the classic “korma” is the Navratan Korma (नवरत्न कोरमा)––”navratan” meaning “nine jewels” and referring to the nine planets of Hindu astrology as well as the nine different vegetables used to prepare the dish. This korma often also contains nuts and paneer/पनीर (masc.), a type of mild-flavored cheese that needs to be tasted to be described (some people compare it to cottage cheese or farmer’s cheese, but those descriptions are inaccurate and frankly don’t do it justice). The dish is so interesting because it is a symphony of slightly opposing yet, in the end, harmonious flavors and textures such as sweetness (it often contains raisins or किशमिश/kishmish, fem. and carrots or गाजर/gaajar, fem.), creaminess (the cream or curd, of course) and savoriness (such as the spices and other vegetables like peas or मटर/matar, masc. and green beans or हरी फली/hari phali, fem. and potatoes or आलू/aaloo, masc.). 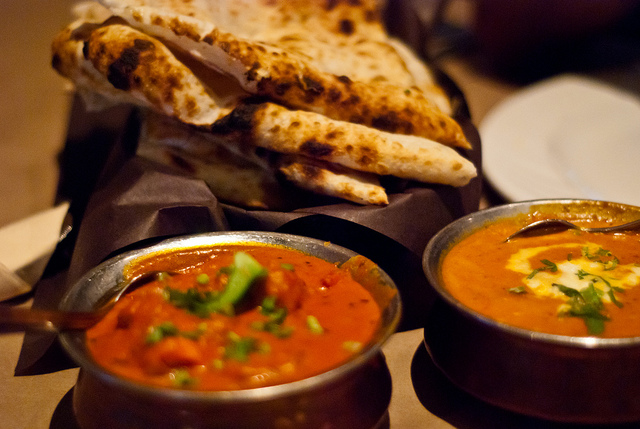 Chicken Tikka Masala on the left and Malai Kofta on the right (Kofta are balls of spiced meat or veggies lightly fried) with naan in the background. Image by SteFou! on Flickr, licensed under CC BY 2.0.

Popularly touted as Britain’s “national dish,” this example of cultural and culinary hybridity has been adopted by other countries as well, such as the U.S. It is popular for its richness, flavor yet lack of overpowering spice and, of course, will satisfy any meat lover. This dish is really just a simple curry (curry or “kari” is actually a Tamil word meaning sauce, you may be surprised to know) with a few basic spices found in almost every curry (such as ginger or अदरक/adarak, masc., cumin or जीरा/jeera, masc. and green chili or हरी मिर्च/hari mirch, fem.), lots of cream, dahi or curd, pureed tomatoes/टमाटर, masc., ghee and pieces (hence टिक्का/tikkaa which means “piece”) of chicken, one of the world’s most beloved protein sources).

Although it is up for debate whether or not the British have made any improvements to Indian cuisine, they have certainly changed India’s cultural landscape forever, for better or worse, and the melding of British and Indian cultures is inextricable. As a side note, if you ever wondered about the provenance of “curry powder” or a strange, bright yellow colored powder that contains large amounts of turmeric or हल्दी/haldi, fem. (hence the yellow color), cumin, fenugreek/मेथी, fem. and chili––this is an entirely British invention and if you ever see a supposedly “Indian” dish that contains this ingredient, you can rest assured that it is definitely not Indian. 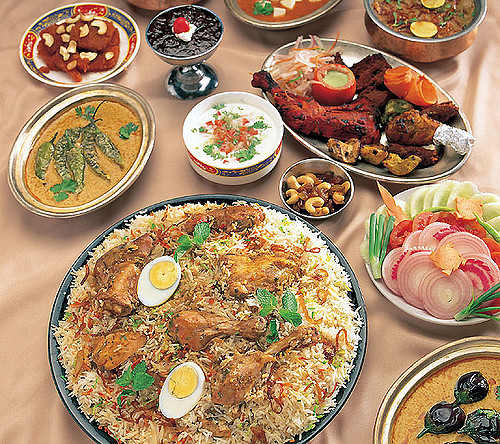 Though Biryani should, frankly, have its own blog post, I will briefly describe this marvelous dish here. Biryani is a Mughlai dish that is immensely popular, both in India and abroad. Its variations are seemingly endless but, at its core, it is a decadent rice dish that often contains bone-in meat, such as goat, chicken and beef (though it can be made vegetarian), aromatic spices such as nutmeg (जायफल/jaayphal, masc.), cloves (लौंग/laung, masc.), cardamom (इलायची/ilaaychi, fem.), bay leaves (तेज पत्ते/tej patte, masc.) and saffron (केसर/kesar, masc.), and, sometimes, nuts. Its cousin is पुलाव/pulao, masc., another item that is more of a side dish, is less elaborate and is usually a single pot dish in that it does not contain two layers of rice and a middle layer of meat or vegetables, as does Biryani. Bengali Biryani, which I enjoy, often contains hardboiled eggs with no meat and fewer spices. One of my favorite variations of this dish, however, is Dum Biryani/दम बिरयानी. “Dum,” which can mean breath or life in Hindi, originally comes from Persian and denotes the low heat, slow oven cooking used to make this dish. This dish hails from Hyderabad, is a riot of flavors and spice and is prepared by baking it in an earthenware dish, often with a crust on top. It is probably one of the most sumptuous dishes you will ever eat!