Indian American Cuisine Posted by Rachael on Jun 16, 2018 in Uncategorized

Last week’s blog focused on how to order in a restaurant, either in India or wherever you live, as the Indian diaspora has graced countries across the globe with its delicious and varied cuisine. This week’s blog will focus on Indian American cuisine specifically or, put another way, Americanized Indian food that is popular and widespread here in the States. Americanized Indian food tends to be a bit blander and less spicy as most Americans are not used to the level of spice in a typical Indian dish. Additionally, Indian American cuisine tends to be of the “Mughlai” (मुग़लाई) type––that is, food that was popular during the Mughal era or was popularized by the Mughals, such as biryani and a slew of rich, creamy curries that are low on spice but big on calories. This kind of extremely rich food is not as common in India, unless you specifically ask for it. A last note is that a significant portion of India’s population (especially Hindus and Jains) are vegetarian, and some people are strict vegetarians, meaning they do not eat eggs. Of course, America’s population tends, on the whole, to be carnivorous, so we expect to see meat on the menu when we go to a restaurant. Although there are some Indian restaurants even in the States that serve only vegetarian dishes, but they are so tasty and have such variety that you will scarcely miss the meat. Below is a short description of some common appetizers or “starters” you’ll find on an Indian menu and how to ask for them in a restaurant. 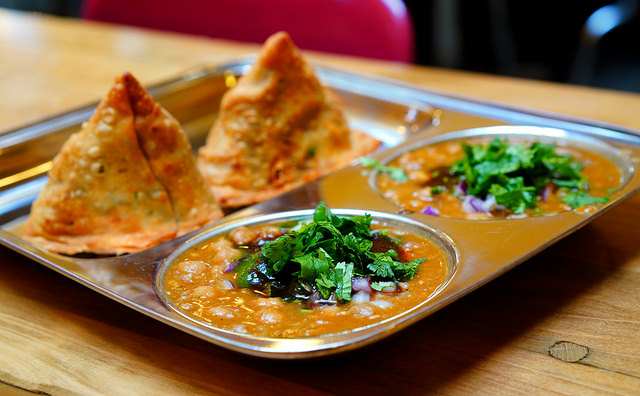 Ahh, that old staple, the samosa. Every culture has a variation of a fried or baked savory pastry and this is India’s. Americans have, of course, invented variations on this classic using phyllo dough and other concoctions, but they are typically fried, triangle-shaped savory pastries filled with a mixture of spices sauteed with (मसाले/masaale or spices, जीरा/jeera or cumin, which I mentioned last time, is usually in samosas) finely chopped onions (प्याज़/pyaaz), potatoes (आलू/aaloo) and peas (मटर/mattar). But, you can also make meat-filled samosas, usually with richly-flavored, sauteed ground beef (गोमांस/gomaans). Samose are usually served with chutney (चटनी, fem.), a type of sauce, such as tamarind (इमली की चटनी/imlee ki chutney) chutney or mint chutney (पुदीने की चटनी/pudeene ki chutney). Achaar/अचार is another condiment you may see on an Indian menu, although it isn’t quite as popular with Americans as chutney. Achaar/अचार is a mixture of spices and pickled vegetables and/or fruit and usually has a sharp, slightly sour and often extremely spicy taste that may not appeal to all.

If you want to ask for a samosa or two, you just have to follow a simple formula:

By now, you should be familiar with the pronouns in Hindi and their transformations with the postposition “को/ko” (“to”):

आप + को = आपको (no contraction for this one)

If you want to say, “I want two samosas,” you would phrase this as such: मुझे दो समोसे चाहिये.

*The great thing about this construction is that the postposition को or “to” blocks the verb (चाहिये) from agreeing with the pronoun, and thus it must instead agree with the object that is needed/wanted. Of course, if you use the past tense here, चाहिये will never change but you will need to add a था/थे/थी/थीं (last one not commonly used in speech) to agree with the number and gender of the objects that are wanted/needed. 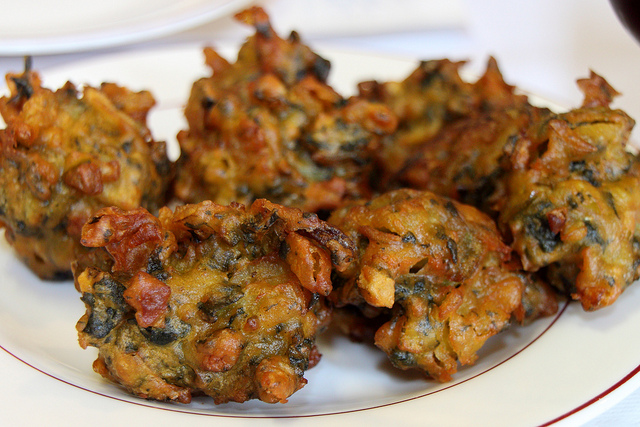 Like the now-ubiquitous samosa, pakore are often served as an appetizer in Indian restaurants. They are basically chopped vegetables, like cauliflower (गोबी/gobi) and potato, dipped in a spicy batter and fried. The vegetarian options are more commonly found although you can also come across meat pakore with kebab meat or chicken inside the fried exterior. This snack is popularly made to accompany chai/चाय, or hot, milky tea with a bit of spice, on rainy days in India. If you want to ask if a pakora might be too spicy for you, you can phrase it this way:

Or if you want to MAKE SURE they’re spicy, you can say something like this: 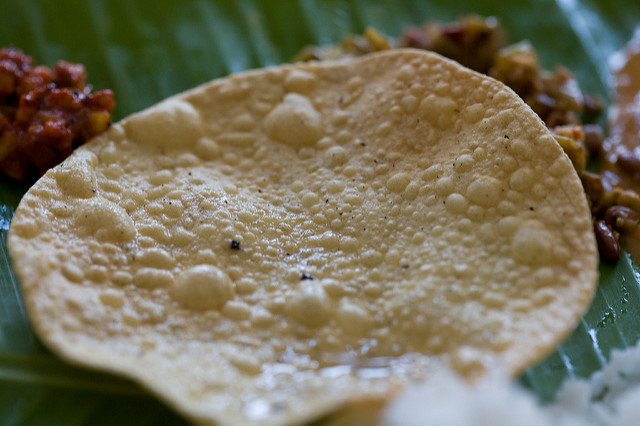 Commonly printed on menus with the South Indian name of “pappadum,” these are circular, wafer-thin delicacies usually served before every meal in an Indian restaurant in the U.S. They are delicately spiced with जीरा/jeera or cumin seeds, which appear as small black dots on the surface of the wafer. They are very tasty and, like samose and pakore, are usually served with tamarind and mint chutneys. There is also a variation of पापड़ called आम पापड़/aam paapad which you can find easily in any Indian grocery store––it doesn’t resemble the regular पापड़ in the slightest except that it comes in flat sheets or squares of a sticky, chewy mango candy. It is delicious! 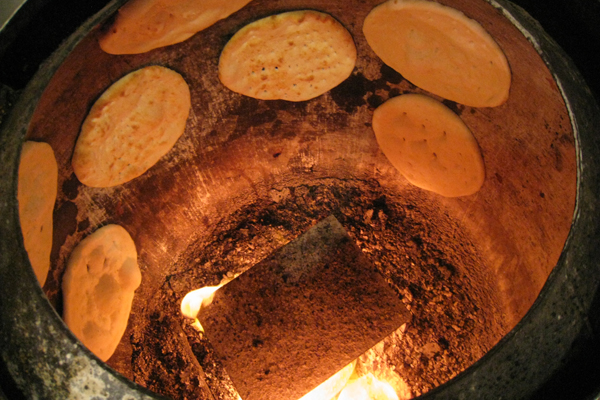 A tandoor is a deep clay oven or pit in which practically anything can be made––marinated meat can be roasted, bread such as naan can be puffed and browned and vegetables can be grilled. So, on any Indian menu, you’ll see foods a plenty that can be roasted in the tandoor. Usually the chef who does the roasting will place food in the oven with a long poker so as to avoid being burnt. Sometimes, as in one Indian restaurant I visited in Houston, there will be a glass enclosure around the oven so that you can see everything that is cooking inside and the skill it takes to stand over the hot oven, managing multiple orders of bread, meat and vegetables.