Levels of Language: Register in Hindi, Part 3 Posted by Rachael on Dec 29, 2017 in Hindi Language, Uncategorized

In today’s post, I’ll be discussing the newest transformation that Hindi has undertaken: Hinglish. This term refers to a combination of Hindi and English vocabulary, syntax and, sometimes, grammar and idiom. It can refer to speech that includes a vast majority of English and a minority of Hindi or vice versa. But, for the purposes of this Hindi blog, I will primarily discuss Hinglish that encompasses a majority of Hindi and a minority of English. 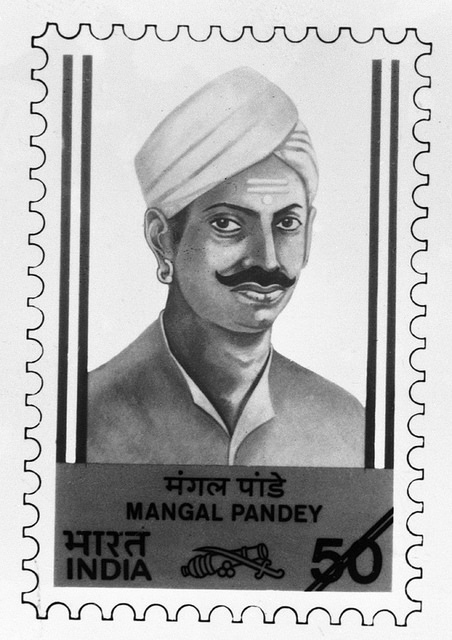 A stamp of Mangal Pandey, a fighter in the First War of Independence; image by Public.Resource.Org on Flickr, licensed under CC BY 2.0

English has been present in India for centuries, so it is not surprising that it has now made its way indelibly into many Indian languages, including Hindi. Since the British East India company set up shop in India around 1600, English was being spoken (and learned) in various parts of India where the company was active. After India’s First War of Independence in 1857 (variously called the “Sepoy Mutiny” and “The Indian Rebellion of 1857,” amongst other titles), the British crown took over for the British East India Company and India became one of the many “jewels” in the crown of Queen Victoria. Of course, colonists from England and nearby countries (including Scotland, Ireland and Wales) had been traveling to and settling in India long before the British crown took control of it: they served as missionaries, teachers and professors, members of the Army and as administrators and rulers for the British colonial government.

One of the most infamous tracts on the “superiority” of the English language and the need for its greater dissemination in India in order to train a “new class” of Indians who were Indian on the outside, but British on the inside (in terms of culture and education), who could serve as able civil servants for her Majesty, was written in 1835 by Thomas Macaulay, a British historian and politician in India. In this minute, (read it here), Macaulay advocated for the abolishment of Indian education in classical languages, such as Sanskrit and Arabic, which the British government paid Indians to study in the form of fellowships (as knowledge of these languages did not lead to profitable jobs at the time). Instead, he asserted that the British government in India should advocate greater knowledge of English in order to better train Indian civil servants and, eventually, to “Indianize” the civil service in order to move India incrementally toward a preparedness for Independence (this latter idea, however, would come later).

Of course, the view that English is somehow “superior” to any Indian language is not only outdated and outlandish, but bigoted in the worst possible way. However, since India achieved its independence in 1947 and the country’s economy was liberalized in the early 1990s to welcome foreign investment and the greater Western influence on Indian culture that accompanied it, English has indeed held a position of prominence and prestige that, while not reflective of colonial “Anglophilia” per se, leads one to question the role that indigenous languages will play in an increasingly globalizing world in which English, for better or worse, is the lingua franca. As stated in my previous blogs about “register” (read parts 1 and 2) in Hindi, Hinglish is most common amongst the younger, wealthier, more educated and more mobile demographic of Indians, although it is certainly present to a great extent amongst older generations. One’s participation in Hinglish is, in some ways, a status symbol of one’s greater knowledge of English. Today, English is a language often associated with ambition, success, wealth and higher socioeconomic status, as a knowledge of English is often necessary to take part in high-prestige jobs that grant greater socioeconomic mobility in India and elsewhere. 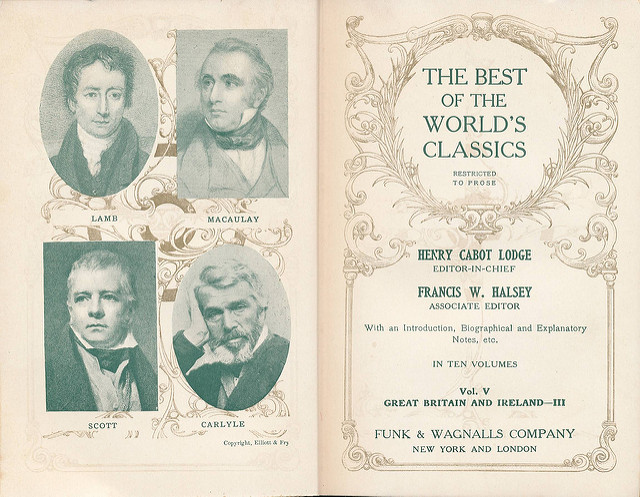 Although considered a “classic” writer according to the authors of this compilation, Macaulay’s status as such is very much in question today; image by Pamla J. Eisenberg on Flickr, licensed under CC BY SA-2.0

On the other hand, however, Hinglish can be seen as a revolt against the colonial and postcolonial hegemony of English as can be seen in the name itself: it is not only a celebration of English, but of Hindi as well. It celebrates the blend of both languages, rather than the dominance of one language over the other. On the flip side, the presence and popularity of “Indian English” novels, such as those of Chetan Bhagat, suggests a pride in one’s identity as a moderately educated Indian from a Tier II or III city who is not afraid to celebrate one’s difference in being Indian rather than entirely “Westernized.” Although “Indian English” is obviously different from Hinglish in that it acknowledges the dominance of English, the unabashedly “non-standard” way in which the characters in these novels speak and think suggests an embrace of an inescapable reality while at the same time creatively molding that reality (and that language) to suit one’s own ends.  Yet, the danger of Hinglish comes in the phenomenon of devaluing and perhaps even forgetting certain Hindi words and phrases in the process of privileging a high-status language such as English. Such a phenomenon is evident in some urban Indian youth’s insistence on saying things like “Sunday को/ko” and “Wednesday को/ko” rather than the equally simple “रविवार को/ravivaar ko” and “बुधवार को/budhvaar ko.” 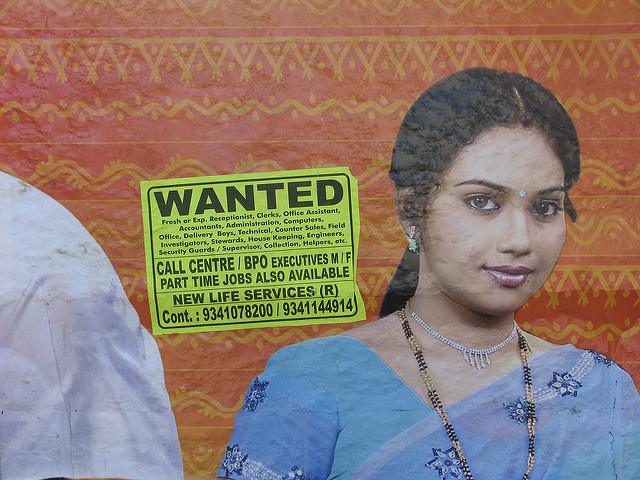 A call center ad, work that, obviously, requires at least partial knowledge of English and, typically, “accent training”; image by Paul Keller on Flickr, licensed under CC BY 2.0

Regardless of the positives and negatives of the Hinglish “pidgin,” a knowledge of it is essential in order to claim any degree of fluency in Hindi as it is spoken today and as it continually evolves, shedding old words in order to adapt to a modern world. Let’s look at an example of Hinglish in the dialogue below:

Priya: Come on, yaar (friend), you said before that we were going to watch a movie tonight. What kind of movie do you want to see?

Aisha: I don’t know yaar, I’m very tensed (worried) these days. Do you remember that boy I was chatting to through the app (dating app)? He stopped chatting with me the day before yesterday. I don’t know…what should I do?

Priya: Oh, yaar, forget about him! What kind of nonsense is this, have you gone soft (sentimental)? Why do you care about him, he wasn’t even that handsome. Come on, let’s look at your matches, we’ll get you a cuter boy really quick.

Aisha: But he wasn’t just hot, he talked very well and he seemed sweet too…I really liked him.

Priya: Oh you idiot! Don’t make yourself a fool! Boys are just boys, they’re not God. I myself go on a date with a different boy every week.

Aisha: Really!? How can you do such a thing? Haven’t you fallen in love yet?

Priya: No, no, stop this nonsense. Love will just have to wait! These idiot types (boys) are just for passing the time.

Priya: Yes, yes, I know you idiot. You don’t know how to have fun, do you?

Aisha: Oh, what did you say, shut up! I’ll show you! I’ll randomly choose a boy and go on a date with him tomorrow night!

Priya: Ok, show me idiot! But don’t randomly choose, he should be really hot! Anyways, let’s forget about boys for tonight—because we’re going to see a movie! What do you want to see?

Quiz Yourself! Can you think of the Hindi alternatives to the English words listed below? (Answer key underneath):