The Chambers of Resilience Posted by Nicole Herbert Dean on Nov 26, 2021 in News, Travel & Geography 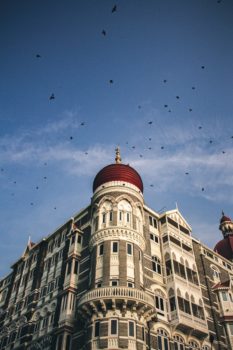 Photo by Arju Babu from Pexels

The people of Mumbai are tough कठोर as all major city residents are. However, there is a difference अंतर to the persona of the Mumbaikar. They come from all over India with dreams सपना to make it in this big city. They have to fight caste prejudices पक्षपात, language barriers and cultural hurdles बाधा to make it. But the one thing most develop over time is resilience लचीलापन, grit and a great sense of humor.

These qualities can not be developed in a classroom कक्षा but Mumbaikars display it when under pressure. And there was no better time to see this than 13 years ago, on the 26th day of November 2008.

26/11 will always be etched नक्काशी की गयी in the memory of a Mumbaikar. It was a dark day which continued for four days while ten men held the city hostage बंधक. These ten men were young, trained and fearless. They were also from Pakistan.

Mumbai residents watched in horror डरावनी as the events unfolded in five different locations: The Oberoi-Trident, a five star hotel in South Mumbai, The iconic Taj Mahal Palace and Tower Hotel, the Chabad House – a Jewish cultural center in the middle of the city, Leopold Cafe – a teenage किशोर का haunt of this author, and Victoria Terminus – the Indian equivalent समकक्ष to Grand Central Station in NYC.

The focus of the 60 hour siege and most of the carnage नरसंहार was at the 115 year old Taj Mahal Hotel. According to reports, 166 people were killed and 300 injured. The numbers are not that accurate शुद्ध though. Thirteen years on the stories of that horrific भीषण day still continue.

Ankur Chawla, who was present at the Taj Mahal that day, wrote a poignant Instagram post about his ordeal. The Indian community starting with the hospitality staff showed remarkable courage साहस and resilience. They put their guests first, hiding most of their guests in the The Chambers which is a private club at the Taj.

Raghu Deora faced death working as a chef at this private club within the Taj. He was shot at point blank range but managed to survive after three months in a hospital. Here is an example of not only resilience but tough Mumbai humor हास्य. He said, ““My entire family is from the army background and nobody’s got shot other than me.”

Harvard did a case study मामले का अध्ययन on the event. Why did the hotel staff who knew all the back routes of escape out of the hotel, not use them? Why did they chose to protect their guests and usher them to safety when the time came? Some even went back in to usher more out to safety?

What was this mindset of courage, calm, resilience and duty first? The cultural belief system of valuing मूल्य the guest as God.  In Sanskrit it is, “Atithi Devo Bhava”.  When Harvard studied this cultural phenomenon घटना they discovered that the Taj recruited young employees for their attitudes not grades. How did they treat their teachers in school? How did they treat elders? Another factor was during training, the recruits रंगरूटों were trained to be brand ambassadors for the guests, not for the company. Another factor was employee recognition मान्यता within 48 hours of receiving a good report.

So these values and beliefs are a motivating source स्रोत for the rest of the world.