The Evolution of Hindi Numerals Posted by Rachael on Jul 20, 2019 in Hindi Language

What many refer to as “Arabic numerals,” (अंक/ank=numeral) actually have their origin (मूल/mool) in the Indian subcontinent, from whence they eventually spread to Persia and the Arab world. Although modern Arabic numerals (i.e., 1, 2, 3, etc.) are in common use throughout India today, it is useful to learn their forms in Devanagari as you will see examples of such numerals in print, on the user interfaces of computers, mobile phones and other devices (if set to Hindi as the primary language), on people’s houses (designating the address), etc. It is also important to learn the history (इतिहास/itihaas) of these numerals and how they spread from the subcontinent to the rest of the world, serving as the foundation (आधार/aadhaar or बुनियाद/buniyaad) for our system of modern numerals. This system (व्यवस्था/vyavasthaa), although taken for granted, is one of the most revolutionary and innovative ideas in the vast span of history in that it enables us to tell time, make calculations simply and efficiently and, more generally, organize and make sense of the world around us. 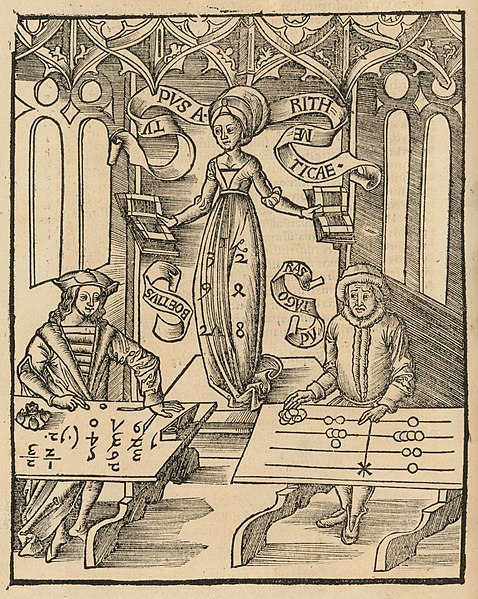 An image from 1503 depicting the merits and demerits of employing the abacus system versus the numeral system in Europe, which began to be introduced in 976 CE. Image found via Wikimedia Commons, Public Domain; Typ 520.03.736, Houghton Library, Harvard University.

Evidence for the decimal place (दशमलव बिंदु/dashmalav bindu=decimal point) system can be found as early as 500 CE in the Indian subcontinent. Many observers of the day found the calculations and numerical systems conceived by Indians to be some of the most advanced and noteworthy inventions (ईजाद/eejaad) of that age. Prior to the decimal system, the Brahmi numeral system (said to have been developed from the 3rd century BCE onwards) was employed. However, it suffered from various flaws (कमी/kamee), including that it did not accord a place-value to its numbers and did not possess the concept of “zero.” In this way, the system was overly complicated and less efficient. In addition, another flaw was that it possessed additional symbols for tens, hundreds and thousands which, today, we denote by simply combining the numbers in the “10” digit system developed by later Indians.

As the modern Indian numerical (संख्यात्मक/sankhyaatmak=numerical, संख्या/sankhyaa=figure, amount, number) system in which place values were accorded to numerals developed (emerging in its full form in the 8th to 9th centuries CE) and word of it spread, it began to be employed in nearby Persia and, from there, it was adopted by conquering Arabs. The addition of zero as an essential part of the 10 digit scheme is documented as early as the 7th century in works by Brahmagupta (an Indian mathematician and astronomer who lived from 598-668 CE), who was the first to invent rules (नियम/niyam) by which to perform calculations (गणना/gananaa or हिसाब/hisaab) with zero. Moreover, the concept of zero is documented even prior to the 5th century in the Bakhshali Manuscript (the oldest existing mathematical manuscript from the subcontinent whose date of authorship is still debated and may have been written in the 7th century), which designated zero as a dot (बिंदु/bindu). However, the true origin of zero is now believed to lie in Khmer materials from Cambodia, where its use is documented as early as the 7th century. 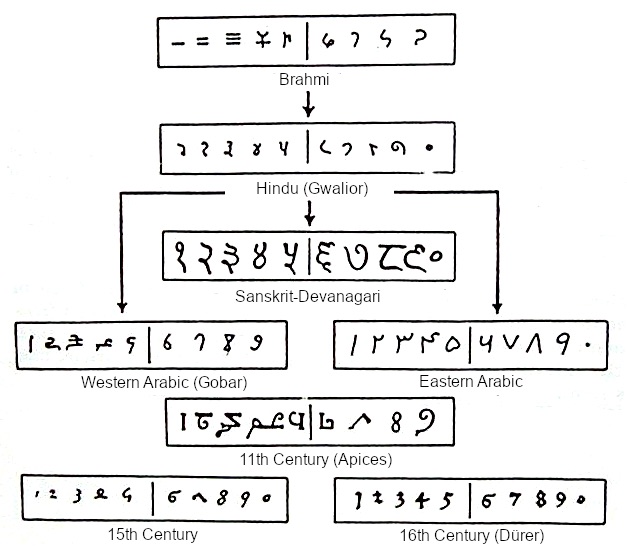 The modern (आधुनिक/aadhunik) misconception (ग़लतफ़ैमी/galatfaimee) that these numerals are “Arabic” in origin stems from the fact that Europeans learned of them from the Arabs who had, in turn, learned of them from the Persians and the Indians. Arabs, however, refer to these numerals as “Indian” numerals, thus acknowledging the true origin of this revolutionary 10-digit system. Amongst academics, this system is known as the “Hindu-Arabic” or “Indo-Arabic” system.

The Devanagari characters for numerals from 0 to 9 are laid out below. Afterwards, please see a table that lays out the numerals’ Western Arabic form, Devanagari variations and the Hindi words for each numeral.