Ayurveda (आयुर्वेद=the knowledge of life and longevity), a traditional medical system (पारंपरिक चिकित्सा व्यवस्था/paaramparik chikitsaa vyavasthaa) from the Indian subcontinent, has been popular in some circles in the West since the 1960s; in the United States, for example, we can now find Ayurvedic products, schools and practitioners of this ancient (प्राचीन/praacheen) system of “alternative medicine” (as it’s known in the West). Although some dismiss Ayurveda as pseudoscience and, indeed, its prescriptions and concepts are not often based on modern science as we know it, a majority of people in India, elsewhere in the subcontinent and some in the West swear by Ayurvedic products and treatments (इलाज/ilaaj) as part of a natural (प्राकृतिक/praakritik), holistic and preventative medical system that provides a welcome respite from the artificial, chemical-based prescriptions and surgery-based treatment of allopathic (Western) medicine. Whatever your opinion on Ayurveda and other forms of traditional medicine, it is important to learn about this ancient system as it provides a window into the cultures of millions of people worldwide who rely on this type of medicine to treat and prevent ailments (बीमारियाँ/beemaariyaan, pl, बीमारी/beemaari, sing).

Common Ayurvedic ingredients may include the above: clove (लौंग/laung), cardamom (इलायची/ilaaychee) and cashew (काजू/kaajoo), to name just a few. Image obtained via Pixabay.com.

It is unclear exactly when Ayurveda began to be developed, but some argue it dates back to at least the Vedic period and possibly even the period during which the Indus Valley Civilization flourished. The chief classical Ayurvedic texts, such as the Sushruta Samhita (सुश्रुतसंहिता/Sushruta’s Compendium), explain the origin of Ayurveda as beginning with the gods (देव/dev), who then passed their knowledge (ज्ञान/gyaan) to sages (ऋषि/rishi) and human physicians (चिकित्सक/chikitsak). The Sushruta Samhita, explains that Dhanvantari (धन्वन्तरि), the Hindu god of Ayurveda, took on an earthly form as the king of Varanasi, where he conveyed his knowledge of medicine to physicians there, one of whom was Sushruta.

The medicines (दवा/davaa) that Ayurveda commonly advocates are often mixtures of herbs (जड़ी-बूटी/jari booti) and plants (पौधे/paudhe=pl, पौधा/paudhaa=sing) (such as leaves, roots, fruit, bark or seeds) native to the subcontinent as well as minerals and metals. Well-prepared Ayurvedic treatments made with high-quality ingredients can be highly effective. However, there is a danger in consuming “fashionable” products marketing themselves as Ayurvedic in order to command a higher price or products that have not been thoroughly vetted, as a 2008 study found that about 21% of Ayurvedic American and Indian-made medicines sold online contained toxic levels of heavy metals (धातु/dhaatu) such as arsenic, mercury and lead. This presence of toxic levels of heavy metals in some Ayurvedic medicines forms the basis of one of the chief criticisms (आलोचना/aalochnaa) of this medical system.

Ayurvedic medicine has several fundamental principles on which it is based; one of these concepts is the idea of “doshas” (दोष:) or elements that define a person’s physical makeup and temperament, which are akin to “humors” as they were known in traditional European medicine. These doshas are “vaata,” (वात, associated with the qualities dry, cold, light, minute and movement) “pitta” (पित्त, associated with the qualities heat, moistness, liquidity and sharpness and sourness) and “kapha” (कफ, associated with the qualities heaviness, coldness, tenderness, softness, slowness, lubrication and the carrier of nutrients). Another central principle of Ayurveda argues that the equality or balance (समानता/samaantaa) of these doshas ensures the health of an individual, whereas their imbalance or inequality (असमानता/asamaantaa or विषमता/vishamataa) results in ill-health and perhaps disease. 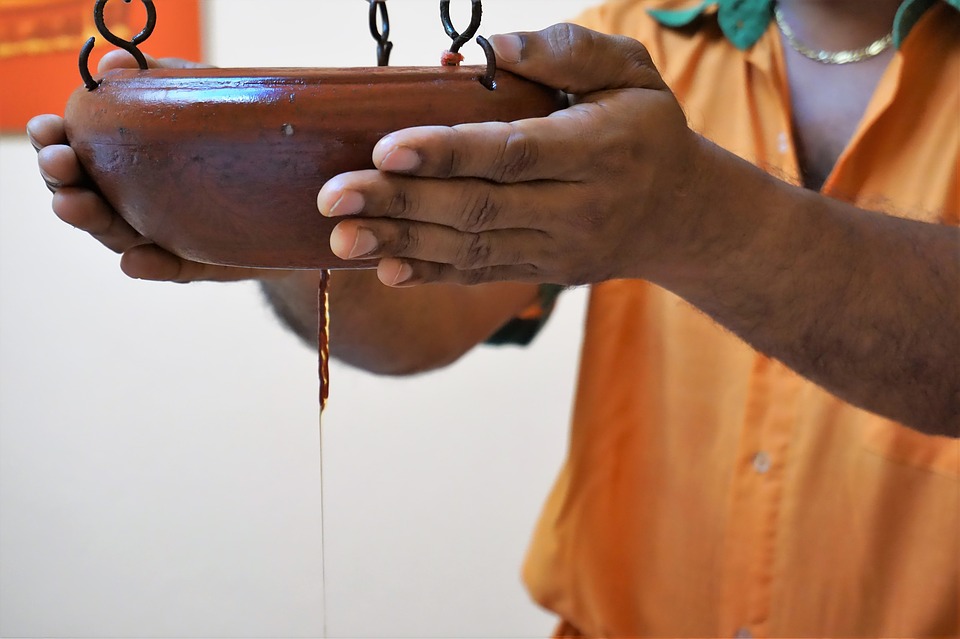 Ayurveda uses various oils for purposes such as massage and inducing relaxation and rejuvenation. Image obtained via Pixabay.com.

The properties associated with the above “elements” are based on another Ayurvedic concept that there are twenty gunas (गुण=quality or characteristic) that make up all matter, which are conceived in terms of ten pairs: heavy/light, cold/hot, unctuous/dry, dull/sharp, stable/mobile, soft/hard, non-slimy/slimy, smooth/coarse, minute/gross and viscous/liquid. Upon your introduction to Ayurveda, a practitioner will attempt to determine the type and balances of doshas you possess in order to give you more information on how to regulate certain maladaptive traits (both physical, शारीरिक/shaareerik and mental, मानसिक/maansik) as well as the diet and lifestyle (जीवन-शैली/jeevan shailee) you should adopt, as foods and other aspects of life also contain these दोष: and गुण in varying degrees.

In all, classical Ayurvedic texts dictate eight central components (अंग/ang) of the physicians’ trade, which are as follows (all names are in Sanskrit; indeed, much of the terminology surrounding Ayurveda is in Sanskrit as all of the classical texts were composed in that language):

Amongst Ayurveda’s other fundamental principles is balance (संतुलन/santulan), which governs all aspects of life – sleeping, eating, exercise, etc. In line with this idea of balance is the concept that denying one’s natural urges is unhealthy (अस्वस्थ/asvasth) and may lead to illness but, at the same time, giving into to any and all urges, such as overeating or regularly sleeping too much, will also cause illness. Interestingly, Ayurveda regards physical existence, mental existence and personality as discrete in some ways but also recognizes that they are interconnected and thus able to influence one another. This idea of their mutual influence informs the holistic approach to diagnosis (x का निदान करना) and treatment that is characteristic of Ayurveda. 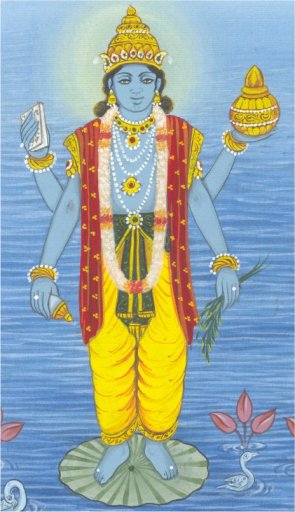 Dhanvantari, the Hindu god of Ayurveda and medicine generally. Image by F16 on Wikimedia Commons, licensed under CC BY-SA 3.0.