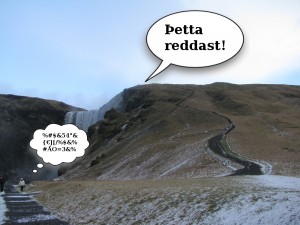 One of the most Icelandic expressions I can think of is Þetta reddast, “it’ll work out”/”it’ll fix itself”. It’s used in any kind of a situation where someone’s facing a problem,  no matter how difficult. It can be anything ranging from a confusing schedule at work to a situation that’s so desperate it would take a miracle to somehow right it. Yet Icelanders seem to think there’s always a good chance of a miracle of this kind – or perhaps they’re just taking the outlook that in the end most of our problems really weren’t as bad as they felt like at the time. In any case Þetta reddast is thrown easily out like a magic word and it’s believed in almost an equally magical sense.

In fact the usage of the worst “redda/st” (= to fix, to be saved) is not that old: the first time it’s seen in a dictionary is in the beginning of 1900’s. It’s quite likely that the word existed long before that, though. The origin of it is in Old Norse, however, according to Guðrún Kvaran the word “reddast” itself is a borrowed word from Danish and as such I feel it’s safe to say that it would have had to make itself useful enough before it was considered an Icelandic word and allowed to be printed in a dictionary.

Another, similar line is Þetta kemur. This is a saying that very quickly becomes familiar to a language student and translates directly as “it’ll come”, “it” meaning knowledge on how to use the language. Made a mistake? Made many? Failed an exam? Well, Icelandic is difficult. Þetta kemur.

In many ways both of these sayings are both reassuring and immensely annoying. When running on a tight schedule only to find out that some part of a project has just failed or broken beyond repair the last thing I want to hear is that things will correct themselves somehow. Because they won’t. I know already who’s really going to have to do the correcting, it’ll be me and I won’t be doing it happily! Hearing that dreaded phrase would otherwise send my blood pressure through the ceiling if it weren’t for the fact that it also makes me feel like my troubles have just been put into perspective. Maybe one project really is not as important as I think of it – maybe things can actually still be fixed – maybe if I’ll just sit down and calm down I’ll think of some way around my problem. After all, Icelanders are nothing if not good at making their way around obstacles that to the rest of the world seem impassable.

Everything tends to be, more or less, a matter of arrangements, talking to the people involved, explaining the situation and asking for more time… you’d be surprised at how many things can eventually be re-negotiated. There seems to be no such thing as a dead end. Lost your wallet/purse/laptop? Þetta reddast*. Made a gigantic fool out of yourself by saying accidentally something funny? Þetta kemur. Essay not ready even though the deadline is a mere hour away? Þetta reddast.

*If this happens just look around for a person holding it up and trying to find you or go to the nearest info point to ask about it. Iceland is a surprisingly safe place to carelessly leave things lying around.