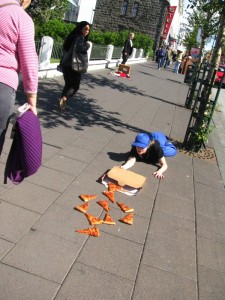 The most confusing part of Icelandic may not actually be the grammar – although difficult – nor the spelling – it will eventually make sense – but the way Icelanders pronounce it during everyday conversations. Depending on the speaker the language may be riddled with words borrowed from English, severely mumbled or shortened to unrecognizable form. Since the shortening is the most commonly occurring one* I decided to try to explain the typical forms of it.

Words are shortened both from the beginning and the end, depending on the situation. This makes speaking faster and easier too, since some sound combinations of Icelandic are challenging even for Icelanders themselves, for example when sound Ð (= eth) is followed by Þ (= thorn).
For example “Syndu þeim húsið þitt” (= Show them your house) is pronounced more like “Synduðeim húsiþitt”.

Two things happened in that sentence. First of all, if a Ð is the last letter of a word it regularly falls off in spoken tongue, especially so if it’s followed by a Þ. The sound combination is just too troublesome to pronounce as it is. Another one was that the letter Þ changed into a Ð: the pronoun that begins with it is unstressed and therefore gets the faster form of pronunciation.

Another letter that often falls off at the end of a word is G. This is because it’s often already unvoiced f.ex. in words such as “ég” or “og”, when spoken in a hurry the ends disappear completely. 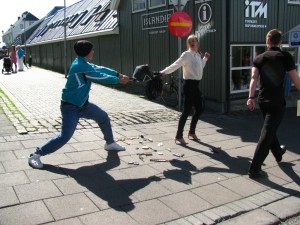 The letter that most commonly disappears from the beginning of a word is H. This is in particular true with unstressed pronouns: “Kom hann með þér?” (= Did he come with you?) turns into “Komann meþér?”. The Ð falls away as well, as per the rule. 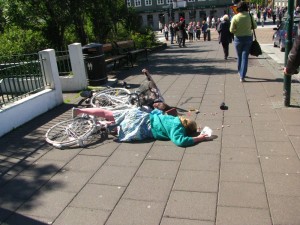 To make it a bit more challenging, when the H is left out it transforms the word into one that begins with a vowel – henni = “(h)enni”. Therefore the vowel-dropping is also necessary. “Sýndu henni að þér  er ekki sama” (= Show her that you care) becomes “Sýndenni aþér er ekki sama”.**

Sounds confusing, right? Just wait until you try to understand someone who has a habit of really brutal shortenings! In their use whole sentences turn into a few syllables which in turn may also be mumbled, in which case everything I wrote above is merely a guideline. I made a video to better explain this dropping business with sound examples:

As a homework assignment, how about listening to Gordjöss by Páll Óskar and following the lyrics while he sings? Can you spot which words are shortened, and why? 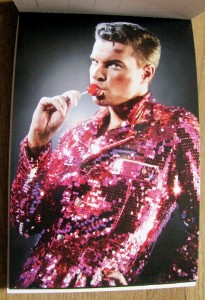 *The most common = everyone does it all the time, no joke.

Disclaimer: no Icelanders were harmed in the making of this blog entry but we couldn’t save the pizza.

**I’m really sorry, I made a mistake here. Þér -form of þú indeed uses er, not ert. Example: þér er boðið í afmæli (= You’re invited to a birthday party). Do also read the comment Heiða left after this post – she mentions the subjunctive mood form of the verb vera.