Dawn of the bolla. Posted by hulda on Feb 13, 2013 in Icelandic culture, Icelandic customs 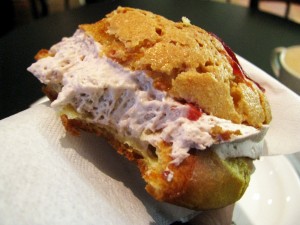 I will probably live, I think, fighting against the rising panic in the back of my throat. I sharpen my ears: the lady is trying to ask me something and it’s vital that I understand it now or I may not get another chance. I shout my answer to her, hoping to be heard above the screaming and to my relief she moves to the right direction, meaning that soon this will be over. I might even get my hearing back one day. And most importantly, I’m not the person who’s going to be stuck in here among the milling, hysterical crowd for the whole day. She is.

Starting from the 11th February the whole week has been one celebration after another. On the 11th is Bolludagur, the day dedicated for a filled choux-like bakery product called bolla. 12th is Sprengidagur (= explosion day), 13th Öskudagur (= ash day, or Ash Wednesday) and of course 14th is Valentínusardagur (= Valentine’s Day). 15th is another important day but alas not quite as fun, it’s the day you send in your tax paperwork.

Valentínusardagur probably doesn’t need much explaining since it’s the same holiday here as in almost any country that celebrates it. Sprengidagur is when people gorge themselves silly right before the Lent, I think the English name for this day might be Fat Tuesday. Typical foods for Sprengidagur are saltkjöt og baunir, salted meat and peasoup. 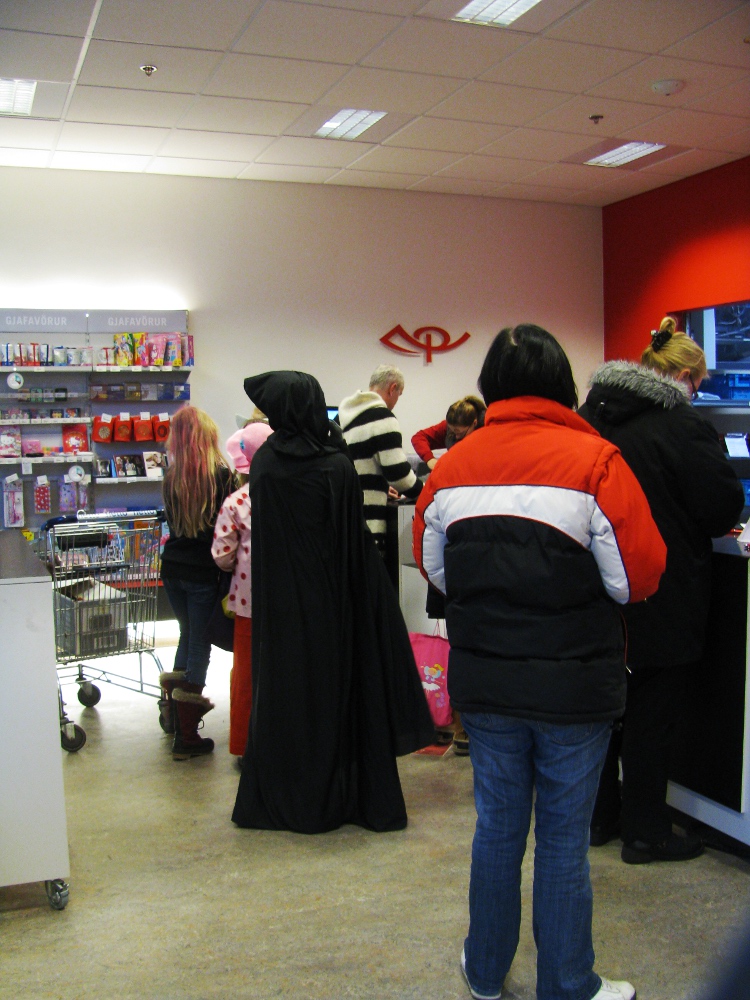 Something as mundane as a visit to the post office turned out to be rather interesting, with one possible Witch-king of Angmar in line and the staff members handing out candy from giant jars.*

Today, the 13th, is Öskudagur, which seems to be an Icelandic version of Halloween.* Children dress up in costumes and go from store to store singing or reciting poems for staff members and get given candy. I’m not certain whether they go from door to door, but I would vote against it since I haven’t really seen the kids do rounds anywhere but the shopping centers.

Bolludagur of the 11th then. Oh dear. It sounds innocent enough, just a day when you’re eating lots of delicious bolla, right? They come in many types, from choux to cardamom bread, filled with whipped cream of many flavors, jam, chocolate, candies, caramel sauce, fresh fruit and berries etc. The part of the day when you eat the bolla certainly is pleasant, yet buying them is everything but! 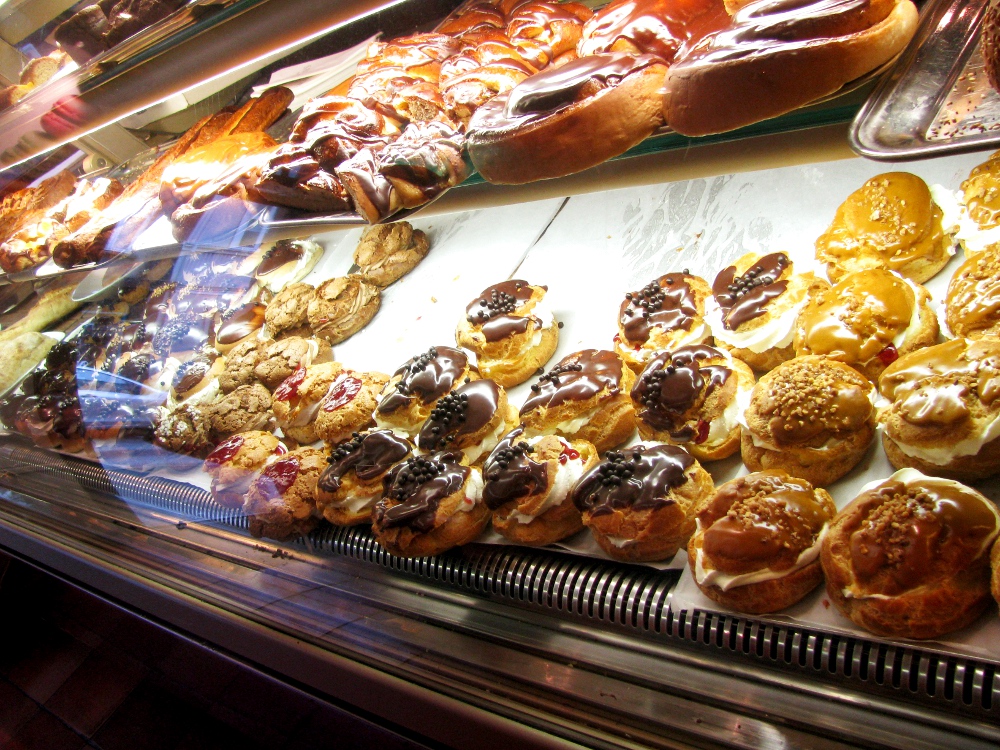 This picture is from Sandholt Bakery on Laugarvegur downtown. It’s a cozy place with great coffee and pastries, definitely worth a visit! The day I took this picture was Sunday so although they were already selling bollur the customers had not whipped themselves into a proper frenzy yet.

The small local bakery was absolutely swamped with people when I got there. I took a queuing number and waited for my turn, getting pushed and shoved around a fair bit just by standing in line. People were fighting to both get to the front (despite the queuing system) and to get their voice heard above others, as everyone was shouting their orders at the same time, complaining about their purchase or, in the case of their children, just venting their frustration and stress in as shrill a manner as possible. I almost missed my turn because the lady behind the counter could not hear me reply to my number.

Next I was trying desperately to explain which bolla I wanted. Sounds simple but try to do that with customer on the right digging her elbow into your ribs and customer on the left launching into a loud, angry tirade over vanilla cream that did not taste enough of vanilla. I chose to employ the key words -technique that was taught to us in the first year: when trying to understand spoken Icelandic, forget about listening to the case endings etc. and just concentrate on picking out the most important words of a sentence. They’ll usually be enough for you to understand what is being said. I found that the same method works the other way as well:

I then repeated this order a couple of times with variants such as SÚKKULAÐIBOLLA MINUS RJÓMI and JARÐARBERJABOLLA MEÐ RJÓMA as we both strove to get my order correct. The customer on the left was replaced by another one who had already ordered and eaten her bolla but wanted to file a complaint about the prices. The one on my right side finally got her turn and began to point around so energetically I feared for my eyes. Somehow I managed to pull through, although I did almost pay to a wrong person (the service folk flitted back and forth the whole time, weaving among each other holding large boxes and trays of bolla, quite an impressive sight) and made a decision to blog about my experience right there and then.

I left the bakery to find my boyfriend waiting for me outside, at a safe distance from the door. The natural survival skills of that man never cease to amaze me – in case of a zombie apocalypse I know for sure who to side with! 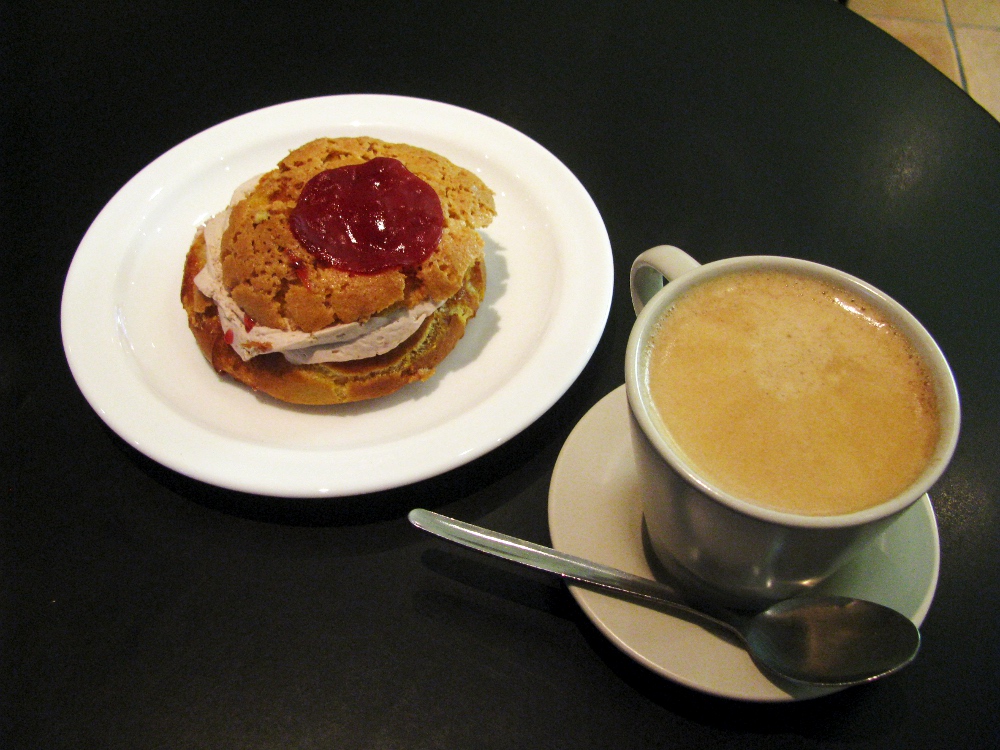 One type of Sandholt’s bolla: a bun with burned sugar crust, whipped cream with berries, raspberry (?) jam. The bollur are worth the madness.

*If the Witch-king of Angmar wants sweets it’s probably best to comply.

**Halloween itself is treated more like a fancy dress drinking party in Iceland.