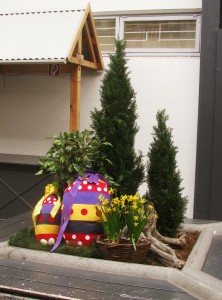 It’s not a bad deal at all to be in Iceland during the Easter, especially if judged by the chocolate eggs! Ranging from huge to gigantic to ridiculous in size and done in many flavours (my boyfriend’s egg is dark chocolate, mine’s milk chocolate with bits of licorice in it), they have been dominating most grocery stores for several weeks now. For the past week they’ve also included staff handing out large pieces of chocolate for free. I tend to be a little bit absentminded while shopping so when someone greets me and I turn around to face a shovel full of chocolate the response center in my brain freezes completely. Somehow I’ll always end up with my hands full of chocolate – not that I’m complaining, the chocolate is delicious but it’s doing horrible things to my waist!

The eggs are filled with candy and always include everyone’s favourite, a small piece of paper with a proverb in it. The procedure goes as follows: first you’ll have to find the egg which has been hidden somewhere about the house. After bragging how easy it was to find you smash it to pieces and fish around for the proverb. If you’re lucky you’ll understand it, if not it goes from hand to hand and people (Icelandic people, mind you) scratch their heads trying to make some sense out of it. Of course, the unluckiest result in my personal opinion is a joke proverb such as “Ég er búinn að gleyma hvað átti að standa á mér” (= I’ve forgotten what should read here) or “Plís. Ekki borða mig!” (= Please. Don’t eat me!).

If this sounds like making an elephant out of a fly I can tell you I’m no ways alone with these thoughts. Even as we speak my Facebook wall is full of people complaining about their proverbs. Some get the joke ones, some cannot understand theirs and some just plain don’t like the proverb that they received. I just witnessed someone comment on the no-proverb proverbs: “Ég vil ekki búa á þessari plánetu lengur!” (= I don’t want to live on this planet anymore!) 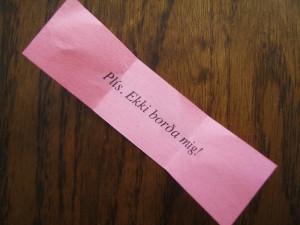 Chocolate egg proverbs, serious business! You can sometimes hear people calling to radio shows to either complain about them, or just ask what on earth does the one they received mean. It may sound unusual that Icelanders would have trouble understanding Icelandic, but bear in mind that these proverbs can come from any written text since Icelanders first began to write, which would be the very moment the first settlers got off their longboats. Despite the claims of Icelandic being almost the same as Old Norse, fact is that the language has changed a lot since those times, both by vocabulary, grammar and the culture they appeared in.

Taken out of context and lacking the necessary explanations these snippets can be almost nonsensical even on the off-chance that the reader understand every word as they were once meant to be. Here’s a good example:

“Allt kann sá er hófið kann.” (= The one who knows moderation can do anything.) 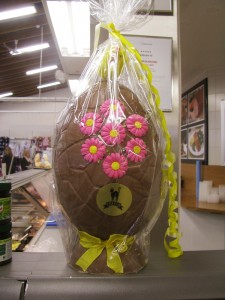 There’s one thing that the virtue of moderation will probably never touch: the size of these eggs! Look at the two jars on the left side of it to get a better idea of just how monstrous this one is.

This proverb is from Gísla saga Súrssonar / The Saga of Gisli the Outlaw which dates to 13th century. In the medieval times the virtue of moderation, temperance, was viewed as the most important thing you could possess in order to live a happy life. Hávamál, a collection of Óðinn’s wisdom, is wrought around the idea. A person with full control of themselves is a successful human, and full control means moderation in eating and drinking, talking, aggressive behaviour (Hávamál stresses that one should always talk to one’s enemies in a friendly and polite manner), hesitation (while it’s wise to think through every action decisions need to be made in a timely manner) and worrying. Yes, worrying. Indulging in too much of it would only spiral out of control, Hávamál says.

Therefore the one who knows the virtue of moderation and exercises it regularly is a person who can accomplish anything they want to.

There are also proverbs that are understandable, yet difficult to translate such as:

“Margur gjörir verr en hann veit.” (= Many cause worse things to happen than they know of.)

I received a wonderful explanation for this one though. Think of a situation online where someone blurts out something much worse than they intended to. Maybe they’re ignorant on the matter, maybe they are trying to crack a joke, maybe they just select their words wrong. Yet they end up hurting someone deeply, and when this is explained to them their reaction is defensive and they might even outright refuse to apologize. This is the proverb in action: causing something happen that’s much worse than expected is not a rare occurrence. 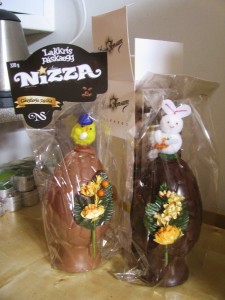 This year’s haul, mine on the left.

The third level of difficulty is the hardest, of course. There are proverbs that seem to make absolutely no sense what so ever. For example:

I can only say I have tried my best with this one. I’ve checked each word, I’ve asked two Icelanders their opinion on it (neither could understand it) and I’ve asked about it on Facebook, no replies. I Googled it as well but received only two results. One of them is just someone stating that this is the proverb they got, another one wants to know what it means.

One possibility is that there’s a typo in the text. It could also be from an old text, or a snippet taken completely out of context. Perhaps the first “lifa” (= to live) should have been “leyfa” (= to permit, to allow) instead? However, the most likely translation for this one would be:

“If you want to live for yourself only you’ll have to let others do the same.”

In other words, if you want to be selfish then go ahead, but don’t expect anyone to do you any favours either.

I made a short video using the proverbs I’ve received this year. I thought it could work well as an example on the differences in pronunciation. Sorry if I sound a bit awkward here, all my concentration was on getting the important sounds as correct as possible. 😀

Be it this way or that, once the proverb problem is out of the way there’s still something to do, the egg and the candy inside need to be eaten! Excuse me please, my responsibilities are calling and oh my, what a delicious responsibility it is.