The wonderful accident called Blue Lagoon. Posted by hulda on May 27, 2013 in Icelandic customs, Icelandic history 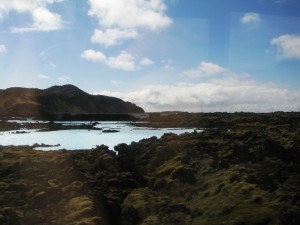 Sitting in the middle of an empty desert of lava and moss somewhere between Keflavík and Reykjavík is one of the most interesting sights to see in Iceland. You take a turn off the main road and then another one, and all of a sudden you see a thick column of white smoke rising up from the ground. You have found Bláa Lónið, the Blue Lagoon.

The thing that most people wonder is why on earth would someone think of building a geothermal spa there so far away from everything. Number one reason is of course that subsoil hot water is located there, just below the lava field. The reason number two is that no one actually ever thought of building a spa there at all: the birth of the Bláa Lónið was a series of mistakes, accidents and people ignoring warning signs.

Bláa Lónið has a reputation of being a little bit “touristy” and no wonder, since it’s a very popular place to visit. It’s not the only such geothermal spa on Iceland but what makes it especially tourist friendly is its location near the airport. The prices are naturally higher than elsewhere in Iceland: a ticket costs presently 5000kr but will rise even higher for the busiest season, June, July and August. On the plus side it also has long opening hours and that ticket will allow you to stay for as long as you like. Here on their web page you’ll find more information on the prices and opening hours. 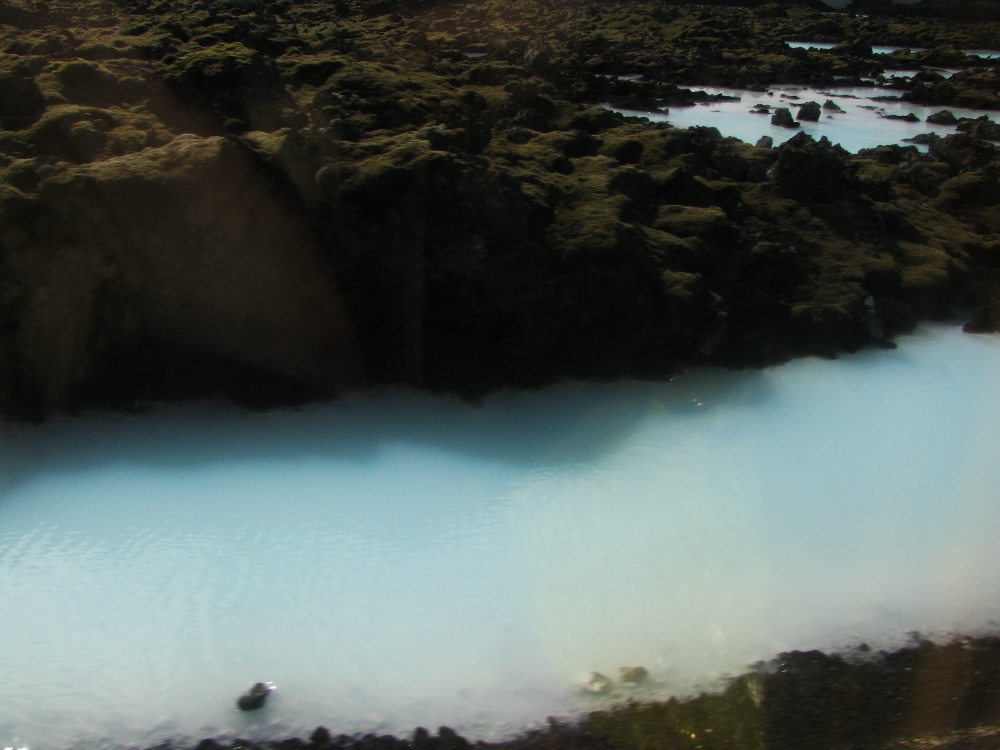 Depending on the weather you may or may not actually arrive in a blue lagoon. The water itself is in reality opaque and milky white, but it reflects the sky above, so on a bright cloudless day you’ll really see the reason behind the name. Rainy days aren’t that bad either though, the water is lovely and warm no matter its colour. 🙂 The reason for the milkiness is that it’s mixed with silica mud, sea salt and algae.

There’s a hot water plant right next to the spa that is pumping it up from the ground – the water’s actually first used to both create electricity and to heat up non-muddy water, but after it cools down it’s directed to the Blue Lagoon. The water is constantly changing (it changes entirely every 48h) and therefore always clean even though there’s no chloride in the water (bacteria cannot survive in it). One warning though: while the mixture of algae, salt and silica mud is known to be very healthy for the skin it’s not so good for the hair, so it’s a good idea to tie it above your head or to wear a swimming cap. 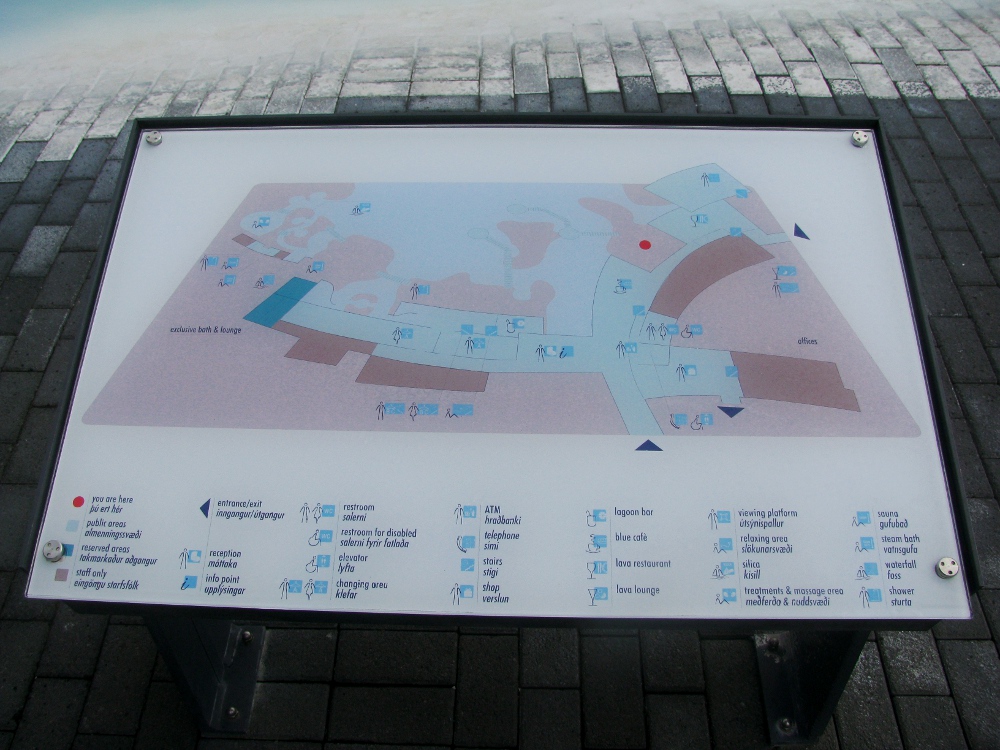 Here’s a map of the area. The red dot is a terrace to a small, cosy cafe, all the beige areas are outside of the buildings and all the pale blue that doesn’t have lines drawn around it is water. The main entrance is the arrow on the bottom, and from there you’ll first pay your ticket at the cashier and then enter the shower and locker areas to the left.

Your key is a blue plastic wrist band. Put your stuff in the locker of your choice, close the door and show your bracelet in front of the nearest reader. Your locker number will light up on the screen and from there on only your bracelet can open it.

The bracelet is also used for buying stuff once you’re inside the pool area. There’s a small bar that serves drinks and shaved ice right in the middle of the main pool to name one example and whatever you buy will be added to your bracelet. It will be scanned when you’re leaving and that’s when you pay for everything you’ve bought so far. By the way, I recommend that you don’t drink too much alcohol in the baths. You’ll quickly feel dizzy and nauseous because the warmth of the baths makes you dehydrated faster than usual, a better idea might be the shaved ice/slushie called krap/krap ís in Icelandic. 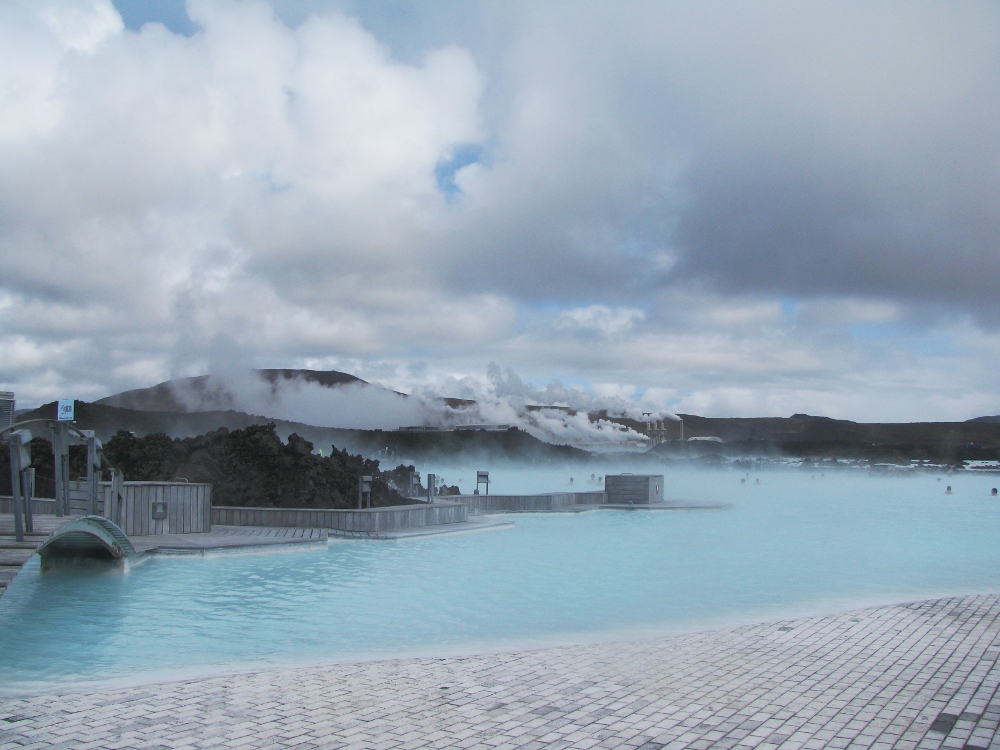 The shower area operates like any swimming pool in Iceland. You strip naked (no swim suits in showers, there are members of the staff walking around and they’ll be quick to correct you if they catch you wearing one) and wash yourself well. Since Bláa Lónið is very aware of the amount of tourists visiting it they have installed doors for the shower cubicles, so it’s actually an easier option to public bathing in Iceland for those who are not as relaxed about public nudity as the Icelanders are.

But going back a little bit – how did this amazing little spa begin?

First step of course was the nearby Keflavík. 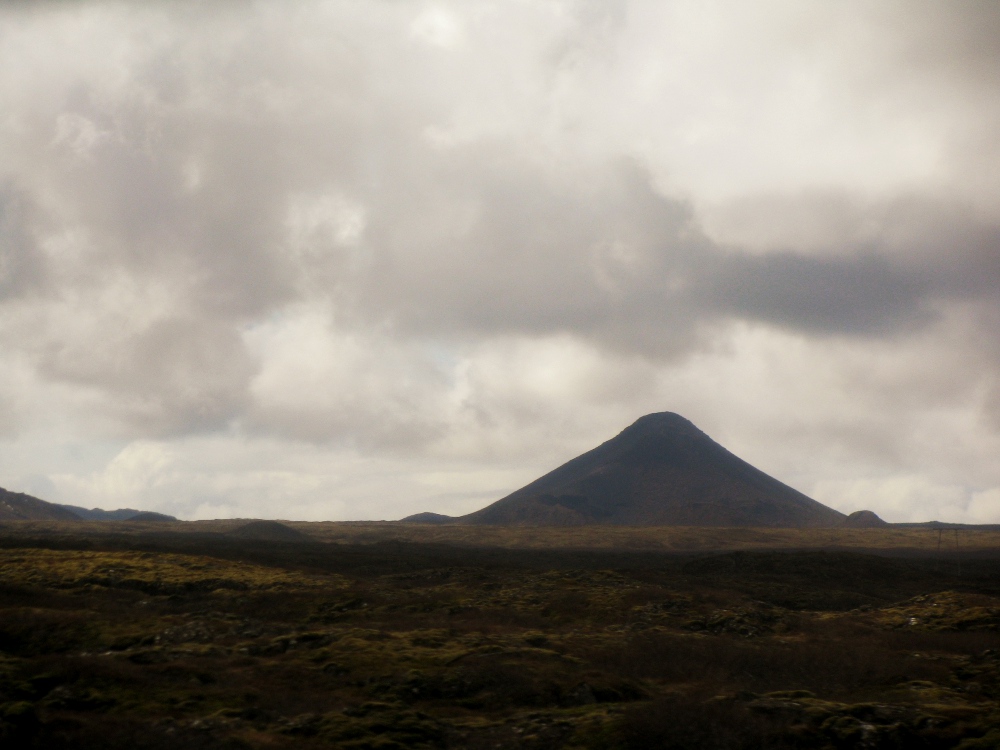 When Iceland was taken over during the WW2 the British troops were the first ones to arrive, and roughly one year later the Americans followed. This caused a problem with how and where these troops would be situated. There was simply no space for the Americans in Reykjavík because the amount of soldiers arriving was much larger, so instead of setting camp there they requested a spot nearby the capital city where they could build their own airport. Icelanders thought this for a moment and settled for giving them Keflavík, the most inhospitable, uninhabitable place there was. The Americans seem to have shrugged, rolled their sleeves and got to work. As a result there was suddenly lots of people living in the Keflavík area, both American soldiers and the Icelanders that were working for them, and with a little bit of time the Icelanders settled there, creating many small towns.

Let some time pass now, from the WW2 era to the 60’s-70’s. That was when the locals found out that there was a large source of hot water under the lava field and quickly built a geothermal power plant above it. They pumped up the scalding hot water, ran it through turbines to create electricity and then fed it through a heat exchanger that to this day provides warm water for the cities all around. Then they began to wonder what to do with the muddy, cooled water, and this is when things started to go wrong.

Well, the lava field was one big stone sieve was is not, they thought. The rocks are full of holes and that’s why rainwater never stays on it but sinks immediately through the ground. Why not just pump the water out on the field and let it trickle down to its original source? It sounds like a logical idea but there was a critical flaw in the plan. 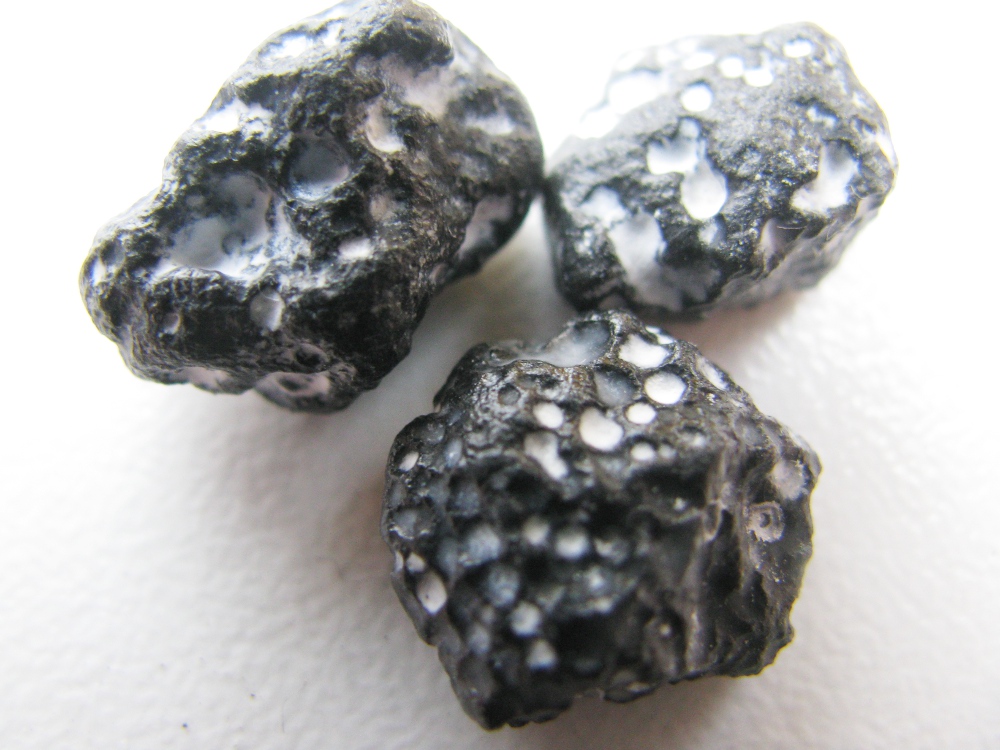 I got these three lava pebbles up from the pool just for a photo; this is what silica mud does to lava rock. It fills up all the holes and turns into an unbreakable, water-proof plug.* This meant that very soon the electric plant had huge pools of eerie looking water sitting right next to it, going absolutely nowhere. People did not like the look of it and thought it might even be poisonous, so the factory fenced off the entire area and forbade anyone from entering…

…except  that it never goes well to forbid Icelanders something. If anything, that’s a way of making sure that someone goes there to do exactly what’s not allowed. It were the factory workers who began to sneak into the pools despite the ban to soak there for fun.

One of them had psoriasis. After some time of bathing in the muddy pools outside of his work place his condition began to improve at a speed so alarming that it made his doctor curious, and once he heard the reason he began a research on the water. He found out that it was not only non-toxic, it also had massive health benefits for people suffering of many kinds of skin ailments!

The pools were built and the area opened for bathing, and the rest is history**. 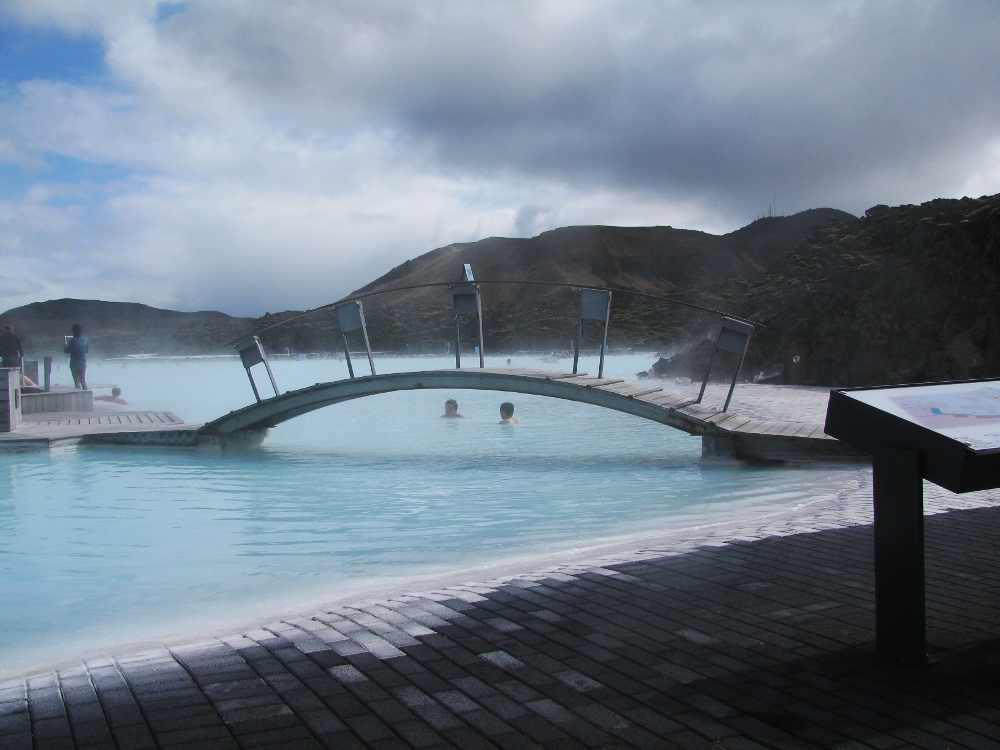 * All Icelandic water has some of it in it by the way. It looks a lot like calcium but it’s not, for example it cannot be cleaned off the appliances, ever. Don’t even bother with the vinegar because that coffee maker is already a goner.

**Here’s a Morgunblaðið news article from the year 1984 on Bláa Lónið.

Here’s some vocabulary for visiting the place. 😉