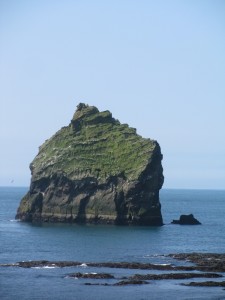 After a whole month of bad weather the summer finally arrived to Iceland. We made some quick plans – quick because they had been made before and always abandoned because of the continuous rain – packed our tent and other camping items into the jeep and headed out. We decided to stay close to Reykjavík this time, so keep in mind that all the photos in these traveling entries are so close that if you travel to Iceland and rent a car they’re all within your reach – all of the locations are at worst two hour’s drive from the capital city or even closer.

Our route took us around Reykjanes (which could be translated as Smoky Point), then down along the south coast, turning north towards Flúðir (= Rapids). From there we went a little way up north, turned to west again and returned via the Golden Circle, picking up a hitchhiker at Þingvellir. Hi J. from Germany if you’re reading this, I hope you’ve had a great time traveling in Iceland!

And now to the photos: 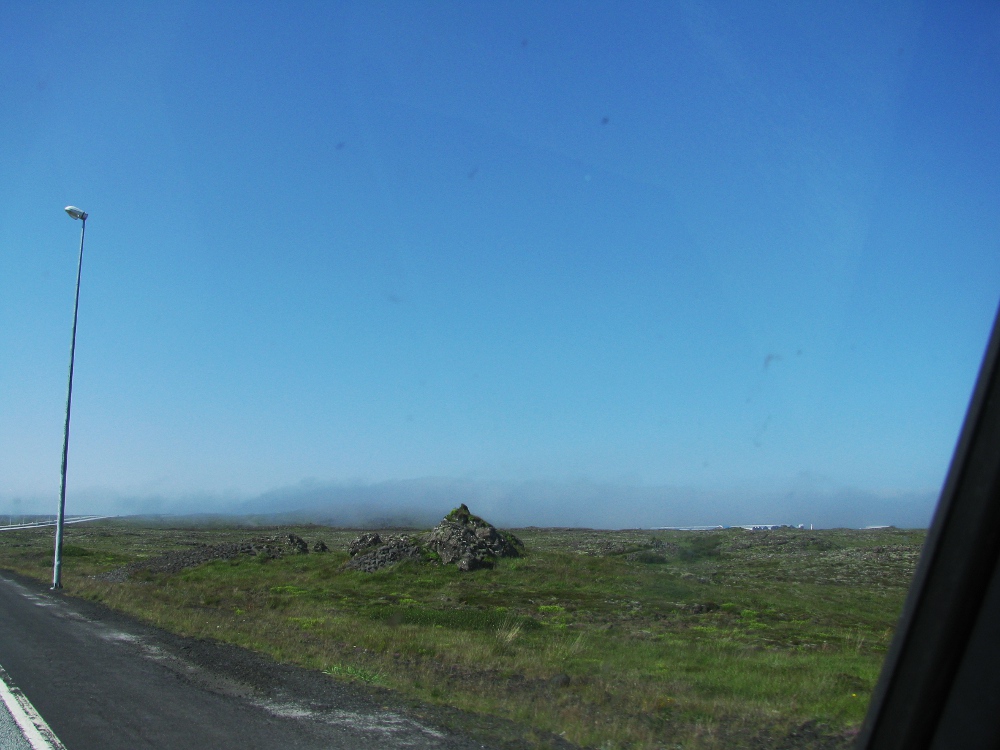 The morning was sunny and bright – and foggy by the sea as we drove to the west in the direction of Keflavík airport. The haze in this photo is fog seen from the outside of it. 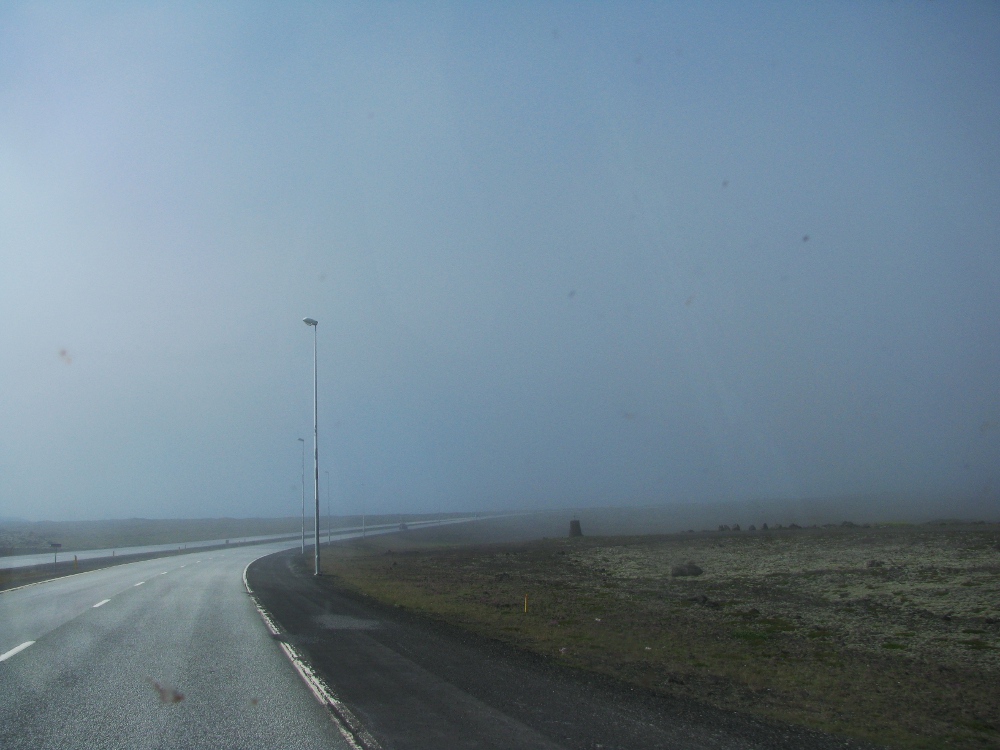 Here’s what driving right into it looked like. Poor visibility, but luckily the fog was very localized and we drove through the clouds in a matter of minutes. 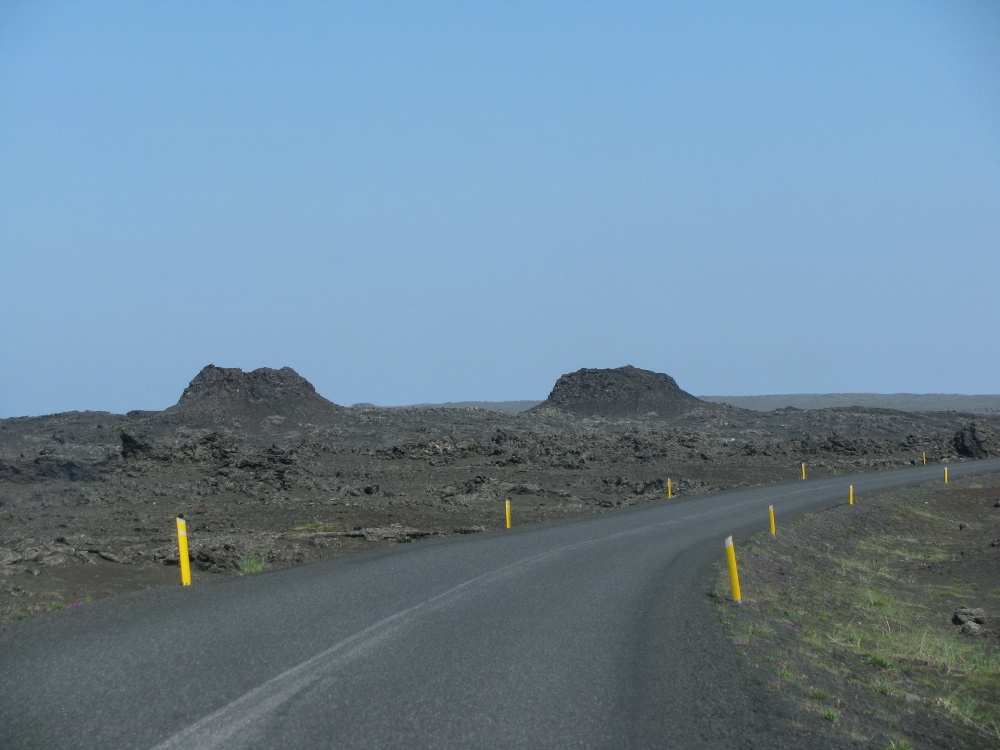 Iceland is often used as a location for filming movies due to its wide selection of different kinds of terrain. Apparently they shot the Thor 2 movie in Iceland last year, the local magazines talked of little else. Icelanders have an interesting view on the movies that deal with their old gods: on one hand they seem to really enjoy the movies, on the other they also enjoy pointing out everything that’s done wrong in them. Þór is not supposed to be blonde but red haired, Loki is Óðinn’s blood brother, not adopted son, and his last name is a matronymic, not patronymic (Laufey is a woman’s name). One thing everyone seems to agree with though is that Tom Hiddleston was a perfect choice for Loki. 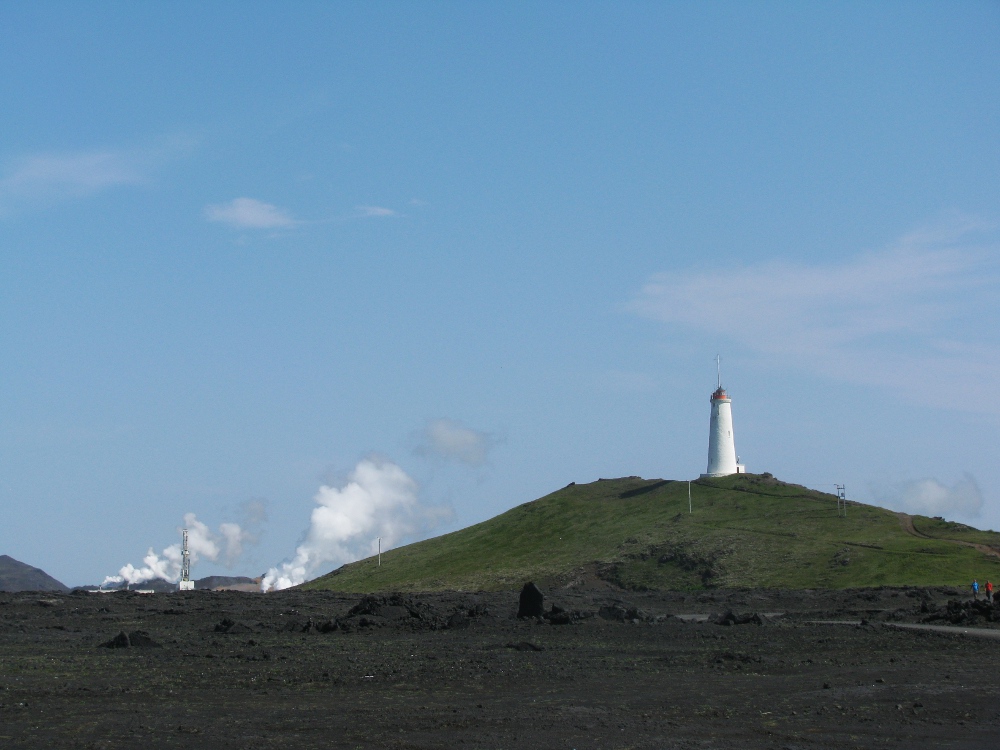 Here is our first planned stop, the Reykjanes lighthouse at Valahnúkur cliffs. It’s often called Icelanders’ favourite lighthouse and no wonder, it’s absolutely beautiful. Behind it you can see an electric/hot water plant and following the steam clouds and one road sign you can also visit the Gunnuhver, Gunna’s hot spring, the (possibly haunted) source of all that hot water! 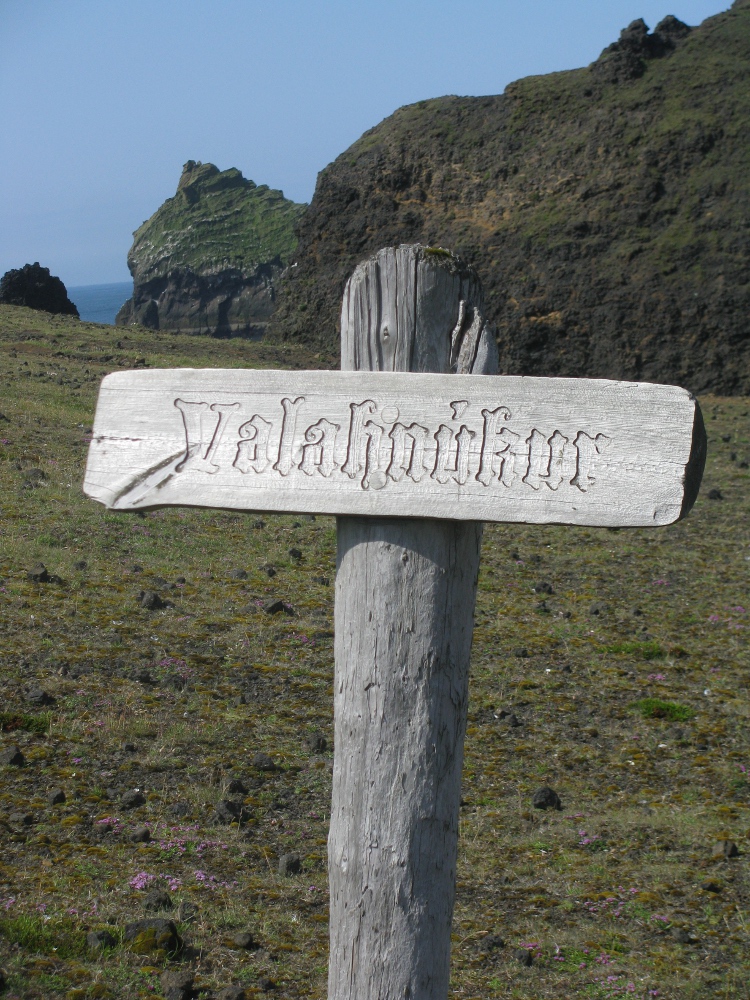 But let’s not get too much ahead in the story. This area hosts a large seabird colony, notable for many reasons but perhaps most importantly – 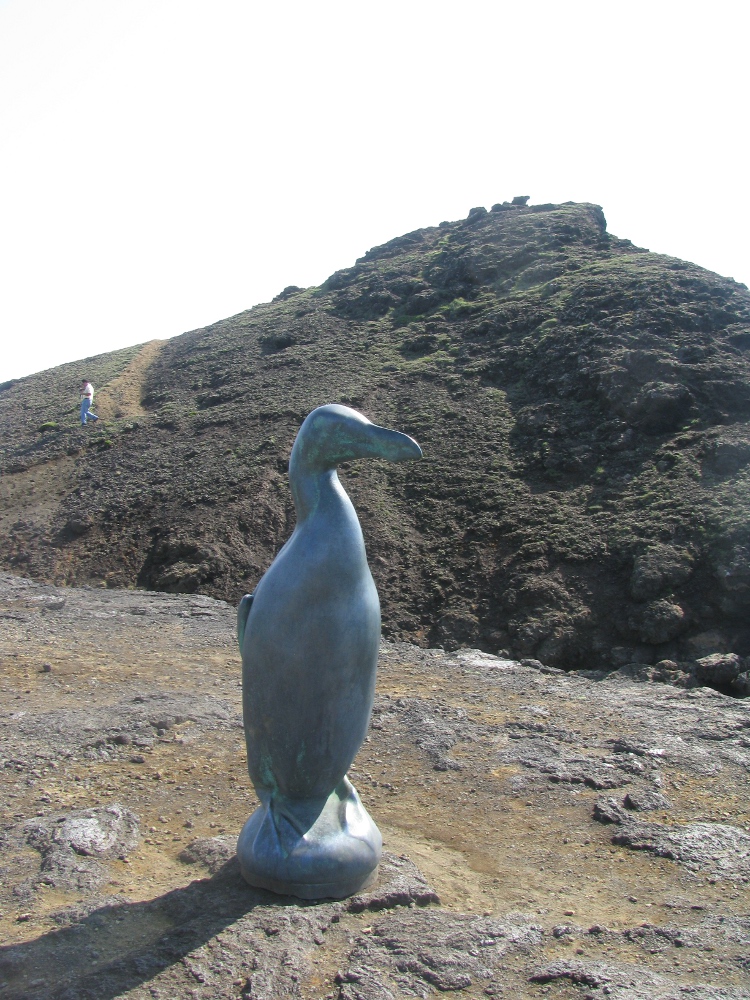 – as the place where the last two geirfugl (= Great Auks) were killed.  The story is quite a sad one: the bird was very agile in water but clumsy on land and was therefore an easy catch. Relentless hunting shrank the population dramatically, and when it became clear that the species was going extinct efforts were made to stop the hunting. Alas, this caused exactly the opposite kind of a reaction than the one that was hoped for. Upon realizing that the Great Auk was going to die out as a species museums and private collectors began to pay high prices for Great Auks, which resulted in the whole population being killed off even faster. The last couple were killed near the Valahnúkur cliffs on an island called Eldey, Fire Island. 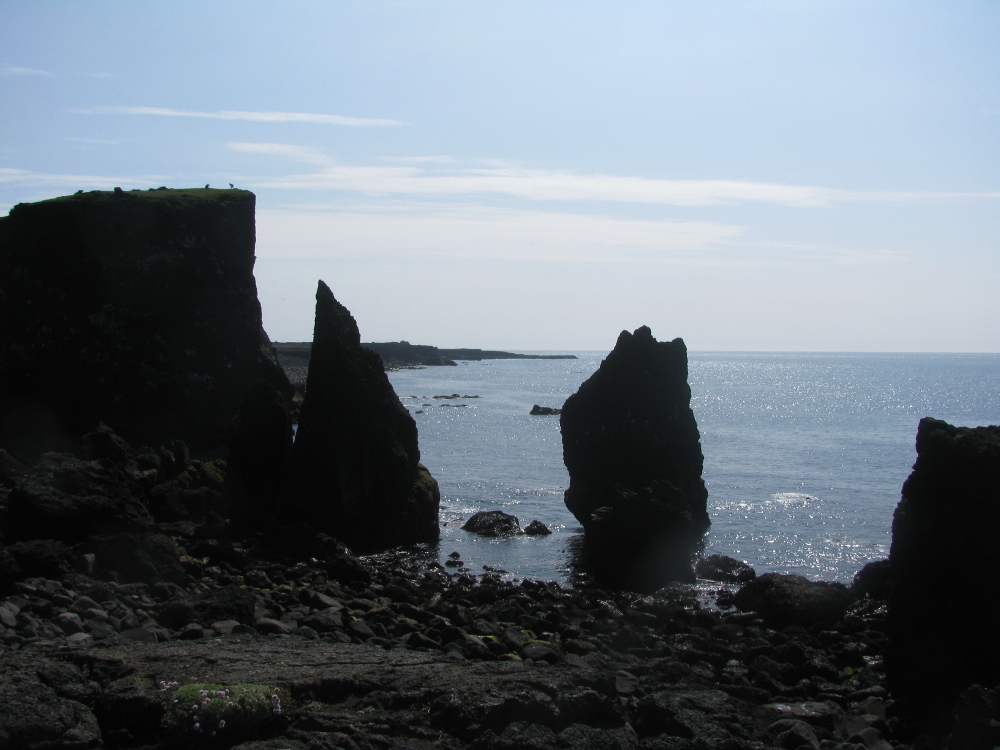 Even so life goes on, and at this time of the year when the chicks have hatched it’s a very noisy life!

By the way, see those small dots on top of that cliff? They’re humans. That gives a good size reference of exactly how tall the cliffs are. 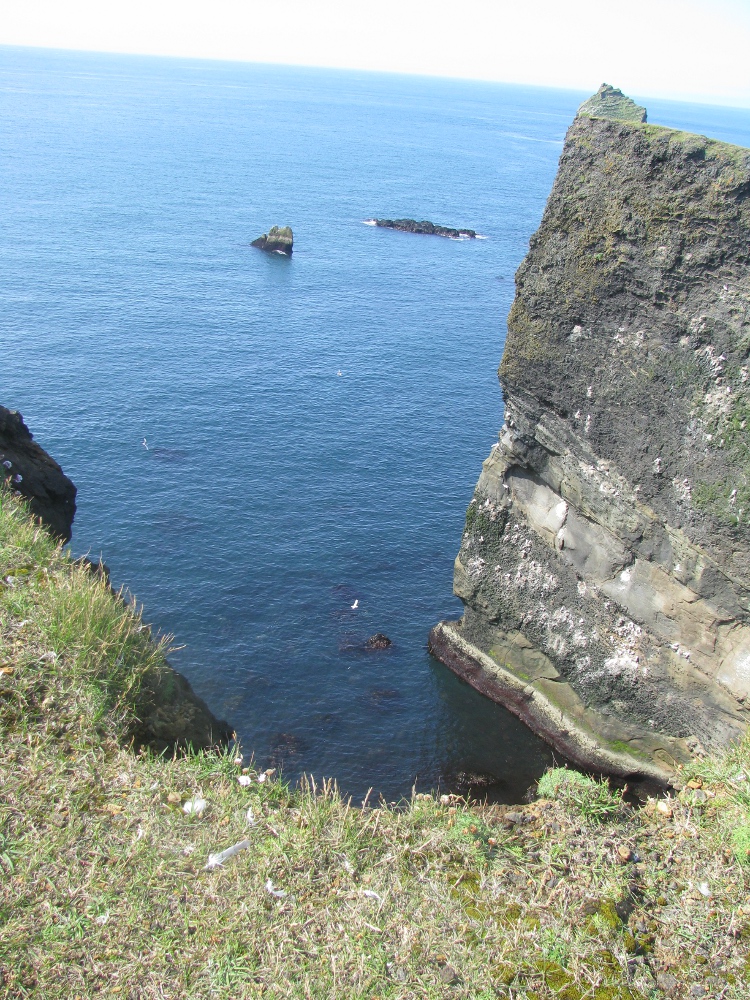 It’s a long way down. Not for anyone who cannot stand heights.

Another word of warning for those who’d like to visit bird cliffs in Iceland. Many of them, like Vanahnúkur, are tall and have a grass covered top. Up here the wind can be surprising and most importantly the edge of the cliff will not support a human’s weight. There may not even be rock underneath because in places the grass grows over the cliff so always be careful, people have fallen from these cliffs before by misjudging the strength of either the cliff edge or the wind. 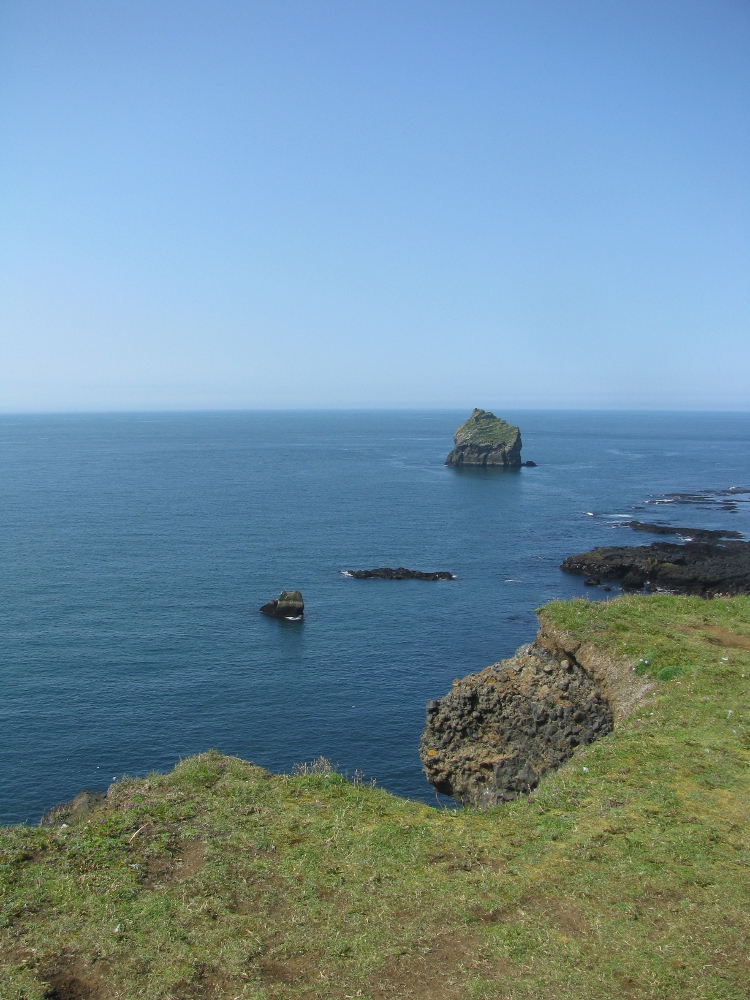 A nice view to the rock formations from the top. The largest one is called Karlinn, The Old Man. He used to stand there side by side with his wife Kerling, The Old Woman, but alas she has by now crumbled away. 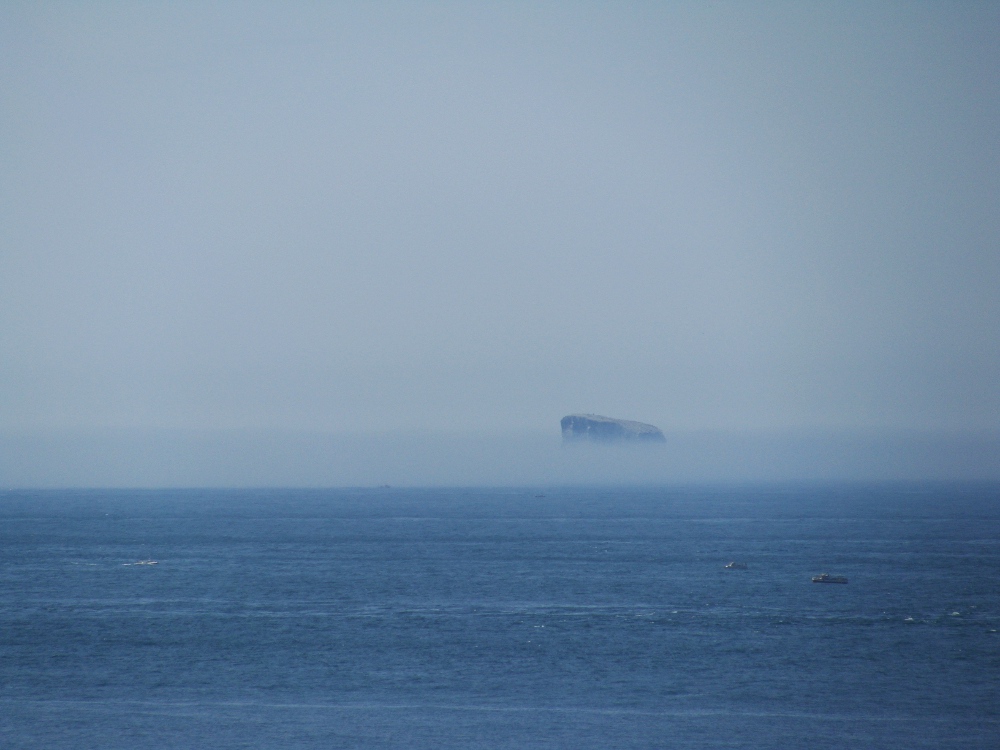 Here’s Eldey rising out of the sea mist. It’s said to be a small island but you can use those two ships in the front of the photo for another size comparison… 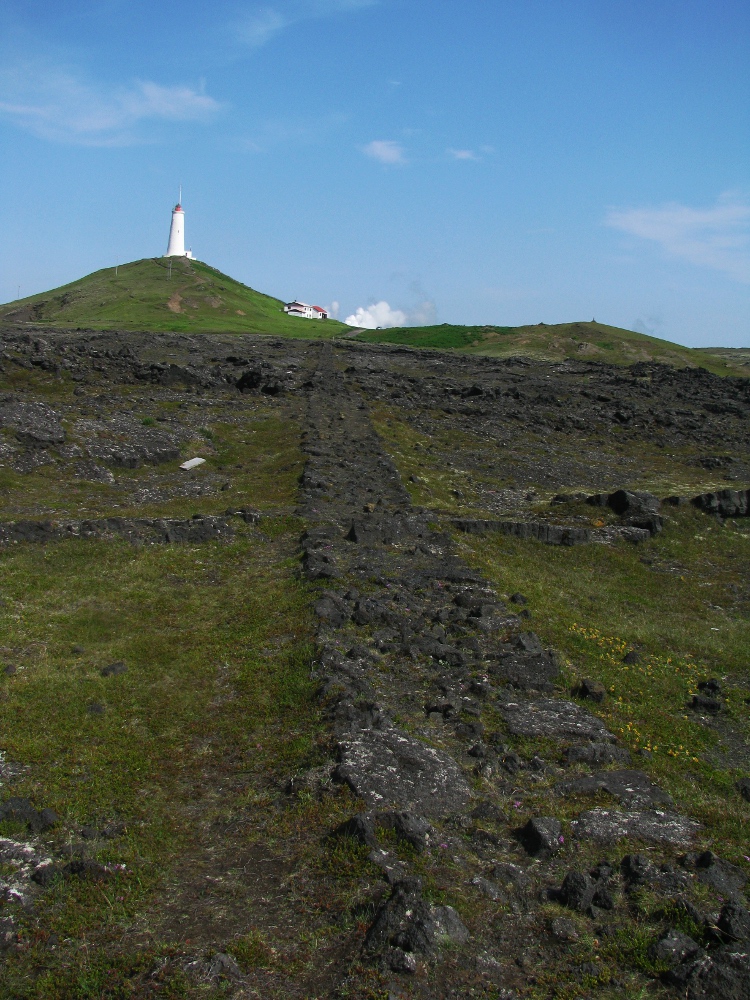 Here’s something that I noticed from on top of the cliff: someone had once upon a time built a road of lava rock. Now it’s too weather worn to be of much use, but who knows, maybe it once was the easiest way over the lava field from the light house… 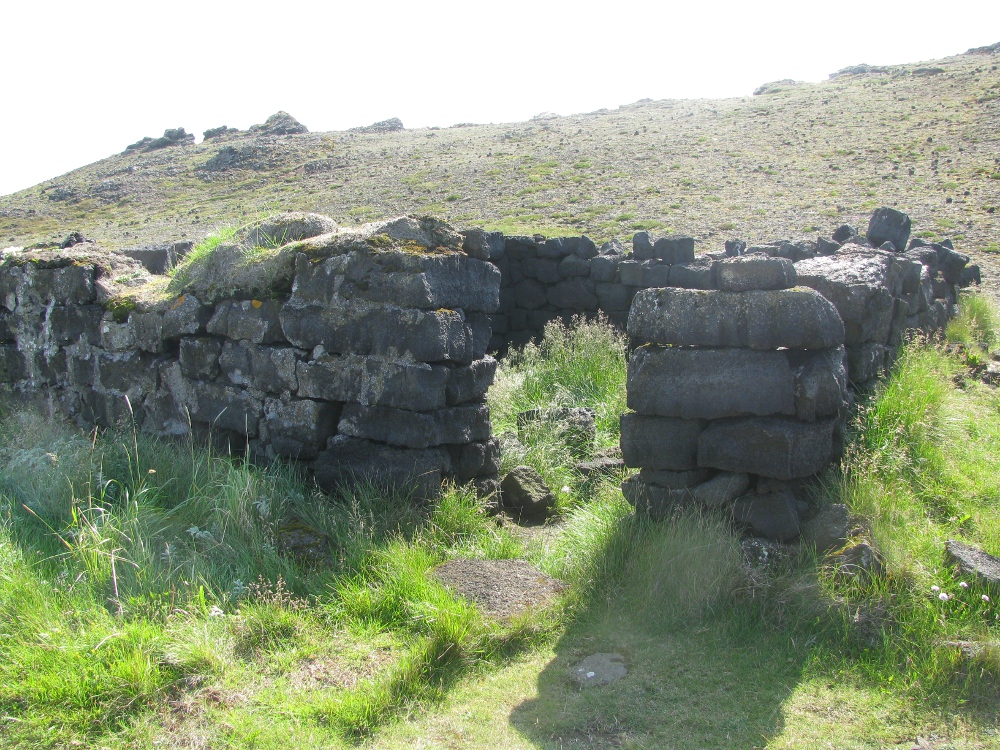 …to here where it ends, the ruins of an old house (likely a turf house). There’s another ruin up on the cliff, that’s all grown over.

As you can see the base has been made of a certain material that Iceland has a lot of, lava rock. It’s still widely in use for both building and decorative purposes, and why not, it’s both beautiful and easily available. The University of Iceland has a staircase built out of it so it probably doesn’t wear down fast either. 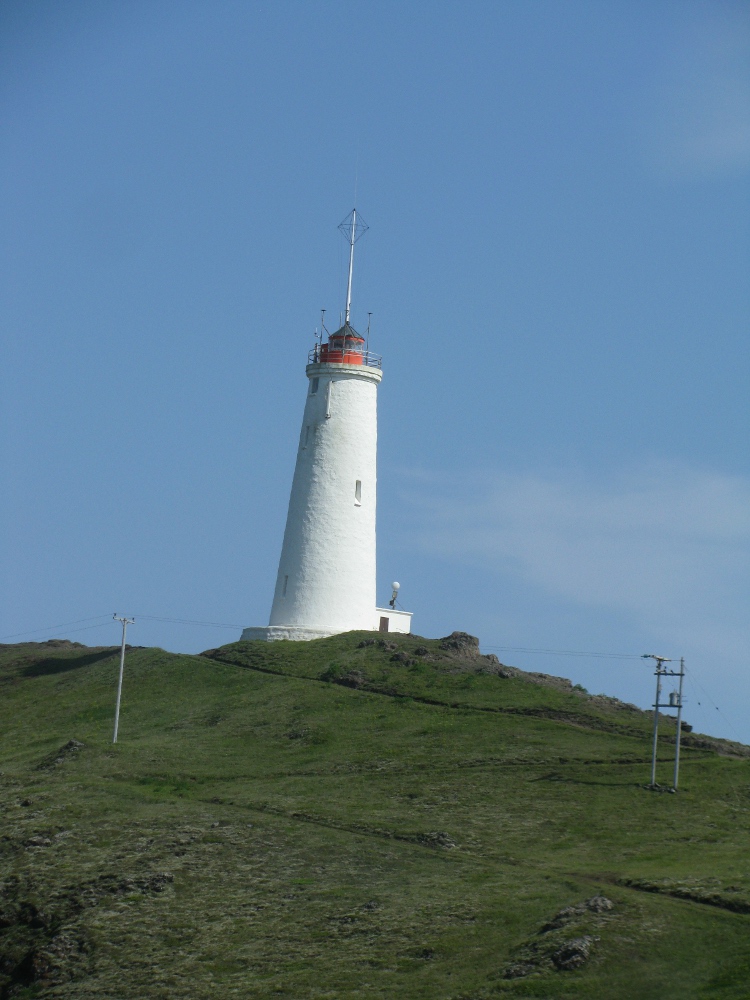 A better look at the lighthouse. Don’t worry, it’s not really leaning to a side, we just happened to drive into a pothole right when I was taking this photo. 😀

Many times I thanked whatever higher powers be that we had a jeep. Icelandic roads can be in awful condition, especially the unpaved ones. This becomes problematic if you want to see sights such as this one that are not right next to the main roads, because almost all roads that turn away from it are unpaved and more or less untended to; Valahnúkur thankfully is located relatively close to the main road, but Hvítserkur in the north Iceland has a long stretch of horribly bumpy dirt road leading up to it. The last stretch is a steep downhill with potholes the size of small craters, not worth trying unless you’re on a 4×4.

Here’s some related vocabulary; English translations of the words are available as subtitles if you’d like to have them. Many Icelandic places (personally I would make a humble estimation of a grand majority) are named after whatever is nearest to them.  Just open a map of Iceland and start counting how many places that end with –sandur  or –hraun you can find, or –á, –hagi, –tún… they all tell you what you can expect the nature around them to be like. Any sandur or hraun is most likely a wasteland covered in either sand of lava rock, –á hints that there must be a river in the area and so on. Reading a map and translating the names is also a great way of building your vocabulary!

In the next posts we’re going to look at some supernatural creatures and also see how the wealthiest people used to live here in Iceland, which is an interesting comparison to what used to be the norm in the turf houses. See you soon!