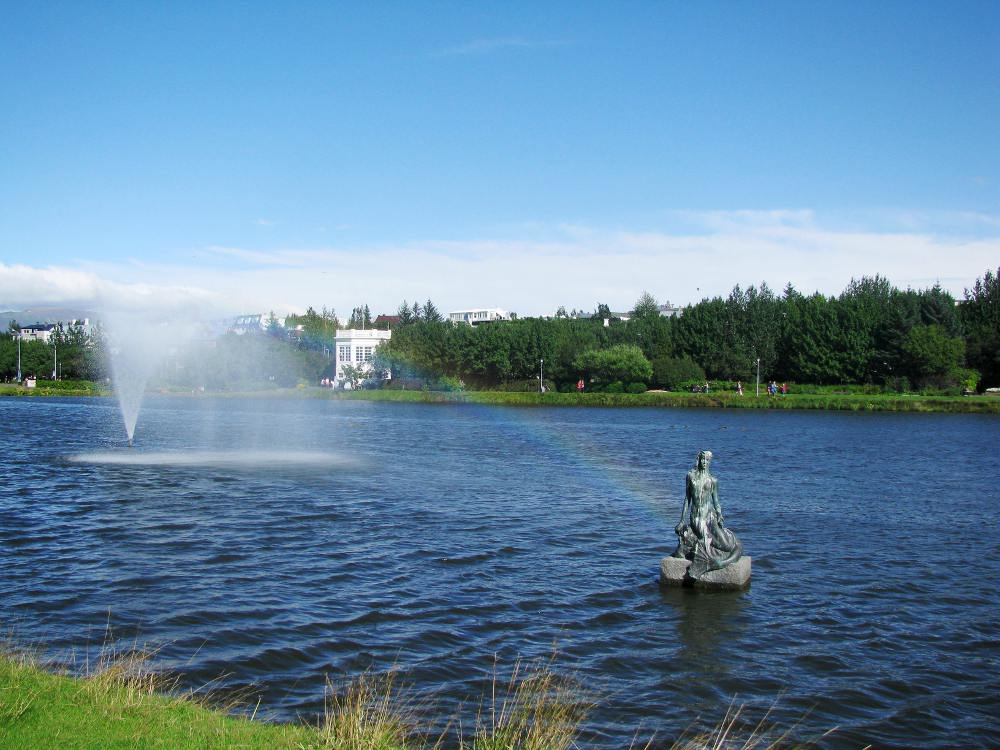 Hulda reporting in from the annual Hinsegin dagar, Pride Week, and especially the parade! For once we had amazing weather luck and apparently one quarter of Icelanders showed up to celebrate the day. I can admit I’ve personally never seen this many Icelanders in one place together before in all the years I’ve lived here, although the parade is always a huge party and widely attended. To the pictures – and some related vocabulary. 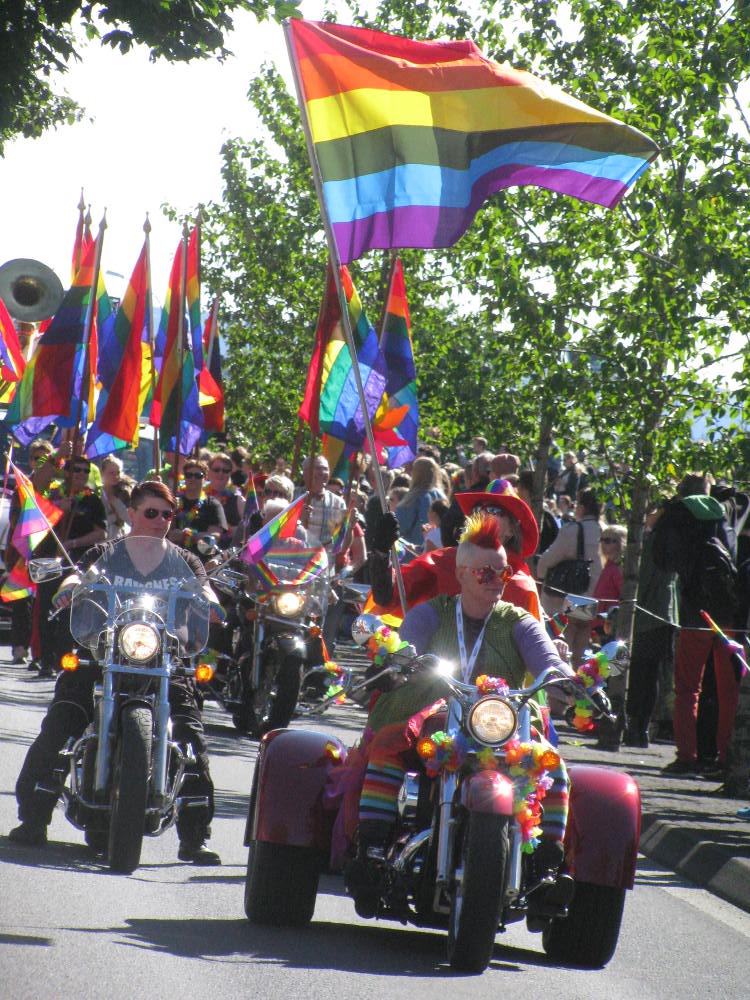 Traditions of the parade dictate that it’s always headed by the local Dykes on Bikes.

Hinsegin = otherwise, different. When used for people it translates close to “those people”, something you would say when you want to exclude a group or define that the people in it are somehow (negatively) not like everyone else. I’m not entirely certain but I’m ready to wager that the term is derogatory at its origin but has since been reclaimed by the people it was used to target against.

Yet this is Iceland and Icelandic attitudes are nowadays quite relaxed on the matter. Hinsegin dagar is a week meant for celebrating differences, no matter the gender, sexuality, ethnicity or for example dress preferences, as the official statement goes (link). 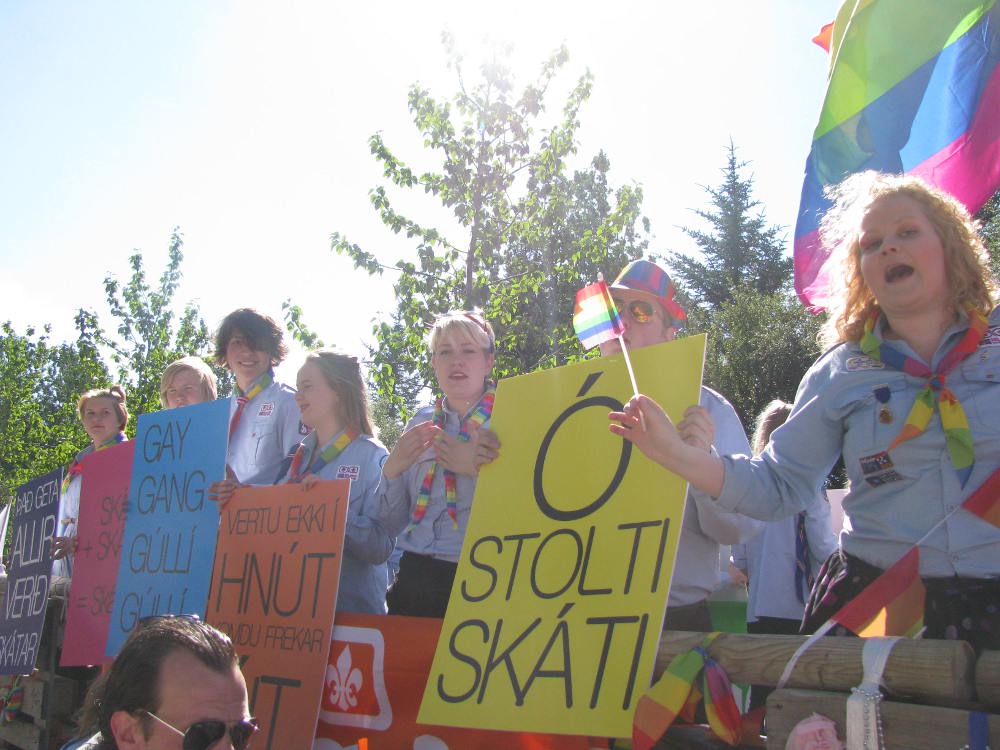 Ó stolti skáti = Oh Proud Scout. I’ve a feeling this might be a pun on Ó stælti skáti (= Oh Mighty Scout), a scout song… well, it is the Reykjavík Pride parade after all. 😀

Signs behind the yellow one say “Vertu ekki í hnút, komdu frekar út” (= Don’t be “tied in a knot” – just come out), Gay Gang Gúlli Gúlli which seems to be another campfire song pun of Ging Gang Goolie. I can’t make guesses to the pink sign because there’s so little of it to be seen but the purple in the back says Það geta allir verið skátar (= Anyone can be a scout). This may again be a song pun on Páll Óskar’s Það geta ekki allir verið gordjöss (= Not everyone can be gorgeous) or it may be a reminder of how homosexuality may even get you thrown out of your scout team in some countries. Possibly it’s meant to be both. 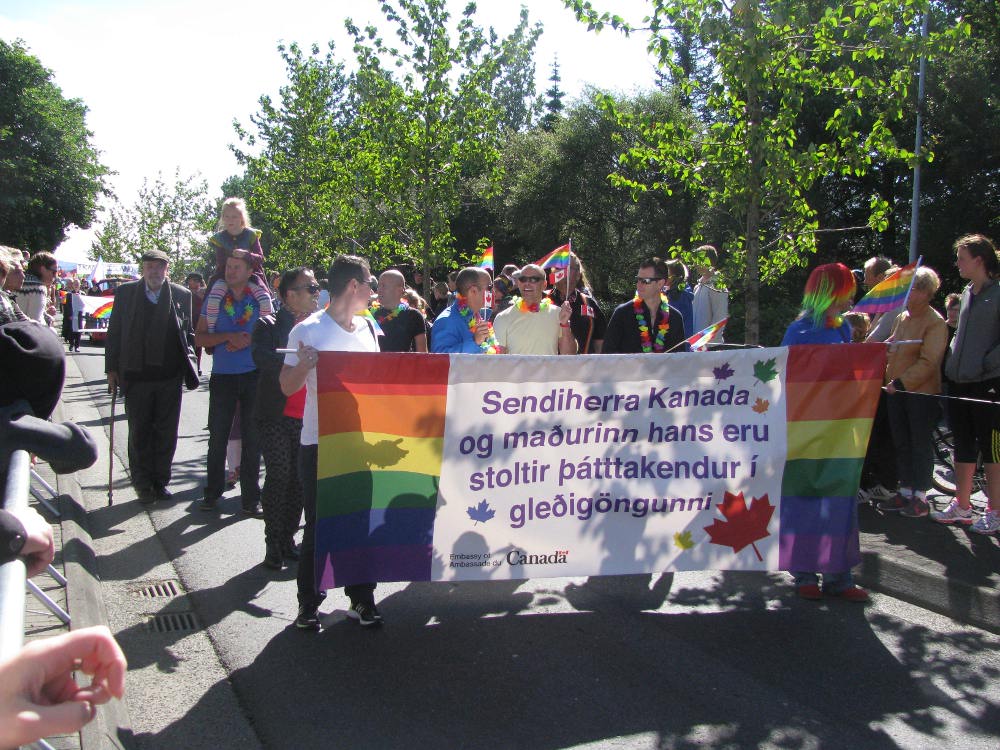 “The ambassador of Canada and his husband are proud participants in the parade.”

Gleðiganga = Pride parade, lit. transl. “happiness walk”. If you want to talk about parades in general the correct word is skrúðganga. 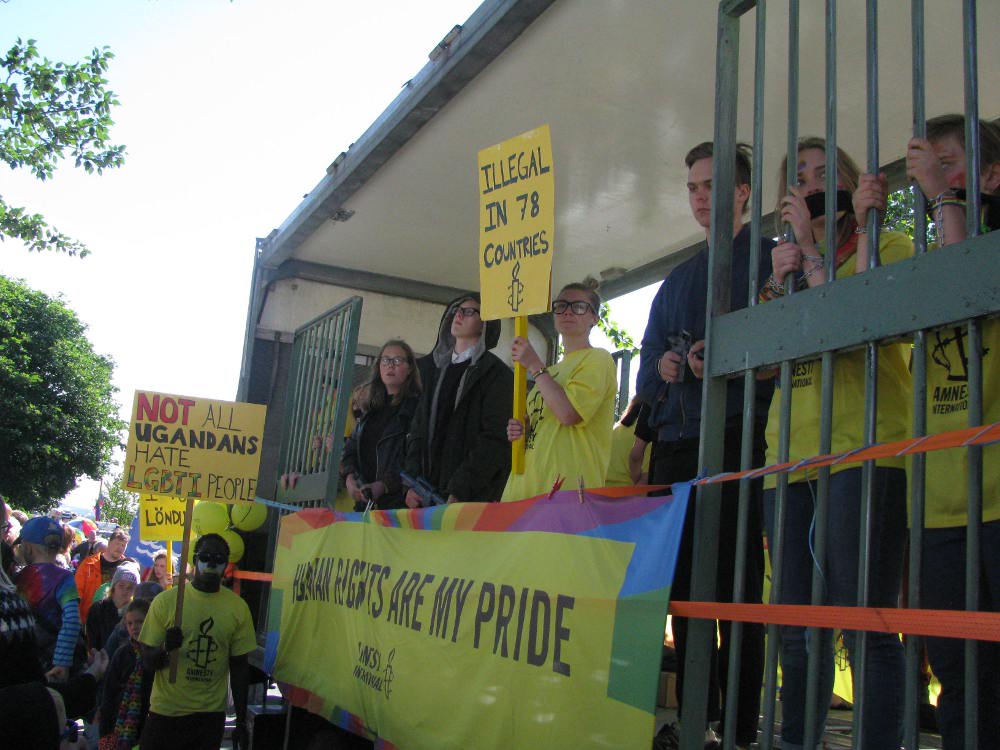 Some floats have a more serious message despite the joyous feel of the parade in general. It’s not unusual to see people from other countries partake in the Rvík Pride.

Samkynhneigður = homosexual, lit. transl. “same gender disposition”. For women you use samkynhneigð, for men you add the masculine -ur ending. 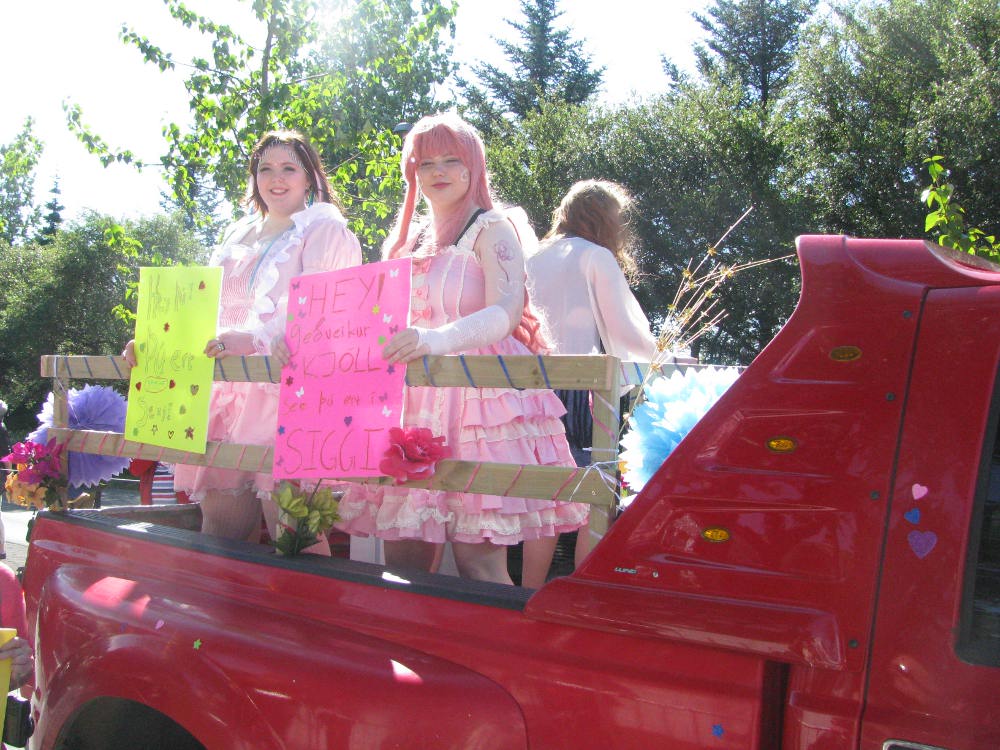 Wow, super cute! Pink sign says “Hey! Geðveikur kjóll sem þú ert í Siggi” (= Hey! Awesome dress you’re wearing Siggi). Siggi is a nickname for a Sigurður, which is a male name. Funnily geðveikur would translate literally as “crazy” but in spoken Icelandic it’s typically used to mean something brilliant, or occasionally surprising. It can also be used to mean simply “totally” or “very” when in combination with another adjective. 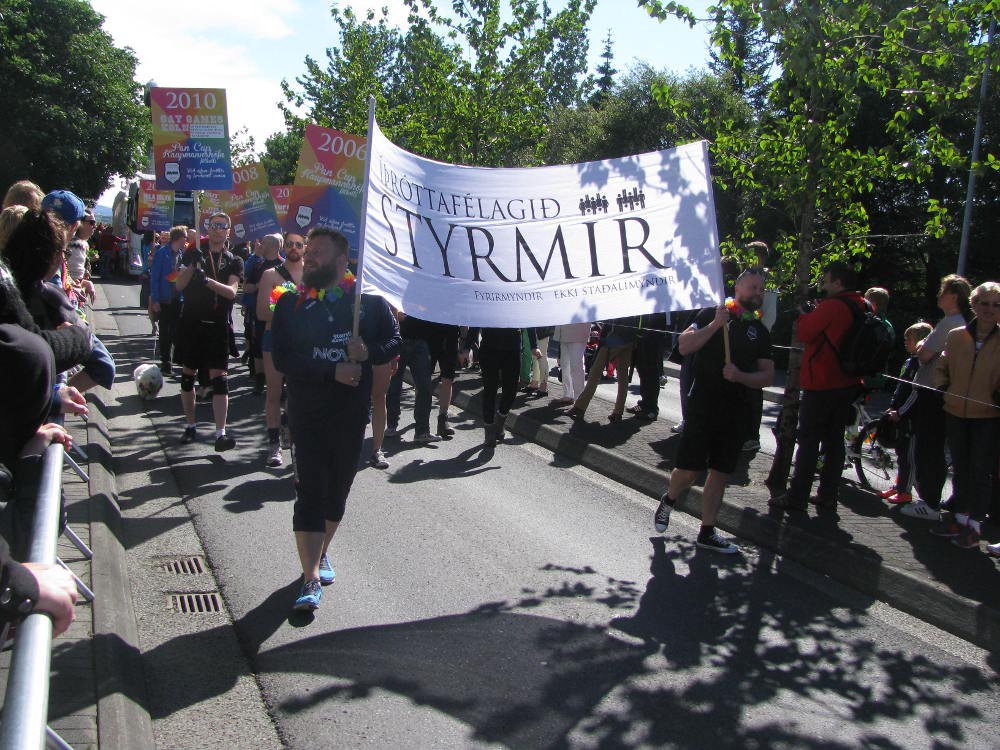 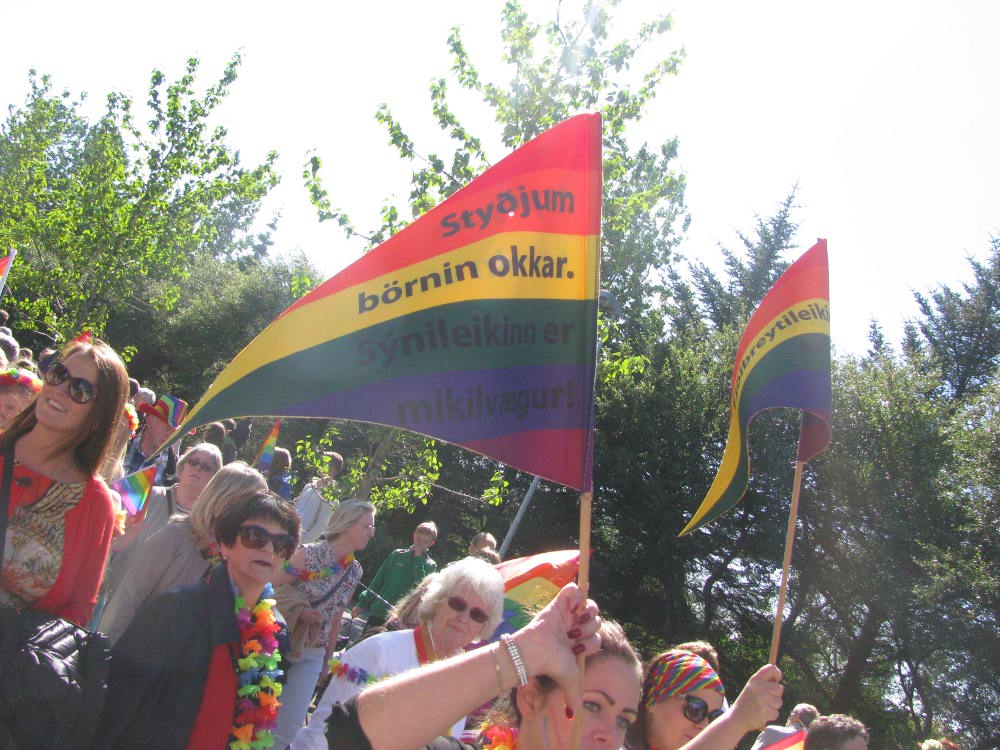 My personal favourite of this year’s parade signs was “aldrei nóg homo“. It’s quite a witty pun on English and Icelandic, something that the Icelanders absolutely love to do: technically speaking it translates as “never enough gay”… except that nóg homo is pronounced exactly the same as “no homo”, in which sense it could also mean “never no homo”. 😀 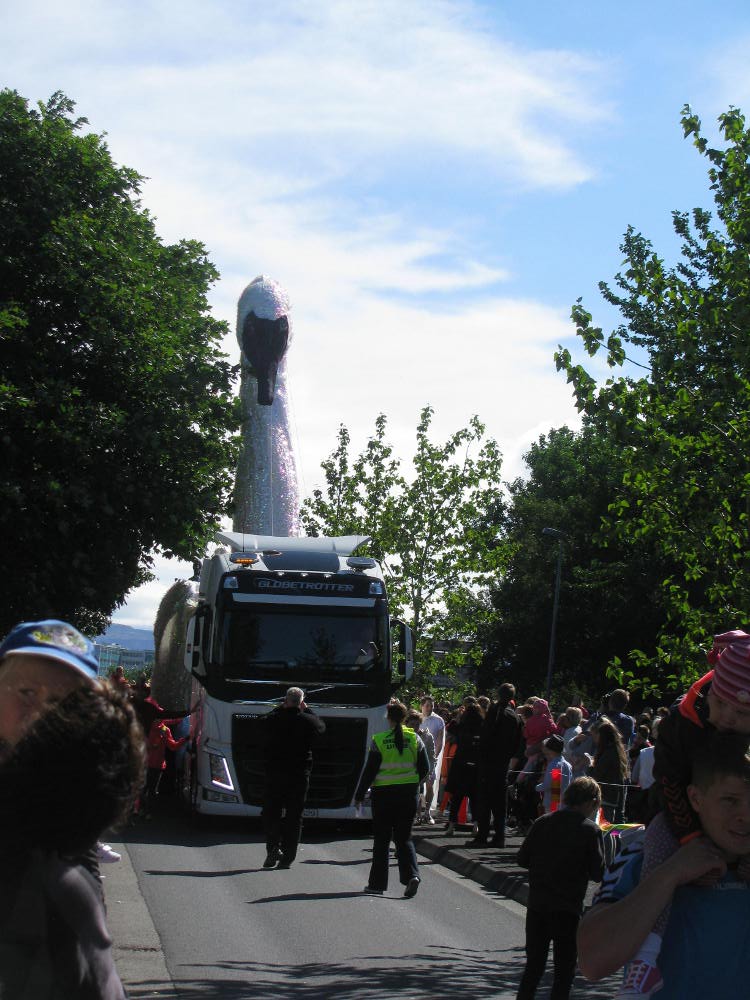 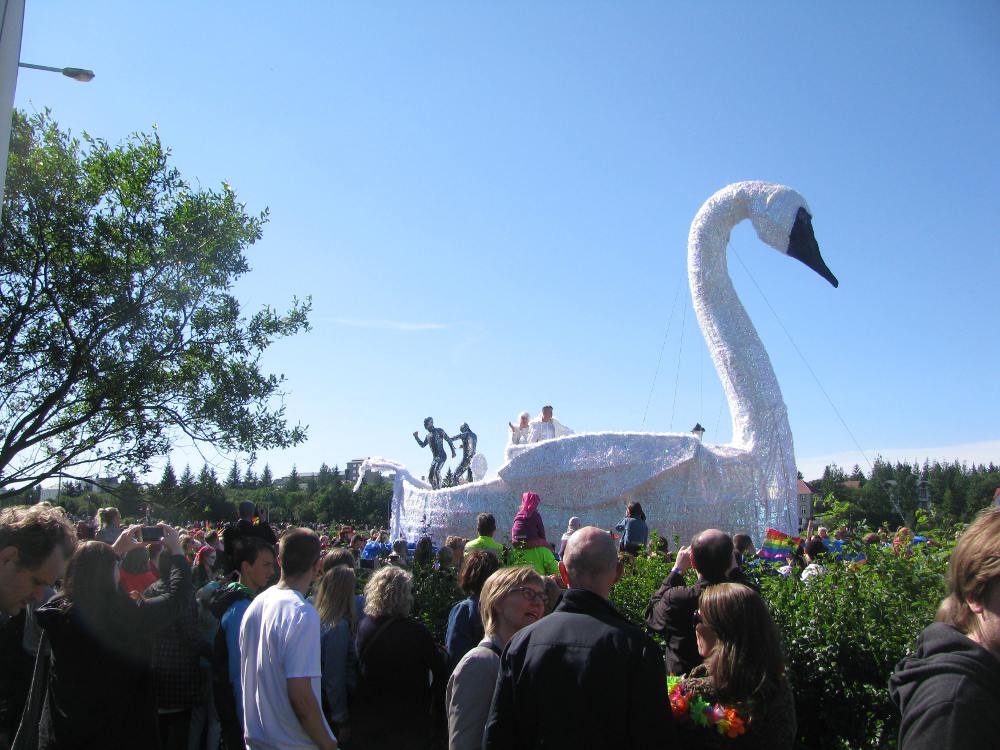 Ahem. Another tradition seems to be that the last float of the parade belongs to Páll Óskar and that year after year he does his best to overdo the previous year’s one. His float is always the big surprise everyone’s waiting for, glittery, huge, full of surprises and needs a whole team of volunteers of its own who walk beside it through the parade to make sure no one gets so excited they’d try to run under its wheels. When you see this float you know a few things: number one is that the parade is ending. Number two is that glitter cannons are a staple of his floats so close your mouth when you see one of those being prepared or risk eating confetti. The third and the most important point is that it’s time to follow him downtown because the party’s only starting! 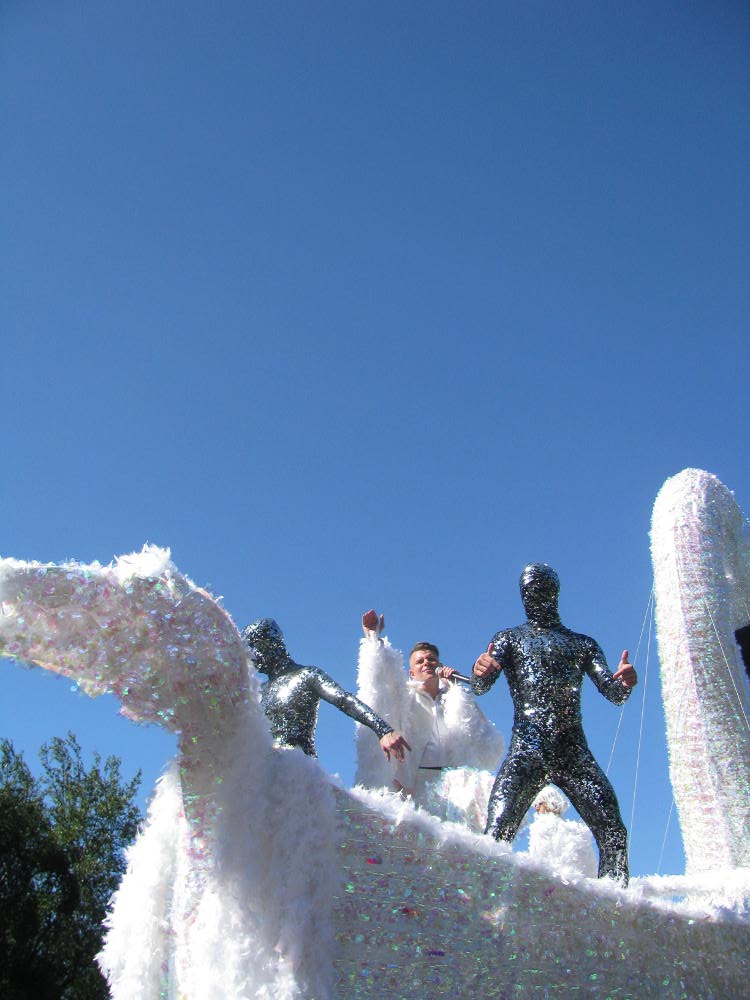 See you in the next year’s parade perhaps?

Hommi = homo. Can be used in both a derogatory and harmless way, but it’s usually obvious which meaning it is.

Intersex fólk = intersex people. Some terms are so new that there isn’t yet an official Icelandic word, or if there is it’s not in use. A good example is “asexual” – despite my best efforts I haven’t yet found a proper Icelandic term for it. Not to say there aren’t words for people who don’t like sex but most of them aren’t that nice.

Pictures and sounds from the parade. I’m not used to this much sunshine, I burned my nose! 😀

Over One Fourth of Iceland Attend Reykjavík Pride. (link)