The day of sailors. Posted by hulda on Jun 9, 2016 in Icelandic culture, Icelandic history 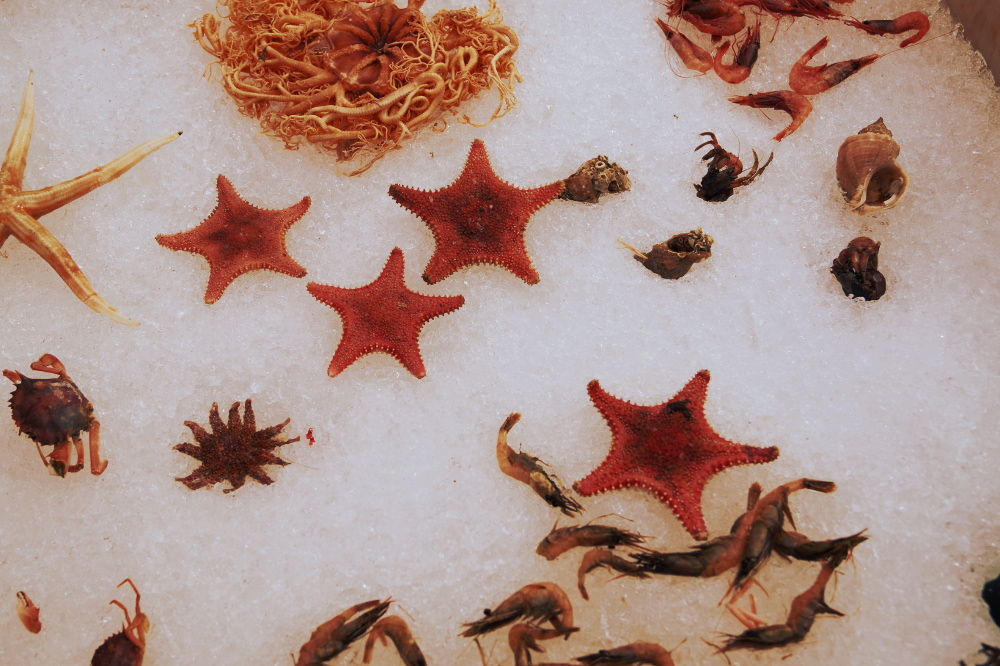 Last weekend we had Sjómannadagurinn, the day of sailors, and the harbor area was full of all kinds of sea-related activities. It’s held annually on the first Sunday of June unless Pentecost falls on that day: on those years it’s held on the second Sunday. It was first held on 6th June 1938 and since 1987 it has been a day off for all sailors. 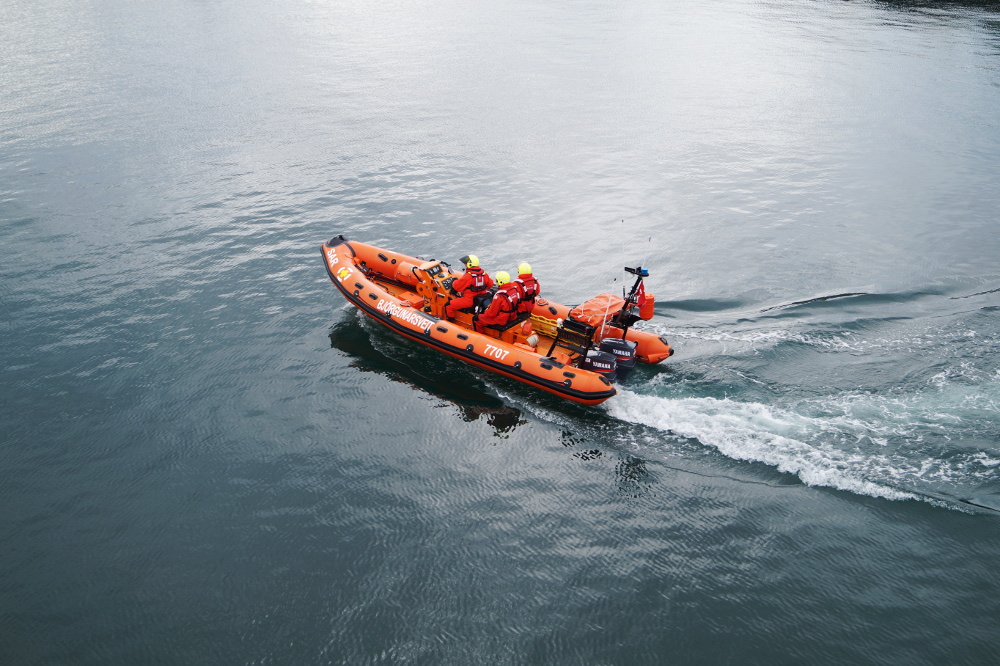 Björgunarsveitinn, the voluntary rescue units, had a very visible presence and no wonder. One reason for celebrating this day is to remember all the people who died at sea and in Iceland’s case that’s… a lot of people. For a large part of Iceland’s history people couldn’t swim and falling into the sea meant therefore an almost certain death, but even if you could swim it only helped you that far. North Atlantic is cold and hypothermia sets in fast, and not everyone can be like Guðlaugur Fríðþórsson (link) who survived in 5°C water for six hours after his ship capsized near Heimaey. 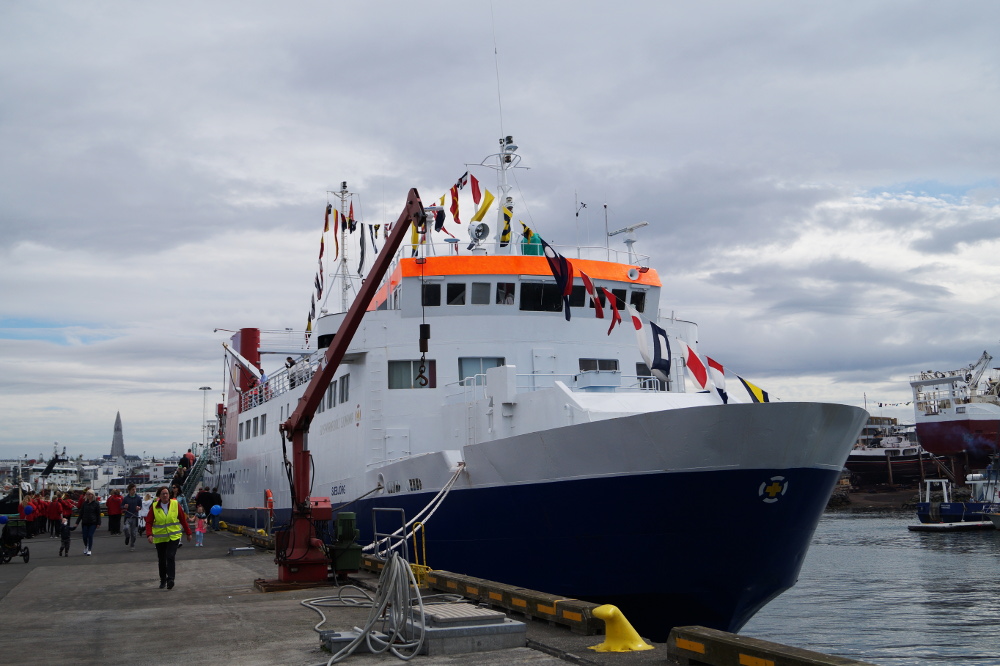 Here’s Sæbjörg, a skólaskip (= school ship, a ship where people are taught sea rescue etc.) as it says on her side. Sæbjörg is a woman’s name, but it can also be translated to mean “sea rescue”. 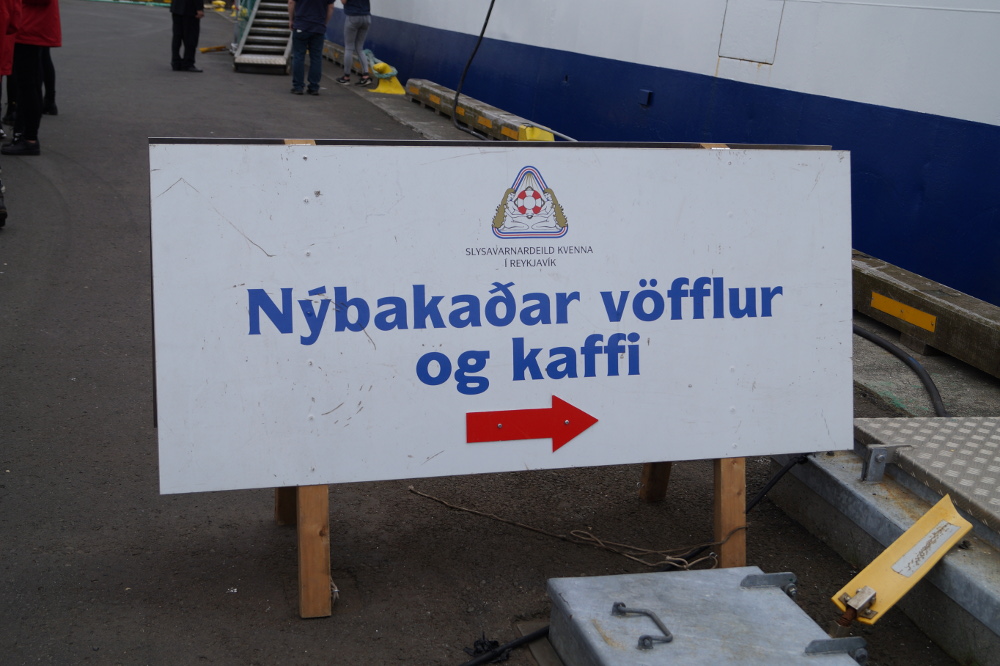 Annnnd this is one effective way of creating an almost magnetically inviting entrance! Sign says “newly baked waffles and coffee” so obviously I had to go have some. The whole time we spent on the ship there was a steady flow of people coming in for waffles, and a marching band parked right outside of Sæbjörg created quite a festive atmosphere. 😀 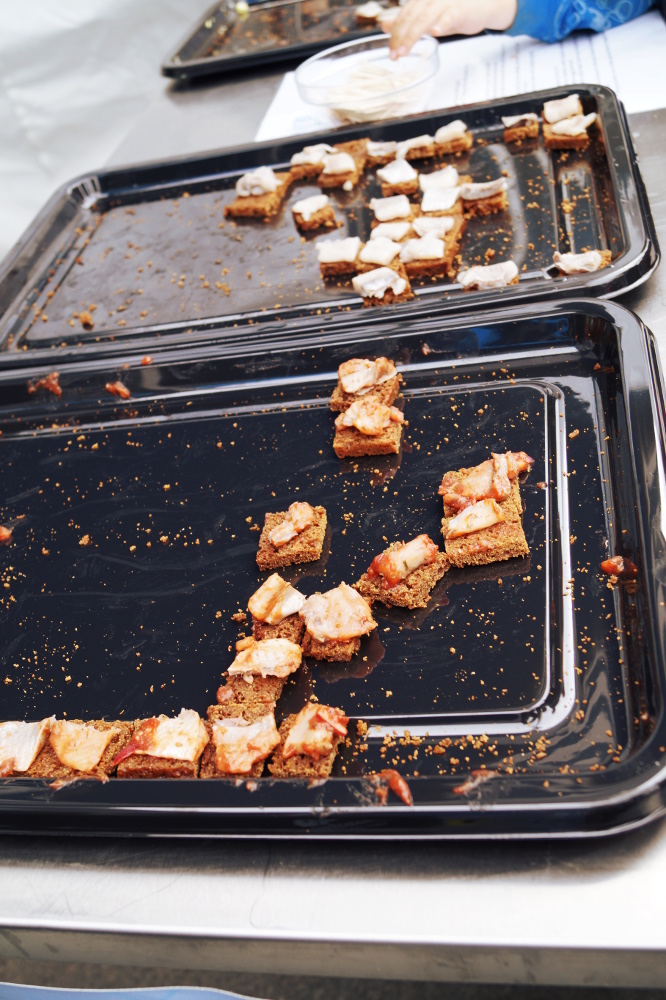 Waffles may not sound like something you’d eat at a sea-related festival, but no worries. You can always find yourself some fish treats instead, such as pickled herring, cod liver pate, dried fish, seaweed “crisps” of many types, all kinds of spices and herbs for fish and so forth. This year there was also a booth for trying grilled whale steak. Beware though if you see off-white/cream coloured cubes you don’t immediately recognize, that may be something… traditional. Possibly milk-soured whale blubber, although rotten shark can also happen. 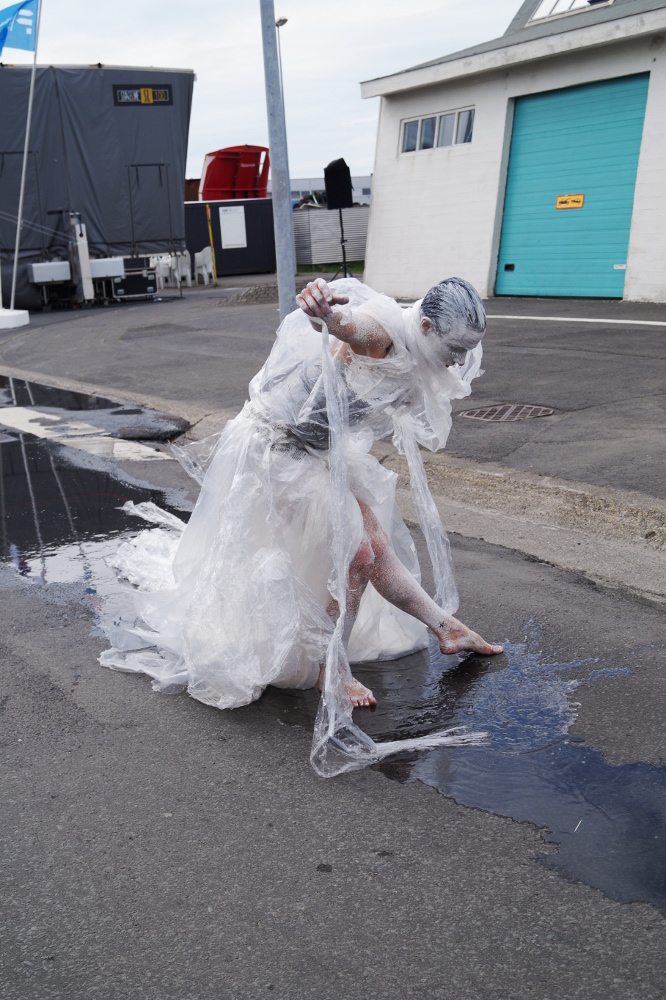 Environmental issues were on the forefront, especially the amount of plastic that ends up in the sea. I’m imagining this performance might have been about that. 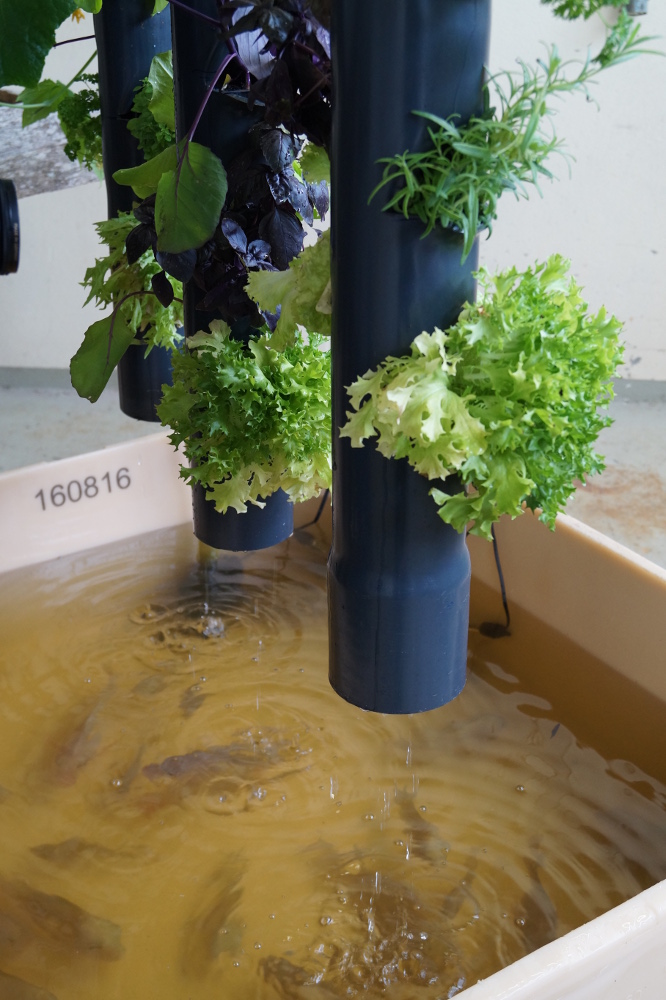 Another building was showcasing all kinds of marine inventions such as these hanging gardens that were nourished by the water from the fish tanks. I wish I had asked more questions about how this thing works but there were a lot of people and I got shy. :Þ 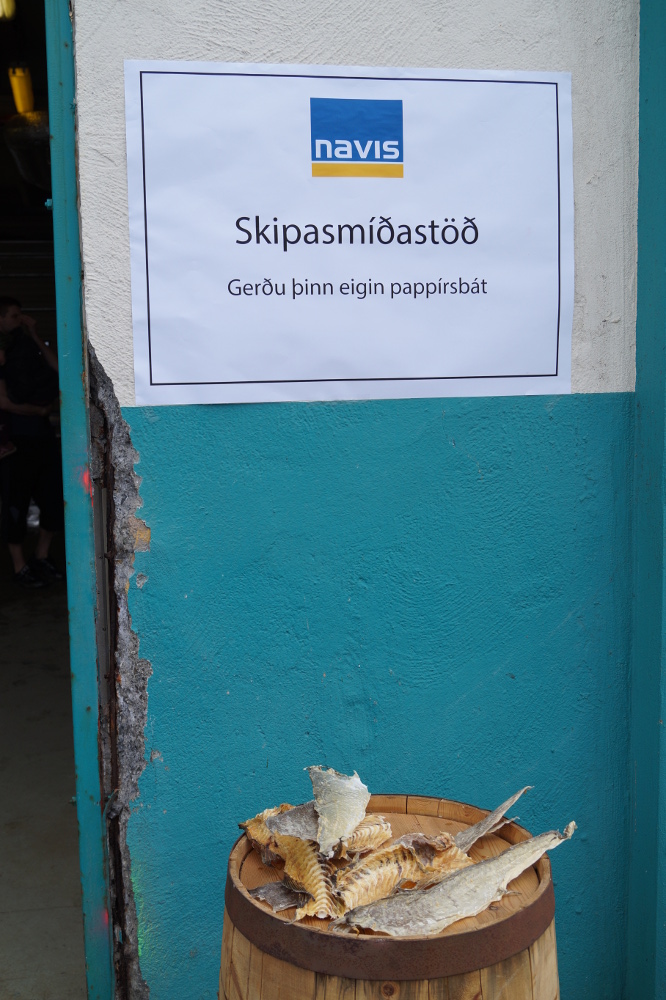 “Ship-building place, make your own paper boat”. The dried fish on the barrel were a mysterious addition, I’ve no idea how they tie to the origami boats. 😀 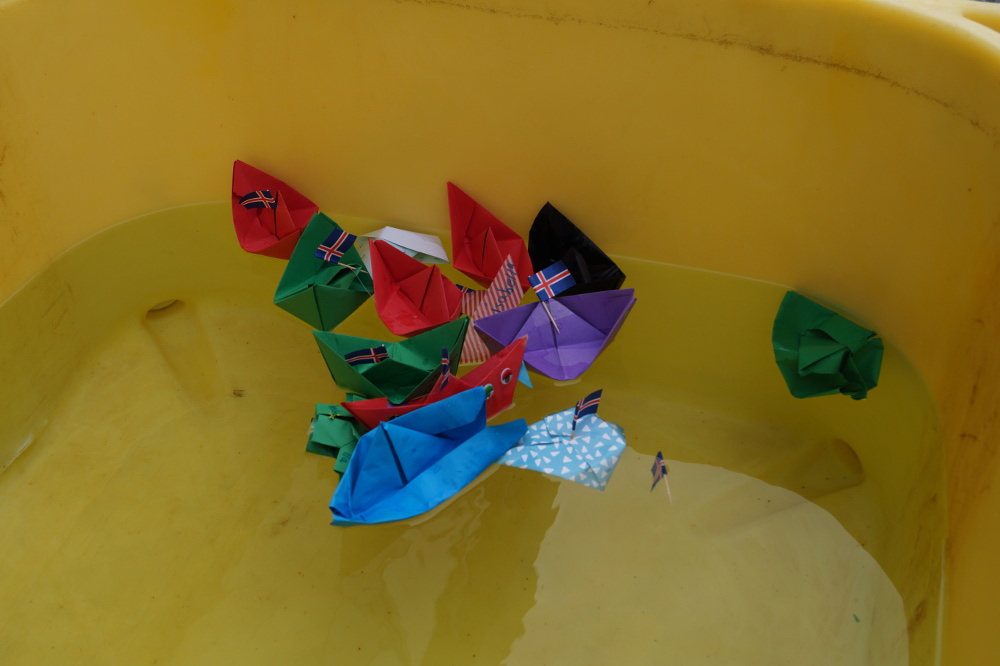 A small selection of aforementioned paper boats. There were instructions for three kinds of origami boats, paper for folding them, little flags because why not, and lots of stickers to decorate them with. 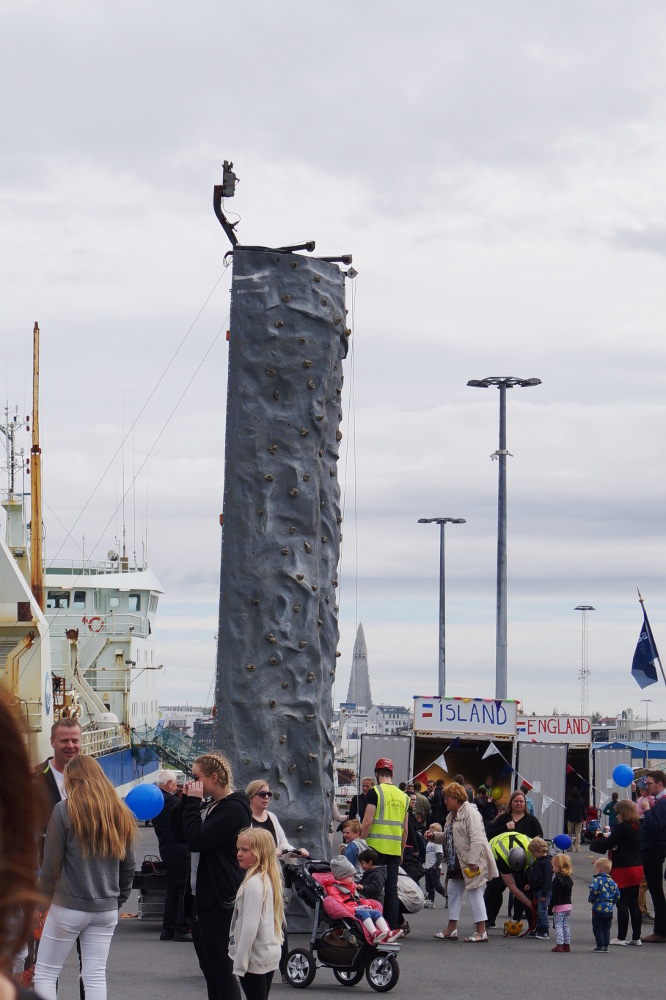 Are your children still restless or otherwise have too much energy? How about you take them to climb this huge tower?

The queue to this one was really long and yes, it was meant for children specifically. Iceland tends towards unusual attractions for children, such as sword fights on Independence Day and axe throwing at the Viking Festival… 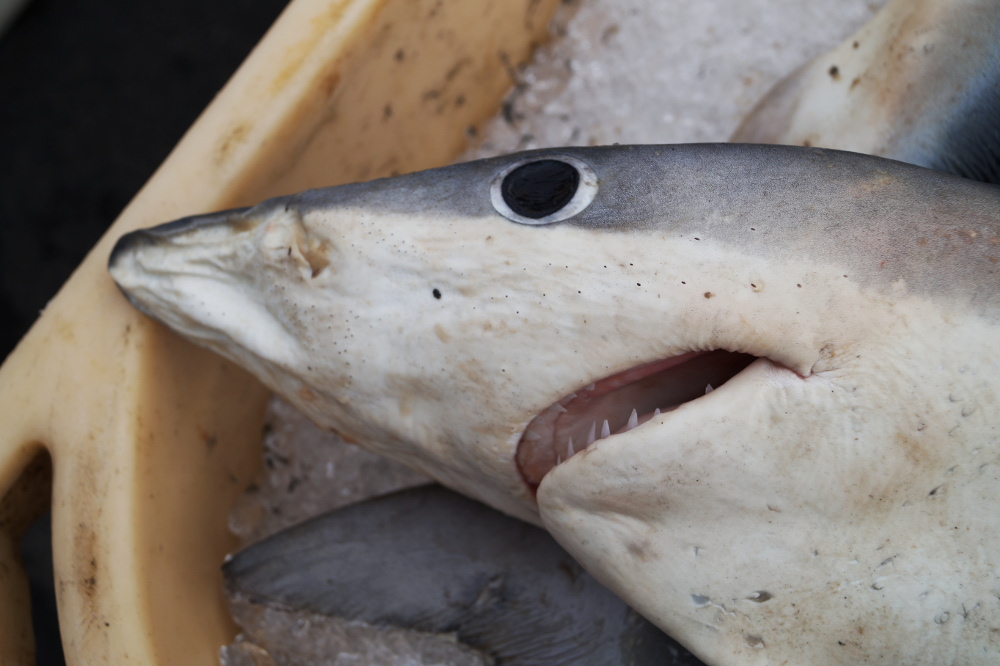 My favourite activity though, the fish show! All kinds of marine life, both typical catch and unusual side catch are showcased in huge barrels of ice. People can even touch them if they like (and they like, you always see someone poking at something as you walk along)(of course I’m not saying I would ever do that)(did you know that sharks have surprisingly rough skin). 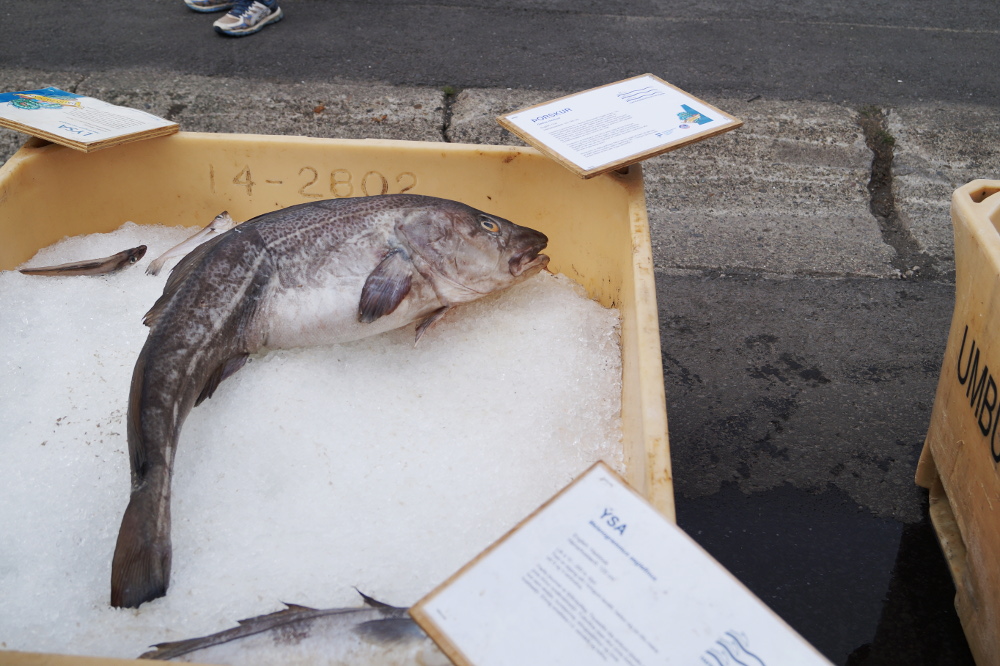 It’s also a good moment to gather up some new vocabulary for this blog. Here are two well-known ones, Þorskur (= a cod) and ýsa (= a haddock). Especially cod was historically important for Iceland as it was one of the few items Denmark allowed Iceland to trade out, Iceland’s country symbol was a dried cod before the independence movement got rid of it as an unwanted reminder of the time under the Danish crown. 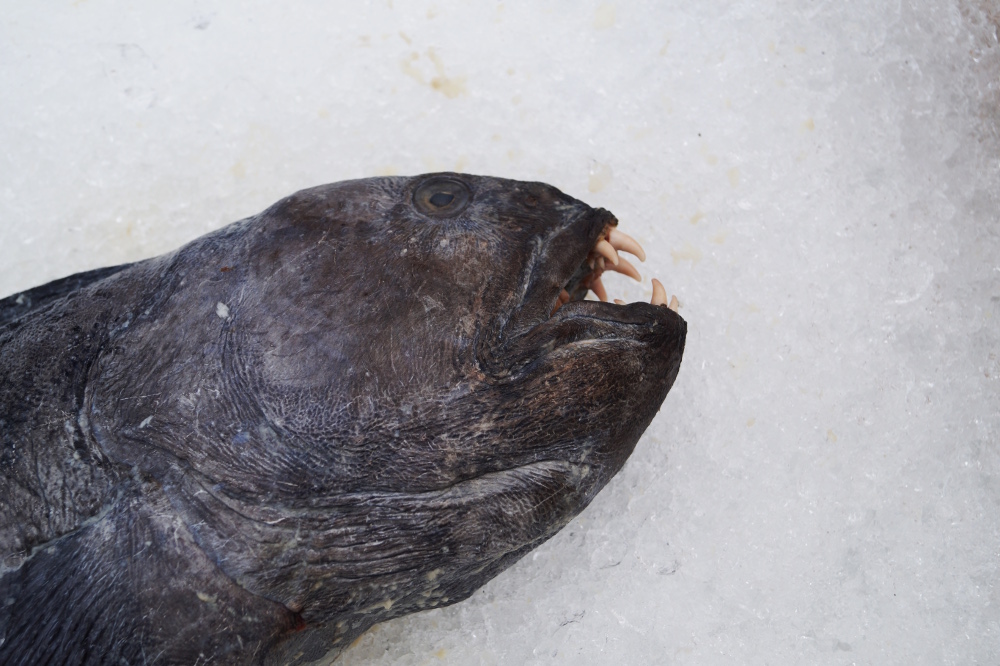 This fellow here is a steinbítur, the Atlantic Wolffish. The Icelandic name means “stone biter” and for a reason… look at those teeth! 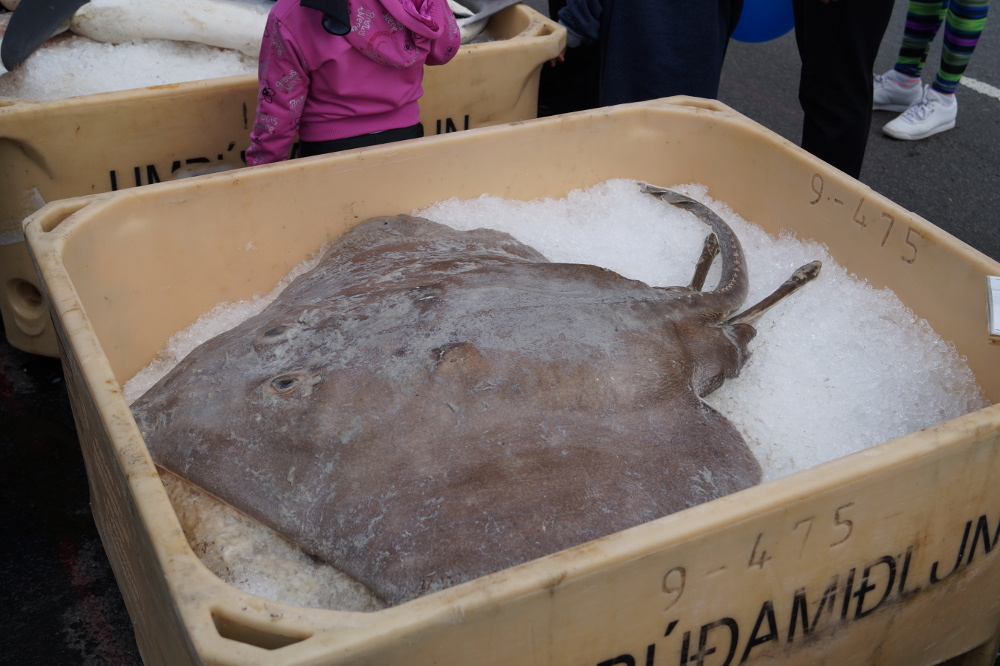 A skata (= ray). Looks harmless enough, right? Culinary-wise it’s everything but. Putrefied skata is a seasonal delicacy around Christmas and for that one day the whole city smells so unbelievably bad. You can tell which people have eaten it: they all smell like putrefied fish.

Those who do like it absolutely love it though, so I’m guessing it’s just one of those foods you either love or hate. Someone once compared it to durians which makes a lot of sense. 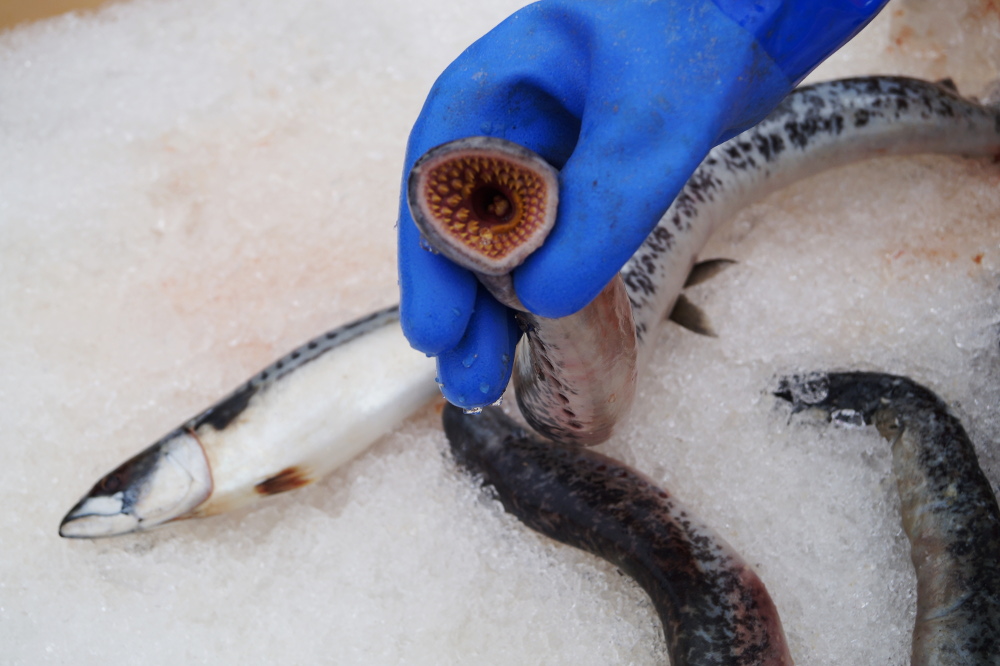 There are often people near these barrels ready to teach you a thing or two about the fish that are on display. These ones were a huge hit among kids. 😀 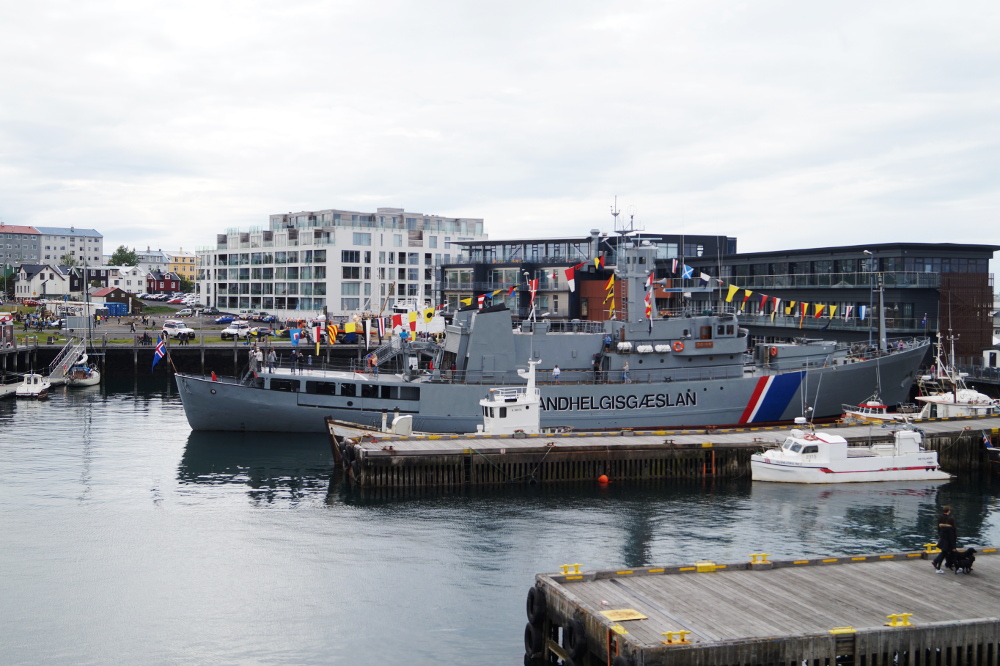 Talking about the Cod Wars, here’s a ship that took part in it. The name’s Óðinn and you’ll find this ship always parked by the marine museum, you can buy a ticket to get a tour inside. On the Sjómannadagurinn entrance to Óðinn and the museum is completely free (but be prepared there’s going to be a lot of people). 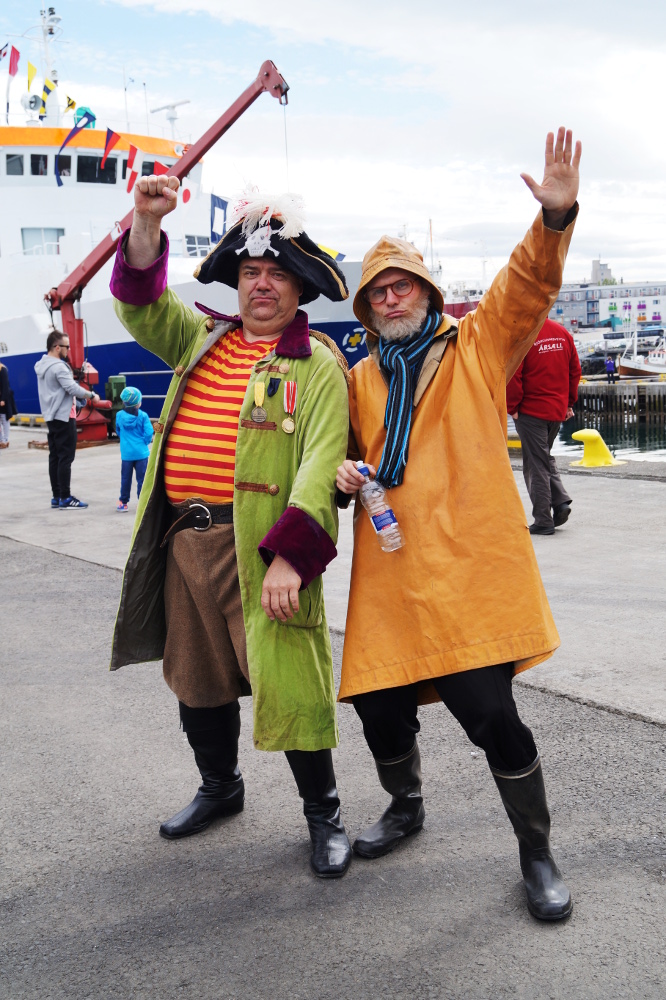 A pirate is sjóræningi in Icelandic, a fisherman is fiskimaður. See you next year?