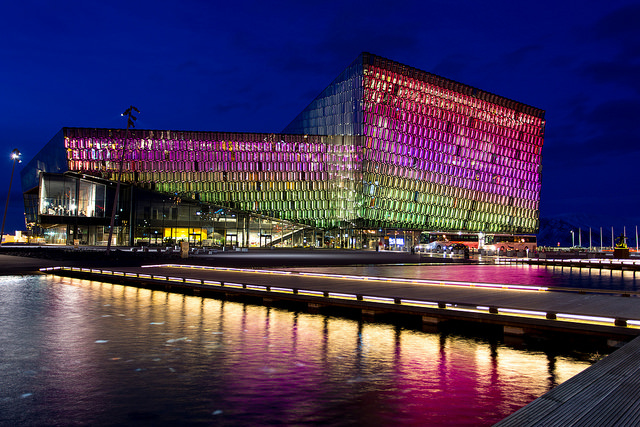 This past weekend, I had the privilege of attending the 5th annual polyglot conference, which was hosted here in Harpa in Reykjavik, and organized by the absolutely spectacular Richard Simcott and Alex Rawlings. There are obvious reasons that I’d go to a Polyglot Conference- which is, Richard emphasizes, for all language lovers: I’m an intermediate speaker of several languages, a beginner in a few others, a hobbyist, music listener, poetry reader in even others. It’s a no-brainer that I’d go.

I want to say, first of all, that this was the absolute most uplifting conference I’ve been to all year (my fourth in the last 6 months). I felt very much at home in this environment, with foreign languages swirling around me, laughter and lightness across borders. I was in a roomful of people who felt, very deeply, that language should occupy a prime spot in their lives: it is their stabilizing center.

Two polyglots, in particular, stuck out to me:

One, Alexander Arguelles, sat with me and carefully explained approaches I might take to keeping my languages separate and developing them. He said that I needed, first, to organize my mind. He said to imagine drawers. I open the Icelandic drawer when I’m practicing Icelandic. Then I close it. Imagine closing it. See, feel, and hear closing it. Then, if I want to work on my German, I open the German drawer, and keep it open while it’s in use. Then close it when I’m finished. Organize my mind.

Alexander, I later found out, is a famous polyglot. His German was beautiful – I should’ve expected as much. He sat with me patiently, let me work out my thoughts – he spoke clearly, knowing that I’ve been away from Germany for years. He is a teacher, and  he’s worked to be a polyglot, learning his first second language – French – at 11 or 12. And he is a systematic learner, meaning that he learns in a highly structured way.

This is in contrast to Richard Simcott, who, in a group hug and huddle later that day, advised me to give context to language. He said, in essence, that hearing, observing, touching, writing, reading the grammar was the key to grasping it. Talking to people. Keeping the language in my ear. Knowing that Icelanders say mér er að kenna and not mig er að kenna. His incredible mind creates shapes around the language he hears by simply participating in it, living in it.

Maintainence means returning to the language, over and over. It means switching back and forth – opening and closing drawers. Remembering, continually using, grasping onto. And it takes devotion – time – but the payoff is that you don’t lose a language (e.g., I can’t remember Russian well, though I had excellent teachers and was top of my class at that time).

I believe I’m somewhere in the middle. I’ll be the first to say that I’m – for what feels like the first time in my life – not the best. I’m also not the worst. I’m somewhere in gray area, making my way through Icelandic, and everyday offers a number of new opportunities, resources. And it isn’t a requirement to be in Iceland – either.

I’ll continue to post resources for talking, listening, and reading. But in the meantime, I have one additional suggestion, brought to you by Jared Gimbel, of A World With Little Worlds.

Jared gave a talk on the merits of learning language through play – literally,. video games, because playing those games in a foreign language means that (a) you’re using your downtime to get better at your chosen language, (b) you’re building a literal palace of associations – sights and sounds that are more vivid than in the ‘real world’ that will help you to recall words, and (c) depending on the game, you’ll learn to speak more (or less) like a native, depending on the genre. There are several games available in Icelandic, and the app Steam lets you search by language.

I’ll be trying it out myself this week!