Icelandic Fisherwomen, Ruling the Sea One Pair of Trousers at a Time Posted by Meg on Mar 18, 2018 in Icelandic culture, Icelandic customs

Happy March, everyone! We´re just approaching the end of the old Icelandic calendar month Góa, and I thought it might be nice to pay tribute to a few Icelandic women. And not just any women, but women of the sea– so-called sjókonur.

Many of you certainly know of the densely-populated Icelandic fisheries – mainly women on land – and Iceland’s heavy reliance on the fishing industry, a dependence that goes back to the throes of the Danish empire’s rule over Iceland. Iceland has been host to “Cod Wars” — you read right — not Cold Wars, but COD wars — two times in its history because of the richness of its fishing grounds. The Icelanders, the Danes, the Germans, and the English have all at one time or another fatted their billfolds with Iceland’s fish. 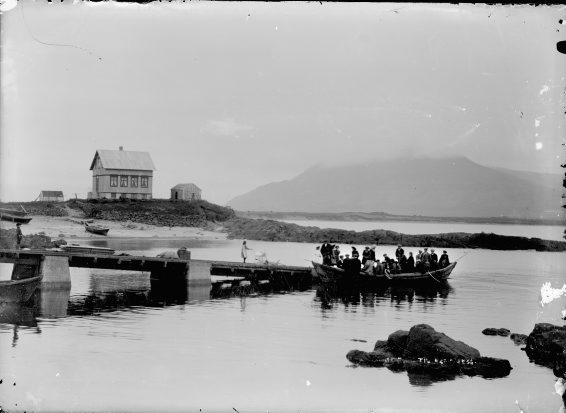 Few Icelandic farmers (ca. 15%) had access to the sea in the 19th century, despite the prevalence of farming. In the 18th century, as fishing became increasingly valuable, those farmers that did have sea-access, and thus the opportunity to send out fishing boats, contracted farm laborers – who had few rights and no entitlement to the profits of their catch – to work on their farms. These farmhands doubled as fishermen and women, with distinctions between them made not by gender, but by brute force – by strength. Nevertheless, seawomen were entitled to 1/3 of the wages of a male fisherman, had to have special permission granted by the local magistrate to wear, e.g., the water-repellent leather pants required for their work (instead of a wool skirt). These women, with few exceptions, are not present in most accounts of Iceland’s fishing exploits – probably because the histories were written, as is often the case, by men. When women do show up, it’s either because of tragedy or an extraordinary feat. Despite that, going to sea wasn’t necessarily a revolutionary act for women in Iceland, unlike in Canada and Australia. Rather, it was a part of the job, and a part of daily life. Into the 20th century, as fishing technology improved and laws around marriage and homestead ownership changed, women became more and more bound to the land and their duties as wives and mothers: at which point, they begin to disappear from the sea.

But they existed, despite scant mentions. Two of the best known Icelandic fisherwomen — Þuríður formaður (Þuríður the foreman: LISTEN) and Látra-Björg (Björg Einarsdóttir: LISTEN) — struggled for their positions as fisherwomen, and are best known for exploits that aren’t directly related to their work at sea. Látra-Björg was an important poet – a very independent, strong, and prolific poet – who is best recognized for her creative work (skáldskapur). Þuríður was a powerful fisherwoman, who took up the unlikely work of the ‘foreman’ or ‘skipper’ of her fishing crews. She showed a natural ability for fishing, which her independence complemented: when in trouble, when her rights or the rights of those around her were compromised, she sued for reparation, to make things right. When she was harassed by a man once, for example, who asked if she was a hermaphrodite (essentially), she took the matter to the local magistrate. When she was denied her fair pay as a foreman by the farmer who owned the boats, she went to the local authorities to resolve it – and it worked. Remarkably, during her lifetime, equal pay between fishermen and fisherwomen came into law (1775) – and the law, according to historian Margaret Willson, was followed relatively well.

Látra-Björg was considered a fiskin, or a person with a supernatural sense of the sea. She was able to read the weather, predict when seals would swim into certain areas so that they could be easily netted. She knew when to row out, when to row in. She was so good, in fact, that she was able to write poems while out at sea in an open-decked (meaning no-deck) boat. She was so remarkable, in fact, that there is a folktale about her.

Here’s a poem she wrote to poke fun at the men who didn’t row as well as she did:

Do row better my dear man,
Fear not to hurt the ocean.
Set your shoulders if you can
Into harder motion.

For more interesting photographs of the Reykjavik Harbor specifically, from the late 19th and early 20th century, please visit this wonderful Flickr account.