Indonesian Street Food Posted by sasha on Aug 24, 2017 in Uncategorized

There are tons of delicious things to eat across Indonesia. You don’t have to sit down in a restaurant to enjoy the local cuisine, as there’s plenty of amazing Indonesian street food. Don’t be scared – pull up a plastic stool and join the crowds munching in the street.

An Intro to Street Food 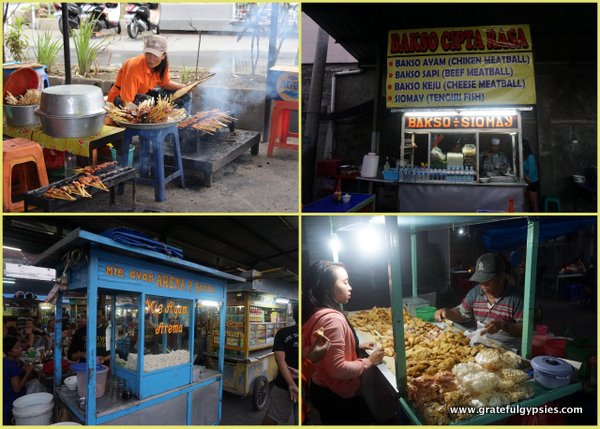 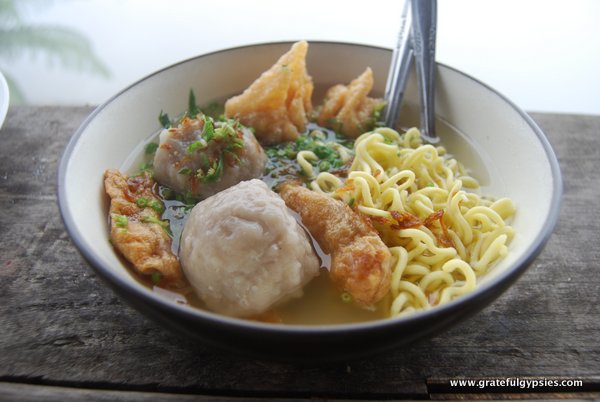 This just might be the most ubiquitous street food in all of Indonesia. Bakso (meatball soup) seems to be on every corner, from the busy streets of Jakarta to small towns in Flores. Even Barack Obama loves bakso!

This classic Indonesian soup usually has one giant meatball and a few smaller ones. It’s best not to think too hard about exactly what meat is in there – kind of like eating a hot dog! Sometimes you’ll get some tofu or fried wontons in there as well. It’s usually only around $1 a bowl, and it’s delicious. 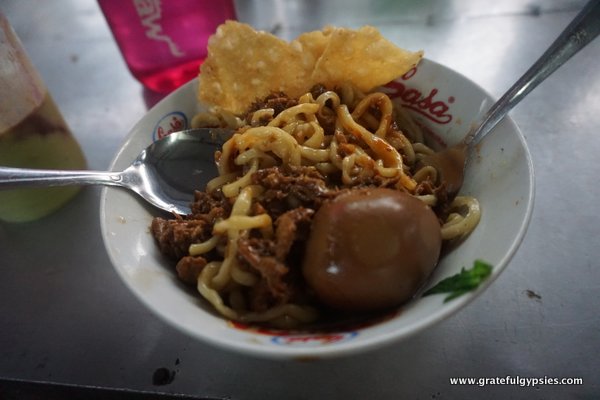 If you’re not into the mystery meatballs, never fear! There’s still a noodle dish for you to eat on the streets of Indonesia. Mie ayam (chicken noodles) usually comes with some seasoned shredded chicken along with a boiled egg. 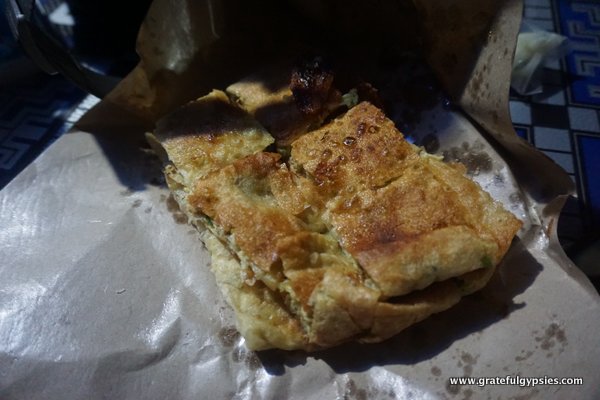 A martabak is best described as a stuffed, fried pancake. It’s one of the most popular street foods across Indonesia, and it can come in two styles – savory or sweet. The savory ones are made with egg and often include minced meat and green onion. The sweet version may have chocolate, sugar, or cheese. They’re usually huge and can be shared between two or three people. 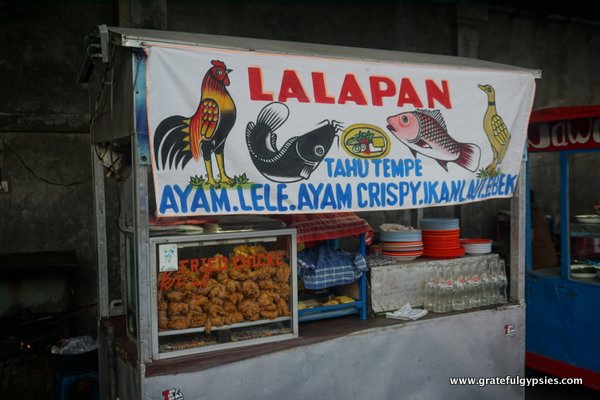 Lalapan is actually just a plate of vegetables with rice, but you usually pair it with some meat or seafood. At many vendors, you can choose between chicken, catfish, or duck. Your plate comes with a piece of meat/seafood, rice, tofu, tempeh, cucumbers, and tomatoes. It’s a complete meal and it will only set you back $2 or so. 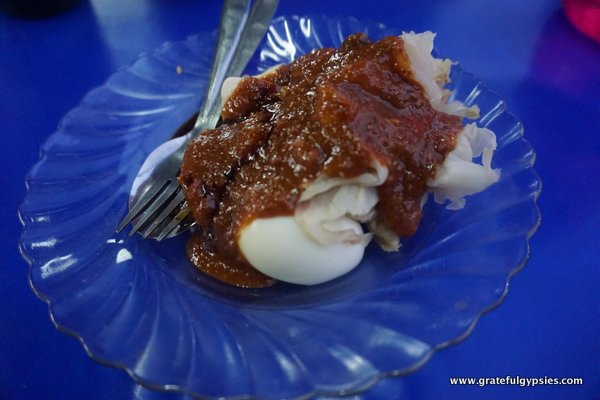 Siomay is Indonesia’s answer to dim sum. What sets this dish apart from its Cantonese counterpart is the liberal use of a peanut sauce that covers the tasty dumplings. They’re most often filled with fish rather than meat. 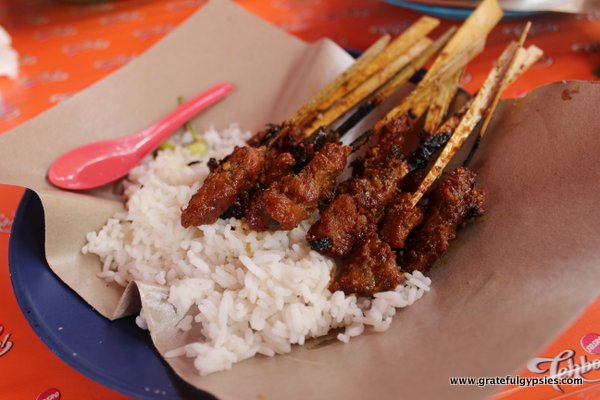 For a quick, yummy snack on the go, it’s hard to beat Indonesia’s meat-sticks known as sate. The most common versions are sate ayam (chicken), sate kambing (goat), and sate babi (pork). They are usually pretty small, so you’ll want to order around 5-10 of them. 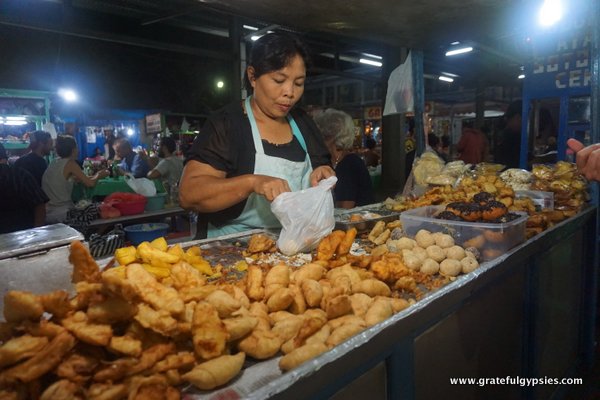 All across Indonesia, you’re never too far from a vendor selling gorengan. These are basically just fried snacks, and they come in all different shapes, sizes, and flavors. Some examples include pisang goreng (fried banana), tahu goreng (fried tofu), and ubi goreng (fried sweet potato). 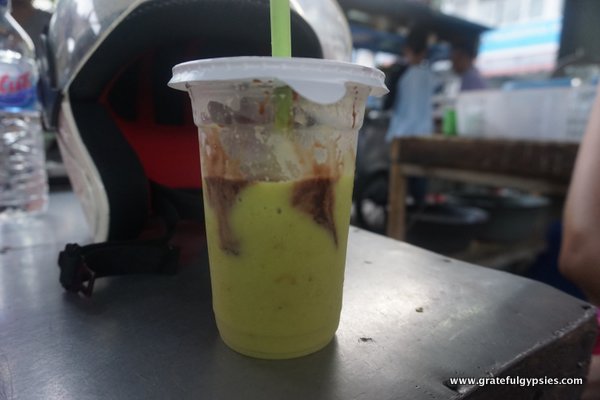 With all that delicious street food, you’re bound to get thirsty. When it comes to street drinks in Indonesia, it’s hard to beat a jus alpukat (avocado juice). Avocado is blended with condensed milk, sugar, and the key ingredient – chocolate syrup. It’s like a milkshake, only better!

As you can see, there are plenty of options for street food in Indonesia. If you’re worried about hygiene, I can just tell you that I’ve had no bad experiences yet. I’ve been to Indonesia three times for a total of 1.5 years and have eaten street food in Java, Bali, Lombok, and Flores. From the bakso guy delivering it on our street, to sate vendors on the beach, I’ve enjoyed every bite!

Have you tried street food in Indonesia? What did you think of it? Leave a comment and let us know!