Bhuel, I guess it was only a matter of time before I checked online, to see how the word “Brexit” is being handled in Irish.  The result is basically what I expected.  More than just one choice. 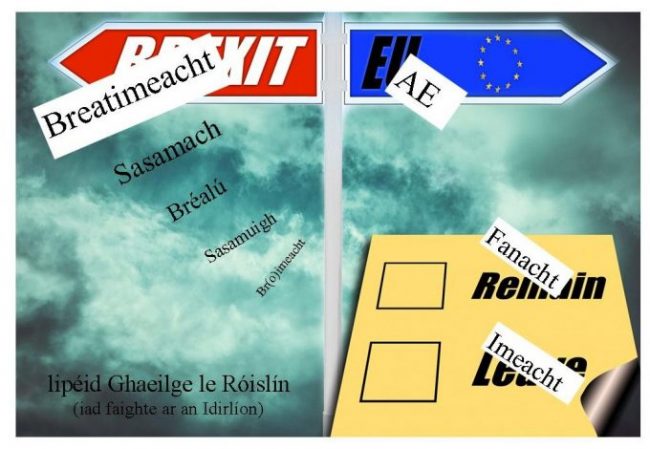 Bhuel, at least we can get some vocabulary mileage out of this issue by translating the words, so we have five choices for ‘Brexit,’ plus ‘fanacht,’ ‘imeacht,’ ‘Aontas Eorpach,’ and more.
(graphic: www.publicdomainpictures.net/view-image.php?image=176869&picture=brexit)

While “Brexit” is often used while writing in Irish (nasc thíos), there is some use of Irish translations of the portmanteau word, most notably “Breatimeacht” (Breatain + Imeacht).  Using Google search,  I found a total of 28 hits for “Breatimeacht,” the earliest easily-datable one apparently being from October 14, 2015, with the following phrases:  “Breatimeacht gan tionchar ar bhuiséad 2017”-Taoiseach and Breatimeacht le plé ag an gComhairle Aireachta.  But the links for these hits appear to be broken, so at the moment I can’t go any further with clarifying when they first appeared.  The links now seem connected to an art marketing website, so I’m not inclined to click on them.  BTW, sure, I’d click on art marketing if I were looking for art, but not when I’m looking for stórfhocal na Gaeilge.

Adjusting the search for Irish lenition, eclipsis, and genitive case, we can also add:

Additionally, as of this writing, there are 15 hits for “Breatimeacht” listed on RTÉ’s website alone, some of which didn’t show up in my Google search.  So I’m sure there are more examples that aren’t showing up in any of my searches, but overall, it looks like both Breatimeacht and Brexit are reasonably widely used within the limited amount of Irish language commentary I’ve found about the issue.

A few other combinations have also shown up, and they are well-crafted word play, but it’s hard to say how much they’ve caught on.  These next two are from https://twitter.com/toibin1/status/738669190513602560

Sasamach (Sasana + Amach).  Very clever, echoing the word “Sasanach” (Englishman).  I get 87 Google hits, but that probably includes about 10% coincidental combinations from other languages.  So, about 80?  With mutations, no hits so far (tSasamach, Shasamach).  Can this word have a genitive case ending, since it’s based on an adverb?  Ceist mhaith, but all I can say is I get no results for any of the possible combinations I can think of.

Bréalú (Breatain + Éalú).  I get 55 Google hits, about 5 of which appear to be coincidental combinations from other languages.  So, about 50?  Plus: Bhréalú: 3 hits; mBréalú: no hits, and no hits for any form of “Bréalaithe.”

So far, the examples illustrate the varying approach to considering whether the issue is “English” or “British.”  “Sasamach” would technically just refer to just England leaving.  And “Breatimeacht” seems to be the one most found in the mainstream media.

Looking beyond the Twitter entries, I find “Sasamuigh” at http://reajeasa.tumblr.com/post/146414311868/is-sasamach-the-irish-for-brexit-is-it-awesome.  Searching further for Sasamuigh (Sasana + Amuigh), I get total of 6 hits, but 3 are duplicates.   Using “amuigh” instead of “amach” parallels the ordinary usage of these two words in sentences like:

Tá sé amuigh sa ghairdín.  He is out in the garden (stationary).

So far that’s four versions.  I figured someone would come up with a slightly bawdier interpretation, given the possibilities with “imeacht” and the letters “BR” and “broim,” and so they did.  Seo ceist a bhí ag Breandán Delap: “Agus cad é bhur mbarúil faoi Bhréalú nó Br(o)imeacht i gcás Brexit?” (https://twitter.com/jimigogola/status/615828532300808192: 3:25 AM – 30 Jun 2015).  Interesting how “Brexit” is also used in the same sentence.

Actually, isn’t this a “United Kingdom” exit, at least as things stand at the moment?  So couldn’t the portmanteau be based on “an Ríocht Aontaithe” (RA), in which case we could have ” *RAimeacht” or “* RAmach,” couldn’t we?   But so far, I haven’t seen these words at all in any active use.  If there’s another Scottish referendum, maybe we’ll be looking at some more vocabulary, portmanteau or not.

By the way, “exit” as a noun in Irish is generally “bealach amach” or “slí amach.”  Interesting how when we’re looking at one English word, “exit,” we end up with at least four possibilities in Irish (imeacht, fágáil, bealach amach, slí amach).

PS: On a more basic note, for anyone who wants a little more general background on the political situation, this article is an interesting overview:  http://www.bbc.com/news/uk-politics-32810887 (The UK’s EU referendum: All you need to know, By Brian Wheeler & Alex Hunt, 24 June 2016).  Of course, for most people within the UK, this information would probably be “seanscéal agus é meirgeach” by now, but for léitheoirí in áiteanna mar Mheiriceá Thuaidh, it might prove faisnéiseach.   Meanwhile, like many others, I’m waiting to see what effect this will have on Ireland, Northern Ireland, Scotland, Wales, and, well, An Eoraip go ginearálta.