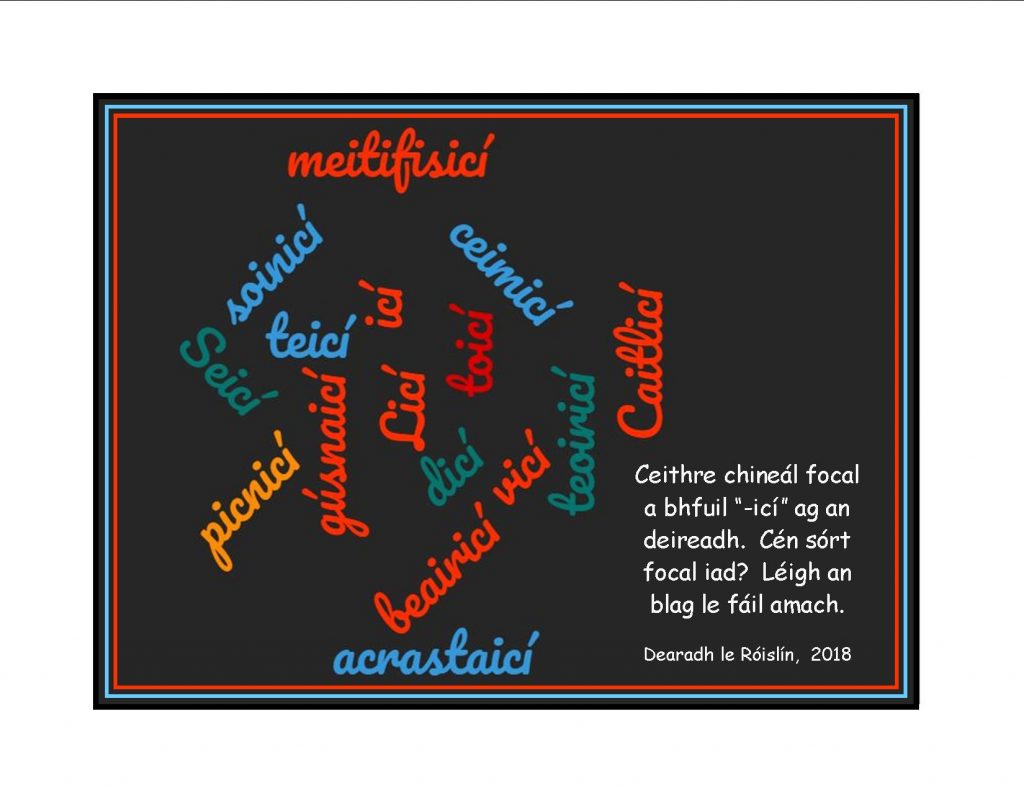 Remember the two recent blogposts about “picnicí” (naisc thíos).  Well, one was really about picnics and the other one was really about counting how many people were at the picnic. Thinking about the word “picnic” (plural: picnicí) and how it might have gotten borrowed into Irish got me thinking about what other words in Irish have the “-icí” ending – either for the plural or as part of the original spelling.  It’s not real common in Irish, but there are various examples, especially when we start looking at inflected forms of words (not just their dictionary-entry form).

So I’ve pulled together a list of four ways the “-icí” ending can be used.  One is as the plural for words like “picnic” or “beairic,” giving us “picnicí” and “beairicí.”   Another is for some occupational terms, like “eiticí” and “teoiricí.”  A third is a specific form of some adjectives that normally end in “-iceach” like “ceimiceach” or “Caitliceach.”  For this group, “-each” is really the adjective ending and this small group of words just happens to have  “ic” before the “-each.”  So when we adjust for the genitive singular feminine, the ending becomes “-icí.”  And finally, there are various loan words that happen to end in “-icí,” such as “dicí” and “vicí.”

Appetites whetted for some more examples?  Here are a few from each of the four groups:

Gúsnaic, gúsnaicí, gooseneck(s), as a part of a mast – I have to admit, this one took me a bit by surprise!

B.. “-icí” as the ending for some occupational terms.  There aren’t a whole lot of these, compared to some other occupational suffixes like “-eoir” (múinteoir), “-aí” (tógálaí), and “-aire” (iascaire).  But there’s a good “dornán” (fistful), anyway.

C.. “-icí” as the ending for certain adjectives in the genitive singular feminine form.  A typical adjective ending is “-each” and if the word happens to have “ic” before that, we end up with “-icí.”

Caitliceach, Caitlicí, Catholic, as in “mic léinn na hOllscoile Caitlicí” (the students of the Catholic University)

Seiceach, Seicí, Czech, as in “ainm na mná Seicí” (the name of the Czech woman)

D.. “-icí” as the ending for some loan words from other languages, some which appear to be recent borrowings from English, some from farther afield.

Licí, no plural, Likhi, an Old Testament name: Likhi was a descendant of Manasseh

So there you have it.  Four different types of words with “-icí” as the ending.  I have to admit that the sound (like “icky”) was part of what attracted me to putting this assemblage together.  And it is interesting that there’s the overlap of “teoiricí” as “theories” (plural) and “teoiricí” (theorist, singular).  Could the occupational term have been ” *teoireoir“?  It seems a little hard to pronounce!

Finally, I wish I could say there was a rhyming equivalent of one of my favorite, fun English words, “doohickey,” but the closest I can come is “Mac Uí Rudaí” (lit. “son of O’Things”).  That’s also the closest I’ve found in Irish for “thingamabob” or “thingamy,” unless you go with the more straightforward “an rud sin” (that thing), “ruidín” (little thing), or “an boc sin” (that buck, fellow).  And no, the Irish for a “hickey” (a love bite) doesn’t rhyme with any of these “-icí” words.  It’s not a loan word.  There are at least three Irish phrases for a “love bite.”  One is “plaicín grá” (lit. small bite or mouthful of love, a diminutive of “plaic,” a large bite or mouthful!) and the others use “greim” (greim grá, lit. love bite; greim seirce, lit. love bite).

I hope you found this both fun and helpful.  Maybe next time dornán focal that end in “-ící [pronounced ee-kee], including “ící” (healer, physician) itself.  Go dtí sin – Róislín

Naisc: The Word ‘Picnic’ in Irish and the Mysterious Insect ‘Créachadóir na bPicnicí’ Posted by róislín on Aug 22, 2018 in Irish Language