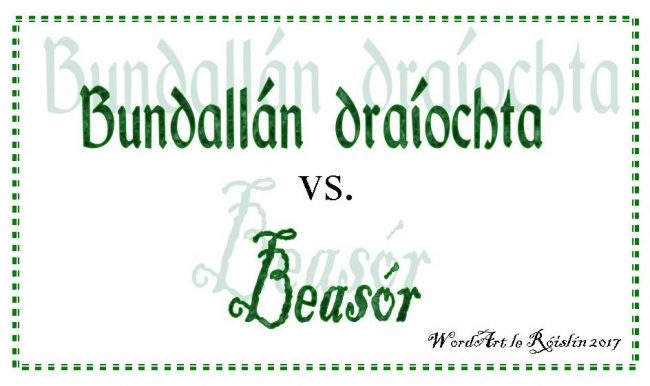 Having now made my way through Harry Potter as Gaeil-ge 3.9411-76470-5882-35 times, I thought this would be a good time to start looking at some of the interesting vocabulary in the Irish translation by Máire Nic Mhaoláin, published in 2004.

Before we start, why all those numbers after the pointe deachúlach?  My third reading group is now doing Caibidil a Sé Déag (“Tríd an gComhla Síos”).  It seems a little awkward to use 16/17 as a codán, so I decided to go with the leagan deachúlach, a bhuí leis an ríomhaire, which did the calculation i bhfaiteadh na súl (an Irish equivalent to “in a split second,” but not a translation of it).  In other words, I’m almost críochnaithe reading the book for the fourth time, once on my own and three times with small reading groups.

Also before we start, and for any one wanting some real basic Irish vocabulary related to Harry Potter, let’s look quickly at the word “órchloch” from the book’s title.  “Cloch” [klukh] is “stone” and “ór” is “gold,” pretty basic I guess.  Combined, they literally mean “gold-stone,” but it’s really translated as “philosopher’s stone,” as in the original title of the book in English (Harry Potter and the Philosopher’s Stone).  It always seemed to me that “cloch an ailceimiceora” would be more appropriate today than “cloch an fhealsúnaí” in this context, but “philosopher’s stone,” from the Latin, “lapis philosophorum” seems to have established the precedent for that terminology, I assume before the word “alchemist” ever came into existence.

And now, turning to the text, one of the most intriguing words in the English version is “bezoar,” which, as you may remember, Professor Snape asked Harry to define on their first day of classes.  Needless to say, theip air (ach bhí an freagra ag Hermione, ar ndóigh).  Tagann an focal Béarla “bezoar” ó na teangacha Peirsise agus Araibise, “bāzahr” agus “pādzahr” faoi seach.  Ciallaíonn sé “frithnimh” (counterpoison).   The name comes from the belief that a bezoar has healing powers, a bezoar being a calcified accretion that can grow in the stomachs of certain animals.

Irish apparently has two choices for “bezoar.”   We see one in Nic Mhaoláin’s translation, “bundallán draíochta,” lit. “magic stopper (i.e. a magic plug)” or “magic bung.”  The latter, I must admit, as a literal translation, doesn’t have quite the je ne sais quoi of the mysterious-looking word “bezoar” (how many had to look that one up when the book first came out?) or the straightforwardness of “magical stopper”.

The other choice is the gaelicization of the word “bezoar” itself, with minor changes to the vowels and the substitution of “s” for “z,” more typical in Irish spelling: beasór [BASS-ohrrr, that’s “bass” like the fish, not the musical instrument].   There doesn’t seem to be any special reason why Nic Mhaoláin chose “bundallán draíochta.”  Perhaps there are some relevant Irish folk traditions dating from before the word “bezoar” reached the Gaeltacht.  If anyone ever has the chance to meet her and find out, it would be great if you could write in and tell us.  At any rate, “beasór” is closer to the original Arabic and Persian.

A fun addition to this vocabulary, at least to ponder, is the Irish for “pseudobezoar,” for which, ní nach hionadh, I’ve found no precedents.  But since the Irish for “pseudo-” is usually “bréag-” (lit. false) and sometimes “súda-” (especially in math or computer science), we could easily enough come up with ” *bréagbheasór” or possibly ” *súdabheasór,” or a little more cumbersomely, ” *bréagbhundallán draíochta” or ” *súdabhundallán draíochta.”  Cad sa diabhal a chiallaíonn “pseudobezoar”?  It’s a bezoar created by deliberately inserting some indigestible object (rud dodhíleáite) into the córas díleá of the selected animal so that the object becomes a bezoar.

Well, anyway, that’s bezoar, but I’m still pondering “bezoardic” and “bezoartical.”  If we go with “beasór,” it would be easy enough to make it an adjective, although I’ve never seen an Irish version in use: *beasórach or perhaps *beasórúil.   But if we go with bundallán draíochta, we have to deal with using the phrase as an adjective, doable, but always, in my view, more complicated, like “leigheas bundallán draíochta” (a bezoardic cure) or “ealaíona leighis bundallán draíochta” (bezoartical healing arts).   Definitely “ar an leathimeall” (a bit off the beaten track), ach mar gach uile fhocal ina dhóigh féin, suimiúil go leor.

So , if bezoars crop up in your next Irish coffee klatch (whiskey-laced, b’fhéidir?) or ciorcal comhrá, now you’ll be prepared.  Or if you happen to run into Professor Snape, which now sadly would have to be through time travel for the character or for the late beloved actor, Alan Rickman.

Anyway, more interesting HP words to come, but perhaps intermittently, as the title of this blog suggests (sraith ócáideach, an occasional series)  — Róislín