How To Congratulate Someone in Irish: Comhghairdeas leat, a Katie, srl. Posted by róislín on Aug 9, 2012 in Irish Language 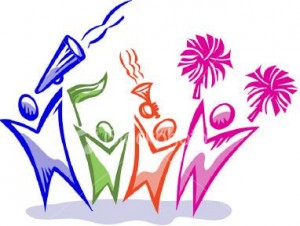 So what would you say if you met her?  Ar bhuail duine ar bith agaibh ariamh léi?  Before we actually work on “congratulations,” let’s look at that question.  The two typical answers would be “bhuail” (yes, lit. “met”) or “níor bhuail” (no, lit. “didn’t meet”).   Given that almost every verb in Irish can serve as a “yes” or “no” answer, we see “bhuail” [woo-il] used for these answers, since the question is in the past tense.

Remember that when you ask “Ar bhuail duine ar bith agaibh léi?” the word “léi” is critical, so the question means, “Did any of you ever meet her?”  If you just asked, “Ar bhuail duine ar bith agaibh í?,” it would mean “Did any of you ever hit her?”  And that would be a completely different situation, especially after bua Katie sa dornálaíocht.  Unless you were deliberately ag speáráil léi, I doubt you’d want to find yourself accidentally in a babhta with her due to a missing preposition.

If the conversation is directly with her, you might say:

Same deal as in the question above with the preposition “leat” in this sentence.  The word “leat” changes the meaning of “bualadh” from simply “hit” or “strike” to “meet.”   So if you said, “Ba mhaith liom thú a bhualadh, a Katie,” it would mean, “I’d like to hit you, Katie.”  What you probably would want to say instead is “Ba mhaith liom bualadh leat, a Katie” (I’d like to meet you, Katie).  That, of course, would assume that you weren’t actually talking to her in person, but that you were perhaps talking on the phone to set up a meeting.

Now let’s move on to the actual words for “congratulations.”  Of course, there are many other ways to praise someone, like “Bullaí fir!” (for a man, based on “fear,” when I’ve heard it) or “Maith thú!,” or “Maith an bhean!” or “Maith an fear!,” or “Mo ghraidhn  (or “ghraidhin“) go deo thú.”  But “congratulations” itself is either “comhghairdeas” [KOH- γarzh-djus] or, primarily in the North, “comhghairdeachas” [KOH-γardj-ukh-uss].  This is a combination of “comh-” (a prefix like “co-“) and “gairdeas” (joy, gladness).  “Gairdeas” has a variation “gairdeachas,” just like “comhghairdeas” has the variation “comhghairdeachas.”

The gamma sign /γ/ stands for our old friend from many a pronunciation blog in this series, the voiced velar fricative, as described in  https://blogs.transparent.com/irish/saying-i-love-you-in-irish/  and elsewhere.  You can search for the term in the bosca cuardaigh at https://blogs.transparent.com/irish/ to find other blogs where this was discussed.  If you use the northern variation, “comhghairdeachas,” you get to pronounce both the voiced and the voiceless velar fricative (the “ch” sound, routinely transcribed as “kh” in these blogs, sounding like the “ch” in German “Buch” or Welsh “bach“).  Nach ortsa atá an t-ádh — a dá fhuaim sin in aon fhocal amháin!

Neither of these two velar fricative sounds occur in standard English although the voiceless velar fricative (indicated by the “kh”) occurs in some speakers’ Lowland Scottish English, in words like “Loch” or “Och, aye” or “deoch an doris” (which technically should be “deoch an dorais” or “deoch an doruis,” but I’m not going to go head-to-head with the late Sir Harry Lauder over “caolú“).  I’ll mostly stick to the “comhghairdeas” version here, simply because it’s a bit shorter and more standard.

If you’re speaking directly to Katie, you could say “Comhghairdeas leat, a Katie!”

If you’re speaking about Katie, you could say, “Comhghairdeas le Katie!”

A few other related phrases are:

Déantar comhghairdeas leo, they are congratulated (lit. “congratulation” was made with them)

Rinneadh comhghairdeas leo, they were congratulated

Agus ba mhaith, but it looks like I’ll only be able to do it go hionadach (vicariously), tríd an mblag seo.  SGF, Róislín