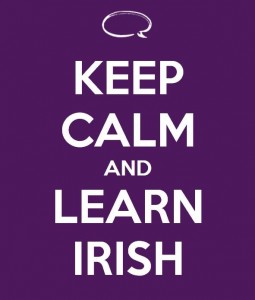 How many activities should we do while we keep calm?  Currently there are about 538,000,000 Google hits for the English phrase “Keep calm and …” (not limited to the “carry on” ending).

In this blog, we’ll just look at two “keep calm” phrases.  The first will be the translation of the original slogan (“Keep calm and carry on”).  The second will be for the new graphic on the Facebook page for Transparent Language’s Irish Blog, which says, “Keep calm and learn Irish.”  And that’s one of the best suggestions I’ve seen around for a while!

We’ll start with the phrase “keep calm.”  One of the first things we need to remember is that this is an idiom, it’s not “keep” like “storing,” “preserving,” or “putting in storage.” So I’d advocate “remain” or “stay” as the basis for the Irish translation.  And that’s “fan.”  Remember it’s pronounced like “fahn,” not like the English word “fan” as in cooling devices (gaothráin, feananna, srl.)

“Fan fút!” (Stay put, lit. stay or wait “under yourself,” which may sound a little extreme, but, no worries, this can be used for people who aren’t “freangálaithe.”  There are various other  similar phrases with “fút” where we don’t literally mean physically underneath something, e.g. cuir fút, srl.)

Another way you could say “Keep calm” is “Tóg go bog é” (lit. “Take it easy”) but I think “Fan socair” fits the flow of the “Keep calm” series.  And it’s fewer words!

There are various ways to translate the English word “calm” into Irish:

So far, I don’t know any exact Irish for “chillaxed” (ábhar blag eile?), which could be the latest word for “calm,” (i mBéarla).

As for “carry on,” this is a figurative expression, since we’re not physically carrying (iompar) anything anywhere.   “Carry on” here is in the sense of “proceed” or “continue what you’re doing,” a usage which, btw, isn’t that typical in the U.S.  There are several typical phrases for this, including:

lean ort, lit. continue “on” you

lean ar aghaidh [“aghaidh” sounds like English “I” or “eye”], proceed, lit. continue onward, even more literally, “continue on ahead” (in the direction you’re facing, either physically or task-wise)

So now we’ve done the standard KCACO.  How about “keep calm” with “and learn Irish” as we now seen on the Facebook page for our Irish Blog.

The basic word for “learn” is “foghlaim.”  The “g” is silent and the “o” is long, so it sounds like “FOH-lim.”  “Foghlaim” can be used as the command form, or to say “I am learning Irish” (or any other subject).

Foghlaim Gaeilge!  Learn Irish! (or one could say “Foghlaim an Ghaeilge,” with “an” for “the,” which is often used with the name of any language: Fraincis or An Fhraincis, Spáinnis or An Spáinnis, Navachóis or An Navachóis, srl.)

Bhuel, that’s for the phrase “learn Irish.”  As for the act or process of learning Irish itself, depending on who you talk to, it may be less a “piece o’ cake” and more like “Alasca Bácáilte” or “Croquembouche,” which were recently voted by Huffington Post as among the most difficult desserts in the world to make (http://www.huffingtonpost.com/2013/09/10/hardest-desserts_n_3894316.html).  Not that the Huffington Post used the phrase “Alasca Bácáilte,” as such, in Irish, but I figured, “Why not?” for this blog.  One more past participle learned (bácáilte, baked) is one more past participle learned.  And it’s always good to have a reminder that Irish doesn’t traditionally have the letter “k,” so a “k” sound usually appears as “c,” (as in “Alasca”).   If you’re intrigued by “k-lessness,” (and hey, no Klingon pun intended there) — féach an nóta thíos.

So put it all together and you have:

Fan socair agus foghlaim Gaeilge!  Which I would heartily recommend!

And if you’d like to say it to a group of people (or even “beirt,” two people, together):

Of course, there’s yet another possibility (there always is!):

Fan socair agus bí ag foghlaim Gaeilge! Keep calm and Learn Irish!, lit. “be learning Irish.”  This would be said to one person.  The “be” command is not, perhaps, the most typical type of phrase in English, but it’s quite common in Irish.

And finally, all this emphasis on keeping calm is great, but what if we really are excited (corraithe), upset (buartha), rattled (trí chéile), frantic (le báiní), frazzled (? – do bharúil?), on tenterhooks (ar bís), on edge (ar bior), having a conniption or otherwise discumbobulated (Gaeilge ar bith ar an dá cheann dheireanacha, is dócha)?  Ábhar blag eile, b’fhéidir.  SGF – Róislín