Orduimhreacha i nGaeilge: Ordinal Numbers in Irish Posted by róislín on Jul 12, 2018 in Irish Language 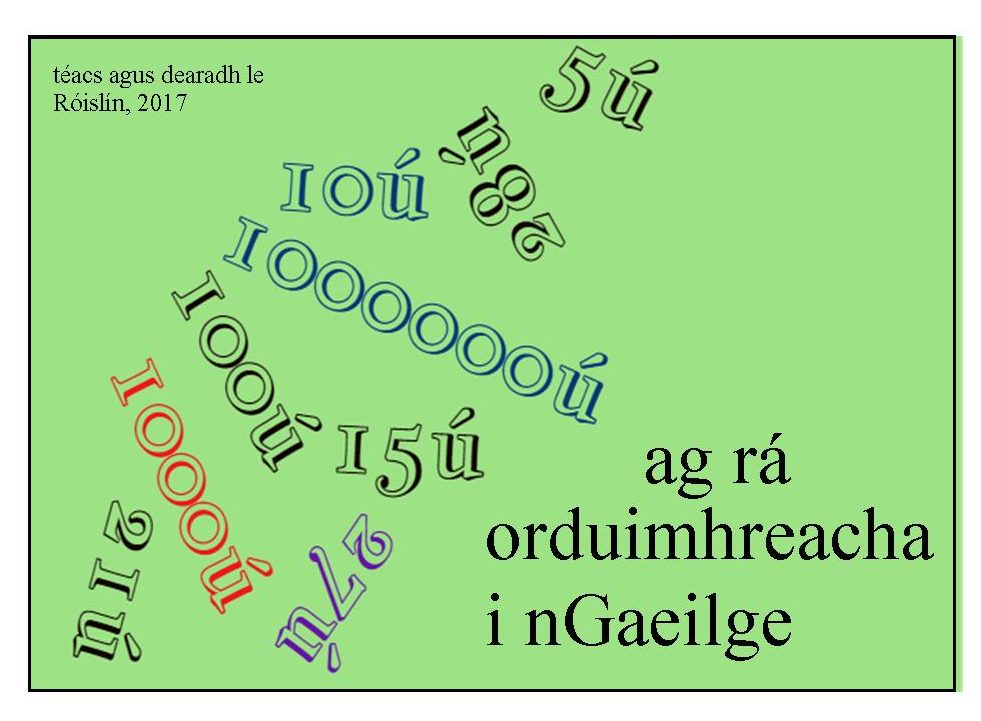 One, two, three vs. first, second, third.  A haon, a dó, a trí vs. an chéad, an dara / an dóú, an tríú.  Ever notice how in both English and Irish, the word for “first” is totally different from the word for “one” (one/first, aon or haon but céad or chéad)?  Learners of English also have to contend with the weirdness of “second” vs. “two,” but learners of Irish get a bit of a leg up, since “second” in Irish is based either loosely (dara) or closely (dóú) on the number “two” (dó, sometimes dá or dhá).  For “third,” English simply uses a different ending (-rd) than most ordinal numbers have (-th) but Irish becomes completely regular, saying “tríú,” which adds the usual “-ú” ending to the number three (trí).

So once we get past “first” and “second” in Irish, it’s pretty clear sailing.  But that doesn’t means it’s necessarily easy to think of what form of the number to use on the spot.  Plus our old friends lenition (séimhiú) and eclipsis (urú) may come into play (ar an gcéad dul síos, ar an chéad dul síos).  So what’s the “eochair“? Cleachtadh, cleachtadh, cleachtadh.

We’ve looked at various ways to say numbers in Irish in this blog over the years, but for the remainder of this blogpost, we’ll practice (déanfaidh muid cleachtadh ar) the orduimhreacha.  Some examples will be recycled from previous posts, especially one pertaining to July 2018, and others will be new here.  One blogpost can’t possibly address all of these numbers or variations, but hopefully we’ll at least make a dent in the issue.

an chéad, the first, as in “an chéad duine,” the first person

an dara / an dóú, the second, as in “an dara leabhar / an dóú leabhar,” the .second book

an tríú, the third, as in “an tríú garda“, the third garda or policemen.  Dála an scéil, teideal leabhair é sin i mBéarla: The Third Policeman.  An bhfuil sé léite agat? To jog your memory, it was featured on ABC’s Lost, which apparently put a nice spike in sales of the book.

an cúigiú, as in “an cúigiú roth,” the fifth wheel

an séú, the sixth.  In theory, we could say, “an séú céadfa” (the sixth sense), but this single Irish word “fios” (knowledge) can also suffice here.  Just to add to the mix, “fios” as the “sixth-sense” can also be translated as “second-sight.”

an seachtú, the seventh, as in “an seachtú lá den tseachtain,” the seventh day of the week

an t-ochtú, the eighth, as in “an t-ochtú bean,” the eighth woman, showing that the “t-” here is not gender-bound, as it is when there is no “orduimhir” (ordinal number).

an naoú, the ninth, as in “an naoú tonn,” the ninth wave

an deichiú, as in “an deichiú duine sa líne,” the tenth person in (the) line

For ordinal numbers in the teens and higher, the item being counted comes in the middle of the phrase.  And note that “déag” is used for “teen,” while “deich” is used for the actual number “ten.”

For saying numbers in the twenties out loud, note that the lower number comes first, with the item being counted coming next, and with the “twenty” part (fiche) coming last.  So we have some fun examples talking about upcoming eclipses visible in Ireland, one in July 2018 and one for two dates in 2019:

an t-aonú  ____  is fiche, as in “an t-aonú lá is fiche,” lit. “the first day and twenty.”  This structure is very useful for saying dates out loud, as in “Beidh lánurú na gealaí le feiceáil in Éirinn ar an aonú lá is fiche de mhí Eanáir sa bhliain 2019.”

And for good measure, a few more, which go back to single-word numbers:

Maybe one reason the numbers confound us so much is that we have instant recognition of the digits themselves but our brains can’t always think of the actual words for them quite as quickly.  The good news, though, is that it all gets better with practice.  Still just the tip of the numerical iceberg but I hope it’s been a useful sample.  SGF – Róislín