The Irish for Halloween and for November: Using Samhain, Samhna, Shamhna, srl. Posted by róislín on Oct 31, 2018 in Irish Language 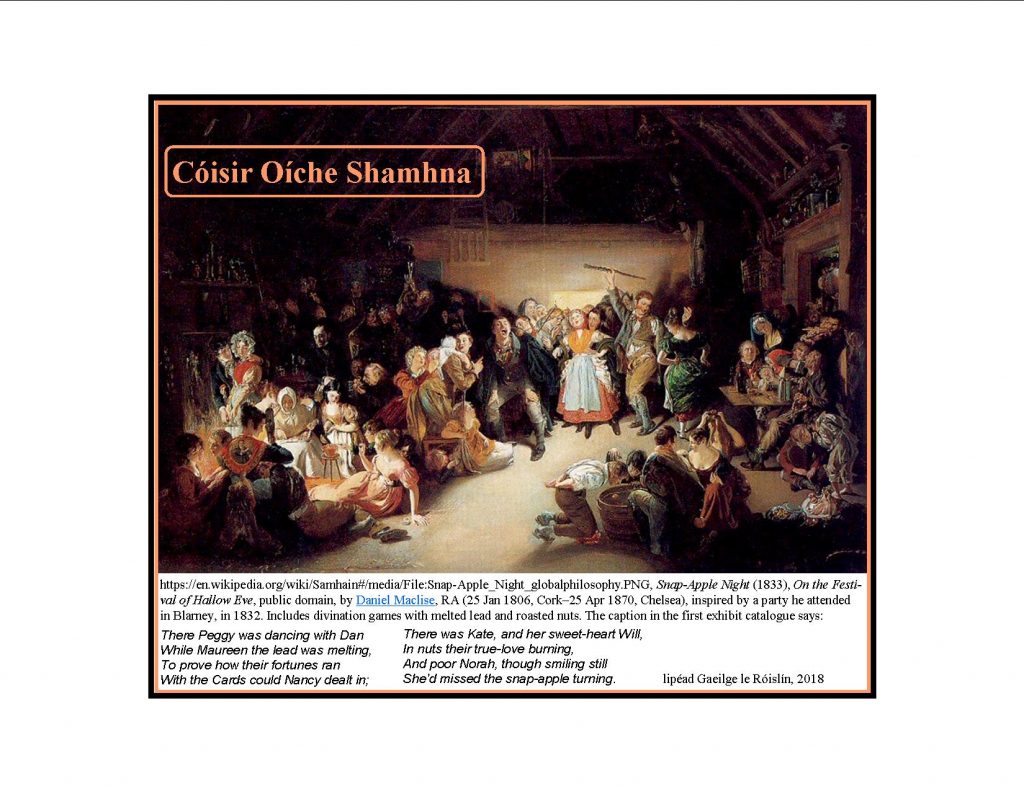 Our Halloween topics in this blog series have ranged from tornapaí to cultacha (naisc thíos).  Today we’ll focus on the actual word “Samhain” and why it changes to other forms like “Shamhna” in the phrase “Oíche Shamhna” (Halloween, lit. Eve of Samhain) or “Samhna” in “mí na Samhna” (November, month of November).

But before we plunge into how to use and pronounce Samhain, Shamhna, Samhna, etc., let’s briefly consider some of the fun aspects of this holiday, as we seen in the illustration above (Daniel Maclise’s 1833 painting “Snap-Apple Night”).  Three of the most visible ones are music (ceol), dancing (damhsa OR rince), and bobbing for apples (áladh ar úlla).

There are a few other customs that are a little harder to see in the picture but which reflect the supernatural aspect of the liminal period when the Old Year ends and the New Year (Samhain) begins, specifically several divination customs.  One involves dropping molten lead into water and interpreting the shape it hardens into (much as one interprets tea leaves in the bottom of the cup or the shape created by dropped apple parings, and, further back in time, for the ancient Romans, the shape of the entrails of birds specially killed for the purpose).  That latter one is “beagán gráiniúil” IMO, but it does have a fancy Latin-based name, haruspication.   I believe that “Maureen,”as referred to in the picture’s caption,  is the woman sitting by the three-legged stool with a container on it, presumably holding the water to harden the lead.

Near ” Maureen” is the fireplace where the roasted nuts (cnónna rósta) would be used for another type of divination.  Each nut would be named, and since I’ve mostly heard of this divination custom being practiced by young women, the names were of young men in the community.  The young woman would see which roasting nut would burst open first — that would be the man she’d marry.  So if the “Kate” named in the caption for the picture had named one nut “Will,” and it opened first, the two sweethearts would marry.  Hmm, “Kate”?  “Will”? Some romance and then a marriage — that sounds pretty familiar.  Comhtharlú, is dócha (coincidence, I suppose).

And now, to look at the words for November and Halloween themselves.  “Samhain” is November 1st, the ancient Celtic New Year.  The pronunciation is approximately like “SOW-in” or “SOW-en” with the “sow” sounding similar to “how” or “now” (that is, not like “to sow seeds”).  Unfortunately, the spelling of English is so erratic that almost every attempt to describe a sound requires some qualification.  For those who read IPA (the International Phonetic Alphabet), some possible transcriptions are /ˈsaʊ.wɛn/ and /ˈsaʊ.wɪn/.  Some speakers may reduce the “w” aspect so it’s barely perceptible, more like English “sound” but without the final “d.”  For a little etymological background on this word, please see the note below.

Anyway, if “Samhain” is November 1st, the Celtic New Year, why does the word sometimes appear as “Shamhna” (Oíche Shamhna) or “Samhna” (mí na Samhna)?  The answer is “an tuiseal ginideach” (the genitive case), which is used when you want to indicate that one thing is “of” another, as in “eve of Samhain.”  In English, of course, the word wouldn’t change after “of” (“boy” stays “boy” in the phrase “the book of the boy”), but in some other languages (like Latin and German and Irish), there is a change.  “Samhain” is grammatically irregular, so its pattern doesn’t form a major category in Irish; it’s pretty much unique unto itself.  To say “of Samhain,” we drop the “-ai”, push the “n” right up against the “h,” and add another “a” at the end (Samhna).

So far, that gives us “Samhna,” and that is the form of the word that we see in phrases such as “mí na Samhna” (November, lit. month of Samhain).

But how about “Shamhna” as in “Oíche Shamhna” and related phrases like “culaith Oíche Shamhna” (Halloween costume) and “candaí Oíche Shamhna” (Halloween candy)?  With this spelling, we now have “Sh” at the beginning and only the “h” is pronounced.   Warning – more grammar ahead!  The word “oíche” (night, eve of a holiday) is grammatically feminine so typically words describing it take the process called “séimhiú” (lenition, lit. “softening”).  Additional examples are “Oíche mhaith!” (Good night!, from “maith,” good) or “Oíche Dhéardaoin” (Thursday night, from “Déardaoin,” Thursday).

Now we have seen three forms of the same word (Samhain, Samhna, Shamhna).  There are two more in the singular, “an tSamhain” and “Shamhain.” “An tSamhain” is for saying “the Samhain,” which we may do in Irish, even if we don’t typically use “the” with “Samhain” in English.  Several other Irish words for holidays include “the” at the beginning (An Nollaig, lit. “the Christmas;” An Cháisc, lit. “the Easter”); “Samhain” behaves similarly.  In the case of “An tSamhain,” the “S” is silent and only the “t” is pronounced [un TOW-in, and that’s “ow” like “how” and “now,” not like “tow” as in “tow-truck” or “tow-headed].  The other variations in pronunciation also use the “t” and keep the “s” silent [un TOW-en, un town, etc.].  Among the uses of the form “an tSamhain,” we could have a sentence like “Is í an tSamhain an chéad lá de mhí na Samhna” ((The)) Samhain is the first day of November) or a phrase like “Ó bhí an tSamhain ann … (Since November 1st …).

Additionally, we have “Shamhain,” not as common in my experience, but it could be used in phrases like “um Shamhain” or “faoi Shamhain,”  as in “um Shamhain agus um Bhealtaine.”   “Um” in Irish has a wide variety of meanings, including “at,” “about,” or “in,” when discussing time and holidays.  BTW, this “um” isn’t pronounced like the English “gum” or “tummy” or with the “u” in “to putt straight” (in golf).  It’s more like the “u” in “put” or the “oo” in “soot” or “book” (at least the typical American English pronunciations of the latter two).  “Faoi Shamhain,” similarly, means “at Samhain.”

There is actually a plural form for Samhain also, “Samhnacha,” but it my experience, it’s not used very often.   A quick look online doesn’t reveal any use of “Samhnacha” in a natural context, just in dictionary entries.  Similarly, words like “Nollaigí” or “Nollaigeacha” (Christmases) and “Cáisceanna” (Easters) aren’t that widely used either, but of those, Nollaigí/Nollaigeacha picks up at least a few hits in online searches for natural contexts, mostly nostalgic references to Christmases past.  There is also the occasional possibility of “Shamhnacha,” for example, after a preposition like “ar” (on, about) as in “ag smaoineamh ar Shamhnacha“.  Curiously, there is a place called “Samhnacha” in Co. Galway, (angl. “Sawnagh”).  Anybody know the background to this place name?   Speaking of place names, there is also a “Cnoc Samhna” and a “Cnoc na Samhna.”  Cúlra na logainmneacha sin ag duine ar bith?

So, there we have it, seven forms of the basic word (Samhain, Samhna, Shamhna, an tSamhain, Shamhain, Samhnacha, Shamhnacha).  I hope you found it useful for discussing “an séasúr seo.”  SGF — Róislín

Nóta faoi chúlra teangeolaíoch an fhocail “Samhain“: There are at least two possible etymologies for this word, and I first learned it as a term on its own, without any basic breakdown, unlike the English word “Halloween,” which breaks down quite neatly to “Hallow(s)” and “E’en/Evening.”  One theory says that the word “Samhain” is derived from Proto-Indo-European “*sam” (together).  Another theory suggests that it’s from Proto-Celtic *samo- (“summer”).  But as I said, there’s still no definitive answer to this linguistic mystery.  Whenever we start talking about Proto-Indo-European, we’re talking about language that predates actual writing or any written texts.  The asterisk before the sample words means that there are no written examples of the given samples; they are based on linguistic detective work, tracing words back to their earliest known forms and then applying formulas of language change to speculate about what the word might have been before we have any written records.

Glasra Oíche Shamhna (a Halloween vegetable), but what’s it called in Irish? Posted by róislín on Oct 24, 2017 in Irish Language (discusses the original vegetable used for “Jack O’Lanterns,” given that pumpkins are not native to Ireland and were not available to the ancient Irish who celebrated the original Samhain)