Well, as promised here is the third flag to be discussed as we address dathanna bratacha (colors of flags).   As you may have recently read, Cuid A was about Bratach na hÉireann and Cuid B was about Bratach na Stát Aontaithe (Bratach Mheiriceá), https://blogs.transparent.com/irish/tri-bhratach-eire-meiricea-an-bhreatain-bheag-agus-a-ndathanna-flag-colors-cuid-1/.  The colors we discussed were uaine (and the companion term “glas,”), bán, flannbhuí, gorm, and dearg.  The Welsh flag includes three of those colors, so this blog will, in a way, just be looking at those colors in a new light. 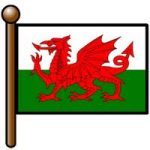 I decided to include the Welsh flag in this discussion because I    thought the presence of the color green would make for some  interesting food for thought.  Of course, dragain are also interesting to ponder, vexillogically and otherwise, but more from a dearcadh criptea-zó-eolaíoch.  Someday perhaps we’ll compare dragan bhratach na Breataine Bige with dragan bhratach na Bútaíne, since that’s the only other country which has a dragon on its national flag.  And it’s also, by many recent reckonings, the happiest country in the world.  Ach sin alt eile  Agus ní amháin mar gheall ar na dragain ach ceist eile — cén focal is fearr le cur ar “happiest” mar tá a lán roghanna ann do “happy”: áthasach, gliondrach, séanmhar, sona, srl., ach sin ábhar blag(anna) eile! 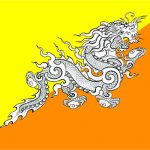 It’s easy enough to find the colors of the Welsh flag described in Welsh (coch, gwyn, gwyrdd), but the challenging bit here is finding them described in Irish.  So why not take the plunge?  It would actually be interesting to look at all the flags of the world, really, in terms of the color names used in the native language(s) of each country with a cur síos (description) in Irish.  Ach sin tionscadal an-mhór, nach ea?

So, maidir leis an mBreatain Bheag, we have:

1) the red of the dragon – “dearg” is a shoe-in, i mo bharúil féin, since this dragon isn’t “coppery red” and it certainly isn’t furry (see freagra B1 in the previous blog, if you’re wondering why I’m even postulating a furry dragon).   Bonus points if you can say “The Red Dragon” yn Gymraeg (in Welsh), keeping the grammatical gender of the word “dragon” in mind (Freagra C1).  Come to think of it, I’ve never actually thought about whether the actual dragon on the Welsh flag is fireann or baineann.  I do have a red plush souvenir one (with backpack straps), but somehow I don’t think that “draig” will answer ceist na hinscne.  Hmmm, anyone know?  (Gluaisín: baineann, female; fireann, male; inscne, gender)

2) As we’ve already seen above, the Welsh for “white,” as used in their flag and in general, is “gwyn” (feminine form: gwen, for when that’s needed).  So, since that’s fairly predictable, how about a slightly different ceist:  which Irish word for “white” is cognate to “gwyn” — bán, fionn, or geal?  (Freagra thíos, C2.)

3) And as for the green, well, first up, I’ll say that I have found no official description of the Welsh flag in Irish.  So the green-green situation becomes a question again.  If we model the usage on the Irish flag, we’ll use “uaine” for the Welsh “gwyrdd.”   If we model it on the most typical entry for “green” in various color lists, it would be “glas.”  Curiously, “glas,” which basically means “green-blue-gray” in the Pan-Celtic spectrum, actually means “blue” in Welsh.  The Welsh word for “green” (gwyrdd/gwerdd) is cognate to Latin “viridis,” from which we also get “vert,” “verde,”  and the surname Verdi.  Speaking of “Verdi,” I read some place that the majestic-sounding name “Giuseppe Verdi” simply means “Joe Green,” which wouldn’t imbue the 19th-century opera composer with quite the same élan.  C’est la vie, I suppose.  Also related to Latin “viridis” are English words like “verdigris” and “verderer,” but not their Irish equivalents, which are “glasar” and “maor coille” (lit. warden of woods, i.e. wood-ranger).   Actually there are two additional words for “verdigris” in Irish.  They’re interesting because they’re based on the word for copper, but they aren’t connected to the viridis-verde-Verdi family.  An bhfuil siad agat?  Muna bhfuil, tá an freagra (C3) thíos.

To conclude, I’ll propose “uaine” for the green of the Welsh flag (Bratach na Breataine Bige), since “uaine” is generally reserved for things which are dyed or manufactured green, as opposed to things that are “glas” (naturally occurring in nature).   I don’t know if they’ve ever tackled the issue, but www.draigwerdd.org might be just the place to further this discussion.   As you might have picked out, the name of this Dublin-based Welsh organization, Draig Werdd, means “Green Dragon.”  Any other thoughts for this color term for the Welsh flag?  Breatnach ar bith ar an liosta?  SGF, Róislín

C.1. The Welsh for “An Dragan Dearg” is “Y Ddraig Goch.”  It’s grammatically feminine (baininscneach) in Welsh.  In Irish, as it happens, the word for dragon, “dragan” is grammatically masculine (firinscneach).   Thereby must hang some sort of tale!  (Note to self: next project, grammatical gender of dragons go hidirnáisiúnta, just for languages that have grammatical gender, of course — not all do).

Coincidentally, “dragan” is also the Irish word for “tarragon,” which is considered to be the “dragon herb” and which was believed to cure snake bites.  But the Welsh do not mix up their herbs with their “dreigiau” (that’s the Welsh plural, btw, one less word to learn for those strictly interested in Irish).   The Welsh for “tarragon” is either “taragon” (reasonably enough) or “amgwyn,” which appears to be from “cwyn” (complaint, lament, suit).  It would be interesting to know more about the word “amgwyn,” since I don’t exactly see the connection between the herb and complaining or lamenting, let alone between that and dragons.  But, ní luibheolaí mé, de hiarracht ar bith den tsamhlaíocht, so for now, sin é, but not quite before I at least note that “cwyn” must be related to Irish “caoineadh.”  That much, at least, is réasúnta soiléir.

C.2. “fionn” and “gwyn” are cognates, both derived from the Celtic root “vindo-s.”

C.3. Additional words for “verdigris” in Irish, besides “glasar,” are “umhaghuirim,” f (lit. copper-blue, in a slightly archaic spelling), and “meirg umha” (lit. rust of copper).  “Copper,” as you may have figured from that, is “umha,” but “caveataigí,” all ye miotalóirí, “umha” also means “copper alloy” or “bronze.”

Of course, we could just use the Pantone numbering system and be done with the whole green-green question: Pantone 348 U.  Nothing like a good set of digití when na focail iad féin are a little éiginnte or neamhiata.  Somehow, I think Spock would like that!

Gluaisín do C3: caveataigi, a new hybrid combining Latin and the usual plural ending for commands (I know, “caveat” is by no means an Irish verb, but then “amachaigi” and “isteachaigi” allow verb endings even though “amach” and “isteach” are not verbs — just a little word play! ; digit [DIG-itch, not with a “soft” g like the English word “digit], digit; éiginnte, ambiguous; neamhiata, open-ended. lit. more like “non-closed,” based on the prefix “neamh-”  and the verb “iaigh,” close, shut, stop, dam, with the additional forms “iamh,” to close/shut/stop/dam,  and “iata,” closed, shut, secured, fastened, and last but not least, constipated)