In Part 1, I wrote about the circumstances that gave rise to the world famous Vespa motor scooter. Today we’re going to look at her big sister, l’Ape.

We saw the Ape in action in our recent blog, Italy’s Smallest Library, and I’m sure that if you’ve visited Il Bel Paese (Italia!) you’ll be familiar with its unique look … and sound. How many of you have wished for an enormous fly swatter to quiet the Ape’s raucous ronzio (buzzing) in the narrow streets beneath your hotel window!?!

L’Ape, commonly referred to as il motocarro, was designed to fill the post war lacuna for a practical and affordable commercial vehicle, a furgoncino (little truck, or van) with a small economical motor and three wheels. In its first incarnation, it was nothing more than a Vespa with a rimorchio (trailer) attached to it. This configuration was sometimes referred to as the VespaCar, or TriVespa.
Later, a cab with doors on each side was added to provide the driver with protection from the elements. Have you ever peered into the cab of an Ape? If so, you may have been surprised to noticed that it’s not furnished with uno sterzo (a steering wheel), but un manubrio (handlebars), just like its little sister. This makes for an ‘intimate’ experience if you have a passenger! 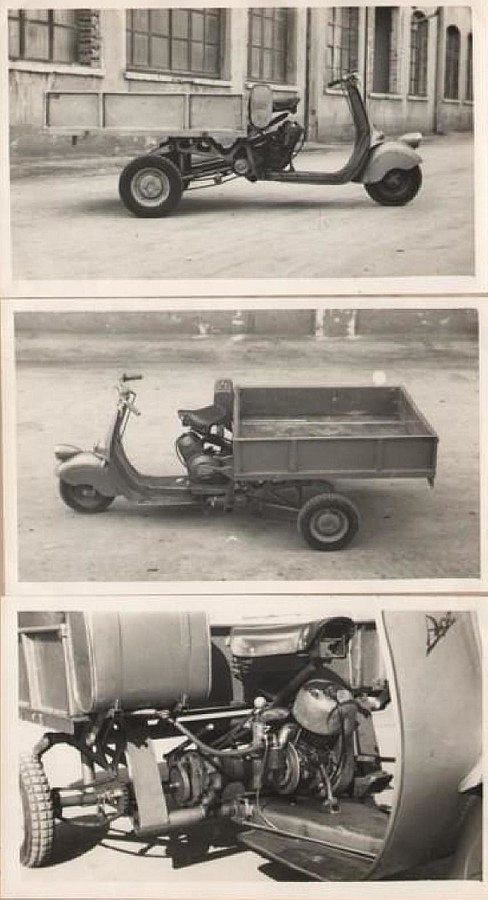 The birth of l’Ape, basically a Vespa with a trailer. Image: Public Domain

Despite huge developments in road transportation since its inception the little Ape is still very much with us today. It’s now been in continuous production for over 70 years, and although it has passed through many mutations its basic configuration has remained the same. You can find more details and photos of its lineage HERE 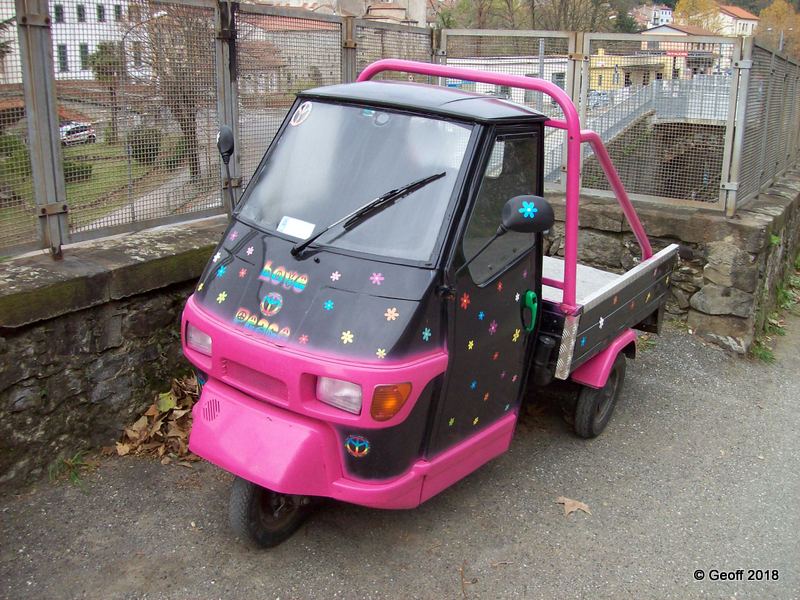 Far out man! One of our favourite Apes here in Pontremoli. 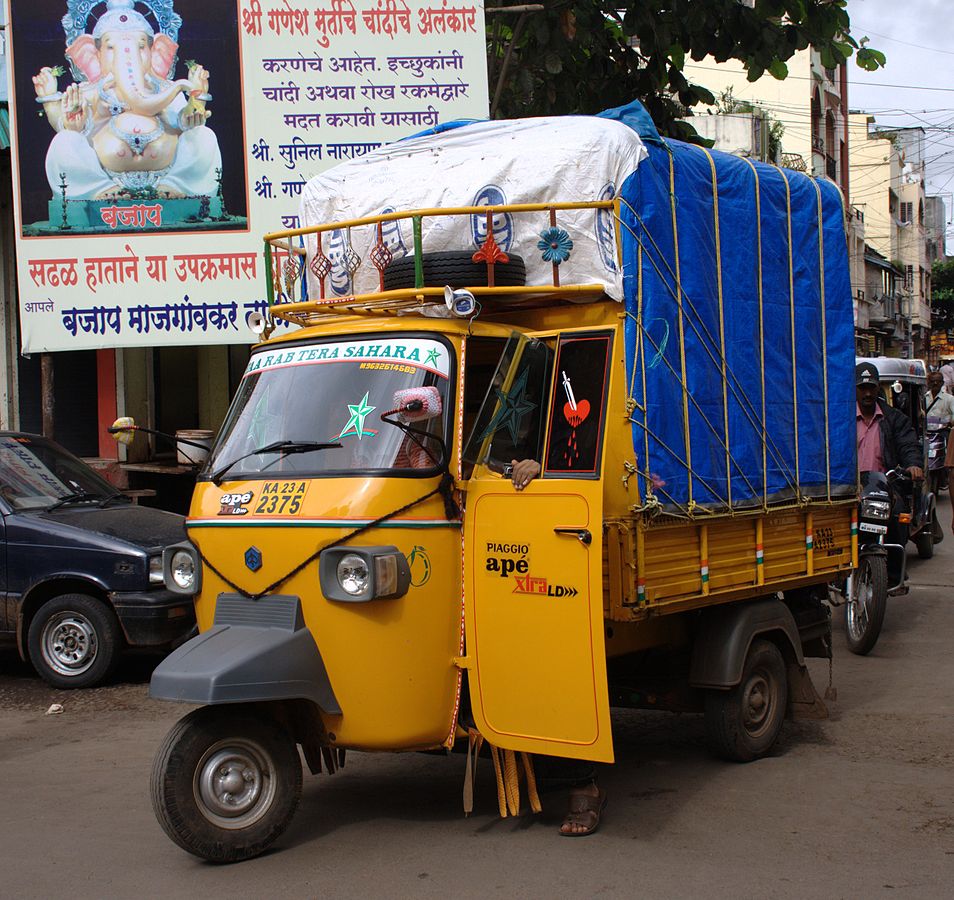 Piaggio also have an important plant in India, where the Ape has had huge success. One of its many uses is as a motorised rickshaw. Photo: Creative Commons.

Although originally designed for use in busy towns and cities, l’Ape has also become vital to rural life in Italy. Here in Lunigiana it’s perfectly suited to the narrow medieval streets which were originally only intended to be used by people and animals. Due to the narrow width of the strada comunale where we live, for example, we have to leave our car down in il parcheggio (the car park) at the beginning of the village and carry our things another couple of hundred metres to our house. An Ape, however, has no problem traversing the entire village, and is perfect for carrying heavy items such as animal feed, fuel for the stove and so on. Purtroppo, not having an Ape, we have to content ourselves with la carriola (the wheelbarrow) … but it keeps us fit and youthful! 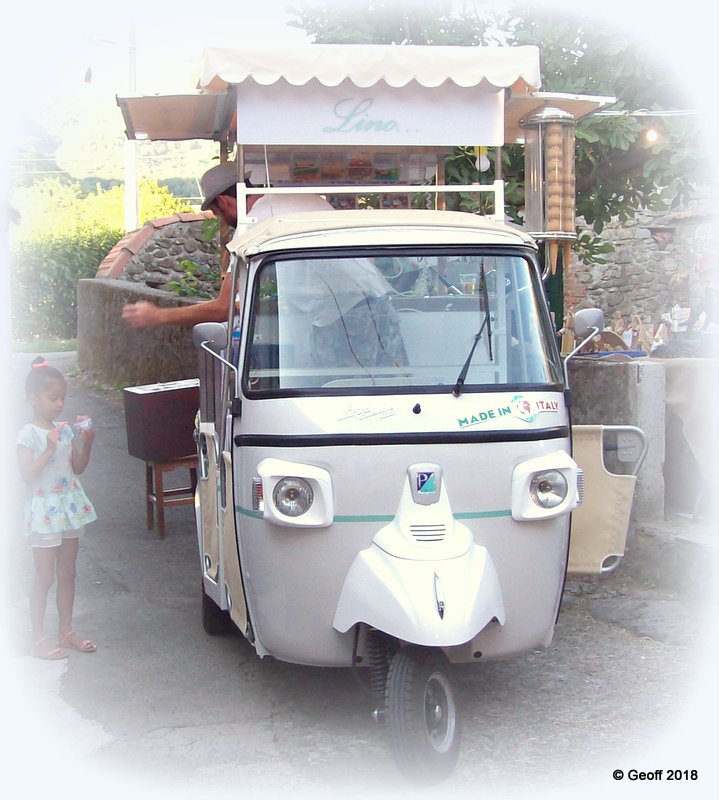 Bringing fresh home made ice cream into the heart of the village in August. Lino converted his motocarro into an Ape-gelateria.

Now sit back and enjoy some insane Ape racing!!!

What do you think of l’Ape? Please share your thoughts on this classic Italian mezzo di trasporto.