An Italian Painting for Easter Posted by Serena on Mar 25, 2016 in Uncategorized

There is a hidden jewel in the Pinacoteca e Museo Civico in the small Tuscan town of Volterra: La Deposizione dalla Croce (The Deposition from the Cross) by Rosso Fiorentino. 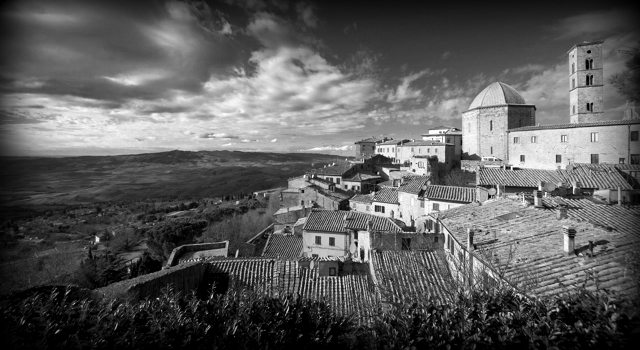 Giovan Battista di Jacopo (1494-1540), known as il Rosso Fiorentino (the Red-haired Florentine), was one of the most famous artist of 16th century Tuscan Mannerism. La Deposizione di Volterra, painted in 1521, is considered to be his masterpiece.

I remember seeing this wonderful altarpiece many years ago when I went on a study trip to Volterra with my professor of Etruscan Archaeology. After having done the obligatory tour of the archaeological site and museum with my professor, I decided to pay a personal visit to the Pinacoteca. I was really curious to see Rosso Fiorentino’s Deposizione. Whilst studying art at school, I had been struck by the reproductions of his works of art in my textbook, and enthused by the explanations my art teacher had given of his paintings. Now I finally had the opportunity to see one for real!

I wasn’t let down. The painting was even better than I had expected, and I stood there in awe for a long time, looking from one figure to another, trying to take it all in. It struck me that sorrow and panic are the themes that dominate this big painting.

But what is so amazing about La Deposizione dalla Croce?
An agitated dynamism, strikingly symbolic colours, and an almost surreal composition make it seem incredibly modern. The angularity and jaggedness created by the graphic lines of the ladders and the cross are echoed by the geometry of the characters’ limbs, while the clothes seem unnaturally inflated, echoing the curve of the altarpiece. It’s hard to believe that this was painted nearly 500 years ago!

The figures at the top of the painting are positioned like frenzied acrobats in sharp contrast to the static group of the mourners at the bottom, who are united by the tragic red diagonal of the figure of La Maddalena who throws herself at La Madonna’s feet.

Notably lacking is the ubiquitous landscape of the traditional Renaissance painting, the background being dominated by the graduated blue tint of the sky makes it look rather like a contemporary mural.

In fact, the colours, with their big bold areas of chiaroscuro, are more akin to those used by the 20th century expressionists. Look, for example, at the unnatural colouring of Jesus’ body, a sickly green, or the bearded man standing on the ladder to the left: is his skin orange or is he wearing a leotard over his legs and arms? (Did they even have Lycra at that time?)

The faces of the distraught mourners resemble masks from a Greek tragedy. To the right, a weeping red headed figure turns his back to the tragic scene. This is believed to be an unconventional self portrait of the artist.

But these are just words and memories. If you want to experience the full power of this exceptional altarpiece there’s only one option. A trip to Volterra.