Yesterday my husband and I took my parents to il Passo dei Due Santi (the Pass of the Two Saints) in the Appennino Tosco- Emiliano, located about 10 km west of Pontremoli a volo d’uccello (as the crow flies). The pass lies on the border between the regions of Toscana in the south and Emilia Romagna in the north, but in the 19th century, before the unification of Italy, this was the dividing line between two independent states: il Granducato di Toscana e il Ducato di Parma. This border was once delineated by a series of small standing stones, two of which are still in position in the middle of the pass. These rectangular upright blocks with a curved top, are about 70 cm high, and are engraved on the south face with the letter T (standing for Toscana) capped by a crown, while on the north face the crown is accompanied by the word Parma. On the sides of these stones, the date 1828 is still visible.

Il Passo dei Due Santi is situated at 1398 meters above sea level, in an area known as Zeri in northern Tuscany, and is the location of una stazione sciistica (a ski resort) called Zum Zeri. This is not a famous or fashionable stazione sciistica, but it’s the only one in the Pontremoli area, and in the winter they organize skiing courses. I wonder if I will ever find the courage to put a pair of skies on one day! The resort is very basic, just a rifugio/albergo, a restaurant with a bar, and one shop selling trekking gear, all spread around a big car park, but la vista è incredibile! (the view is incredible!)

To the south the sharp peaks of the Alpi Apuane jut up from the horizon like the teeth of a gigantic saw, and if you look carefully you can just make out the white patches of Carrara marble exposed by the quarries. To their right, looking toward Pisa and Livorno, can be seen the white curve of the coastline and the Mare Tirreno (Tyrrhenian Sea). Further to the west, obscuring il Golfo dei Poeti (the Gulf of the Poets) lies the headland of il Parco di Monte Marcello which flanks la Bocca di Magra (the mouth of the river Magra). Framed between this headland and the Ligurian mountains to the west you get another glimpse of the sea, and suspended in the mist of the far away horizon, almost floating in the sky, si staglia la sagoma di un’isola (the silhouette of an island stands out). 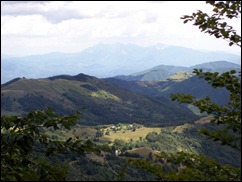 We were attracted to il Passo dei Due Santi by a concert given by the local coro degli Alpini (Alpini choir). Gli Alpini are a military mountaineering corps famous, aside from their outstanding military service, for their male voice choirs. They sing musica ‘a cappella’, that is, without the accompaniment of musical instruments. We all enjoyed the concert, particularly my father, who used to have an old record of canti degli Alpini (Alpini songs).

After the concert the Alpini and their families went to have lunch at the restaurant, while we sat in the shade of the beech woods just behind la cappella della Madonna della Neve (the chapel of the Madonna of the snow) to have our pranzo al sacco (picnic – literally: lunch in a bag). We got out the two foldable chairs which we had brought along for my parents, then me and Geoff found a convenient log to sit on. We ate our panini al formaggio e pomodoro (cheese and tomato sandwiches) whilst enjoying the fresh breeze and the limpid blue sky. Other people around us were better  organized: they had proper folding tables and chairs, sun loungers, bottles of wine, water and soft drinks, dishes of pasta salad, salame and prosciutto, e tanto altro (and much more), these were serious Italian picnickers! After lunch a nearby party of four set up a little table and started playing cards, while the children inside the bar played calcio balilla (table football).

In the next blog I’ll be writing in a bit more in detail about the Alpini.