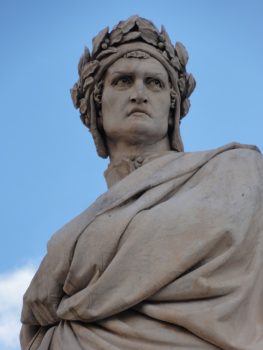 Last year the Italian government named March 25 as National Dante Day in anticipation of the 700th anniversary of his death, which occurred in 1321 while he was exiled in Ravenna.

Dante Alighieri is considered the “Father of the Italian Language” since he wrote his epic poems known as the ‘Divina Commedia‘ in his native Florentine dialect as opposed to Latin, which was standard at the time. The Divine Comedy, arguably the most famous work of Italian literature, è il secondo libro più tradotto al mondo dopo la Bibbia (is the second most translated book after the Bible!) It formed the base of the Italian language and solidified it to a status that one day would replace Latin entirely.

March 25 was chosen as Dantedì because Dante supposedly began his descent into Hell on 25 March 1300, beginning his poem by writing:

“Midway upon the journey of our life,

I found myself within a dark forest,

For the straightforward path had been lost.”

Dantedì will be full of digital events through readings and initiatives dedicated to the Supreme Poet with the official hashtags #Dantedì and #IoleggoDante, both on March 25 as well as throughout the year. There are planned exhibitions in Ravenna, Verona, Parma, Bologna, and Florence, as well as many more, in reverence and celebration to this Italian icon.

All in all, over 100 events have been planned across Italy to celebrate L’Anno di Dante (The Year of Dante) and they can be explored more in detail on the Dante700 website: https://dantesettecento.beniculturali.it/ Some of them are online because of the circumstances, so take advantage!

Earlier today, award winning actor and filmmaker Roberto Benigni read Canto XXV from Paradiso in Dante’s epic masterpiece The Divine Comedy at the Quirinal Palace in Rome- and it was televised live on RAI. Here is a video of Benigni reading Canto I as well as a translation:

Here is another video underlying 12 curiosities of the Somm0 Poeta1supreme poet:

So thank you Dante, for your amazing works of poetry that have given us the Italian language and so many reasons to celebrate this year, 700 years after your death. One last pensiero 2thought of Dante to conclude:

“Consider your origins: you were not made to live as brutes but to follow virtue and knowledge.”