In Italian we say: ‘Natale con i tuoi, Pasqua con chi vuoi’ (Christmas with your family, Easter with whoever you like). Nevertheless, Domenica di Pasqua (Easter Sunday) is usually spent with the family, engaged in the traditional act of stuffing oneself with food, and then regretting it …

Traditional Easter fare consists of dishes such agnello o capretto arrosto (roast lamb or kid), uova sode (hard boiled eggs), which have been taken to church to be blessed at the end of the Mass, and, of course, the obligatory uova di cioccolata (chocolate eggs). 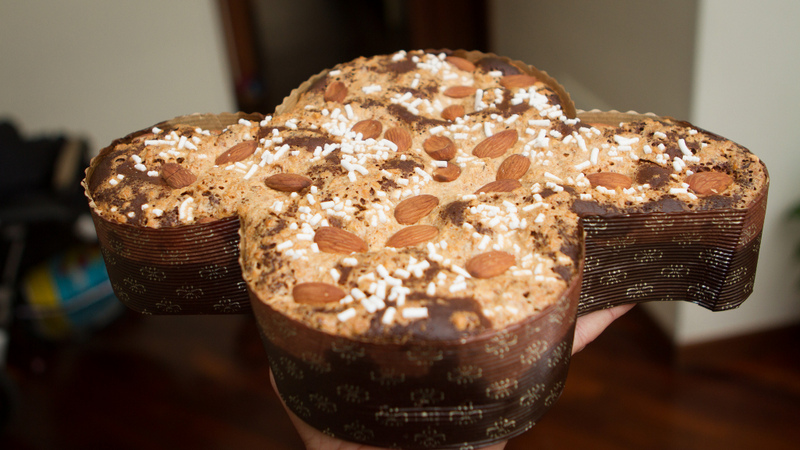 The traditional Easter cake is la Colomba (the Dove), which is similar in flavor and consistency to the omnipresent Panettone (the Italian Christmas cake), but baked in the form of a stylized dove. Although la Colomba is the most popular Italian Easter cake, from a historical point of view it isn’t actually that old as it was only created at the beginning of the 20th century by Motta, an Italian sweets and ice-cream company founded in Milano in 1919. When Motta created their Easter cake they chose to base its form on one of the most famous symbols of Easter, the dove of peace.

Domenica di Pasqua is followed by Lunedì di Pasqua (Easter Monday), better known as Pasquetta (Little Easter) or Lunedì dell’Angelo (Monday of the Angel). This latter name refers to the angel who is said to have greeted the women at Jesus’ tomb with the news that he had been resurrected. 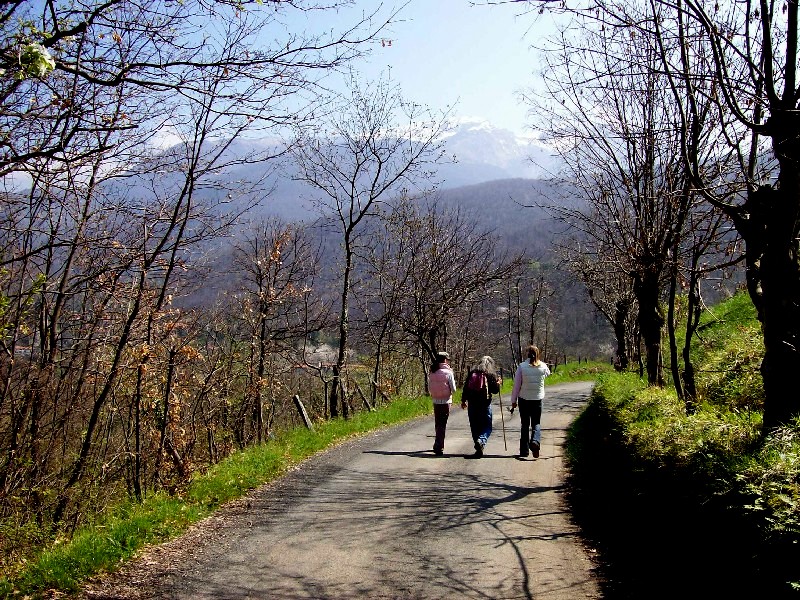 Una gita fuori porta. My sister and her daughter walk with Serena near our home in Valdantena.

La Pasquetta is probably the most popular aspect of Easter for most Italians, and the traditional way to spend it is with ‘una gita fuori porta’ (literally: a trip outside the town gates), usually incorporating a picnic with friends. One interpretation of this tradition comes from a Gospel story which tells that, on the day of his resurrection, Jesus appeared to two disciples who were travelling to Emmaus a few kilometres outside the city gates of Jerusalem. The gita fuori porta tradition could, therefore, be seen as a kind of ‘re-enactment’ of this story, although, like so many old traditions, most people won’t really be aware of its origins.

A friend of mine who is originally from a town south of Naples told me that in her area the traditional gita fuori porta was a pilgrimage to a local monastery or Sanctuary. In my home town of Lucca, on the other hand, many people spent Pasquetta by going for a picnic along the banks of the river Serchio which passes Lucca on its journey from the Apuan Alps to the Mediterranean near Pisa.

During Pasquetta, many small historical towns hold events such as antique or craft markets, vintage car rallies, and so on, which will be packed with tourists. I remember many years ago going for a tour in the Chianti area near Siena with some friends from University. We were hoping to go to San Gimignano, a small walled town famous for its many medieval towers, but we couldn’t even get near it due to the heaving masses of tourists and consequent traffic jams. We ended up going to Monteriggioni instead, another beautiful but less know (30 years ago!) walled town, and from there to visit a friend of ours whose family owned a Medici style villa on the top of a nearby hill.

Whatever we want to do for Pasquetta it’s the weather, of course, that has the final word. Naturally, we always hope for a beautiful warm sunny day. Teniamo le dita incrociate!