From Sestri To Punta Manara – Part 2 Posted by Geoff on Dec 29, 2017 in Uncategorized

It’s cosy in the little bar looking out over la Baia Del Silenzio, and the cappuccino is hot and creamy, just right! We’ve forgiven Claudio, who suggested that we came here (see part 1), and are ready for a good walk up the rocky hillside that beckons from the other side of the bay.

If you haven’t already seen it, you can read part 1 HERE

The centro storico is so pretty that we end up missing the footpath. We’re too distracted by the sights, sounds and smells … yes particularly the aromas that emanate from the pasticcerie, pizzerie and delicatessen, mouthwatering tentacles that the cunning negozianti have seen out into the street to captivate passers by.

But we have our panini, and we’re going to find a beautiful spot overlooking the sea for our picnic. We turn round, and there’s the arch described by the barman. A sign announces Sentiero a Punta Manara. Su, andiamo!

At the beginning, the climb is steep and enclosed by high stone walls on either side. We remove our gloves and unzip our jackets, it’s not that cold, maybe 12°C, certainly warmer than Pontremoli. But that’s how it is here, an area of micro-climates, and the climate on the Ligurian coast is perfect for the type of vegetation that we now find ourselves amongst as we break out of the walled trail onto a steep rocky hillside which plummets a hundred metres to the Mediterranean sea on our right.

La Macchia Mediterranea is a vegetation typical to this kind of coast. It’s a very distinctive mixture of flora which, in fact, only covers something like 2% of the worlds surface, as can be seen from the map below.

We find our picnic spot, a rocky outcrop facing out to sea. Slender fingers of sunlight poke through the broken cloud to paint the blue-grey seascape with patches of silver and gold, here and there a stain of azure or verdigris. Truly a mesmerising vision.

Mangiati i panini, we set off again along the trail and begin to pick out various types of flora typical of la macchia:

Il Leccio (Holm Oak), is a very slow growing evergreen tree that can live up to 1,000 years. Its wood, which is very solid, was once used to make wheels, and legend has it that Jesus’ cross was made of leccio. There’s a fantastic ancient contorted example beside the trail, it’s been there so long that an old boundary wall has literally been built around the massive trunk. 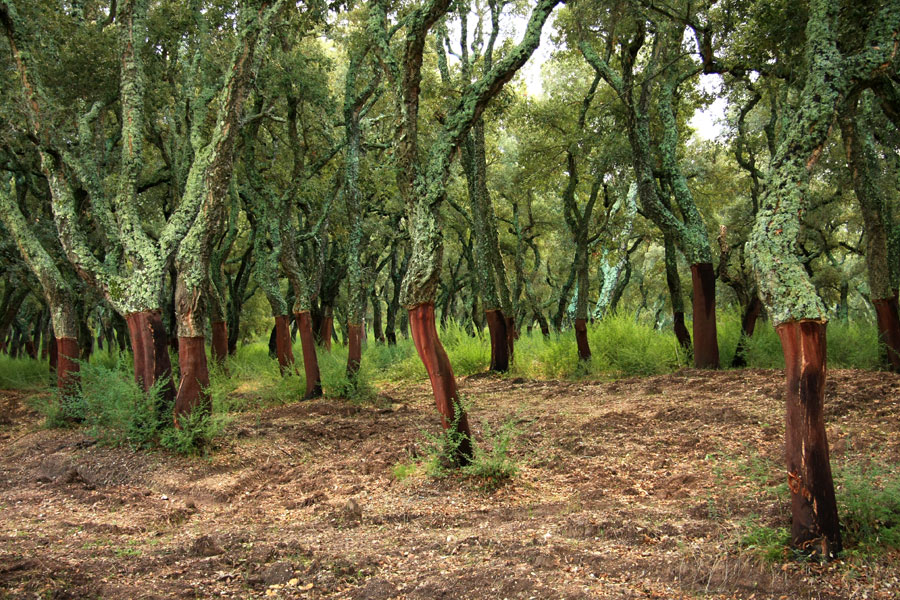 Have you ever wondered where those corks that you pull from your bottle of wine come from? Well, the name cork derives from the Latin word for oak: quercus. And further along the trail we enter a grove of querce da sughero (Cork Oaks). This variety of oak can live for around 250-300 years, although those used to produce cork only make it to about 150 years due to the negative effect of having their ‘trousers’ removed!
Well at least that’s the impression that I always have when I see a cork oak with its bark stripped up to the level of the boughs: a tree with no pants!
The first cork harvested from the tree is porous and irregular, and this is mashed up to make insulation which is used in construction work. But once the bark had grown back again, a second harvest produces a smoother cork destined for the use of bottling wine and preserves.

Now here’s a classic Pino marittimo (Maritime pine), which is extremely resistant to the salty sea air and grows well in sandy terrain. It’s often planted along the coastline to consolidate sand dunes, and produces an excellent resin, which is traditionally harvested to be distilled into turpentine.

There are plenty of colourful corbezzoli (Strawberry Trees). The corbezzolo is quite an unusual bush in that its strawberry like fruit matures between October and December, exactly a year after it flowers. This means that the bush always bears both the flowers and fruit at the same time of year. Verde, bianco e rosso, the colours of the corbezzolo, led to the adoption in the 1800’s of il corbezzolo as the symbol of il Risorgimento italiano: the green of the leaves, white of the flowers and red of the fruit representing the green, white and red of the Italian flag.

Another notable plant grows amongst the pines and oaks, the alloro (laurus nobilis = bay, or laurel tree). The alloro was held as a sacred plant by the ancient Greeks who associated it with the god Apollo of Delphi, symbol of knowledge and glory. A crown made from laurel was placed upon the heads of winners at the Delphic games. Great poets were also awarded una corona di alloro who would henceforth be known as poeti laureati. Even today here in Italy a university graduate is known as un laureato/a, giving rise to the verb laurearsi (to graduate).

Our botanical trek takes us along an easy trail which runs parallel to the rocky shoreline 150 metres below and terminate in a stunning craggy peninsula which gives us a roughly 300° view of the surrounding sea with just a narrow spur of land behind us. A perfect lookout spot, it would seem, and in fact Punta Manara is punctuated with the remains of a round stone tower know as la Torre Saracena (The Saracens Towers), i Sarceni being the notorious Moorish pirates who came to plunder and pillage these shores during the middle ages.

We head back down to Sestri, the picturesque Baia del Silenzio beckoning below as. Hopefully the bar will still be open, un altro caffè non sarebbe mica male!

“Ce l’abbiamo fatta” I tell the barman as I order un cappuccio deca for myself and un orzo for Serena
“Bravi, vi è piaciuto?” he asks
“Tantissimo!” we reply