Il Cinghiale in Italia (The Wild Boar in Italy) Posted by Serena on Nov 7, 2008 in Italian Language

It’s wild boar hunting season here, and that means that twice a week, on Wednesdays and Sundays, we have to be very careful where we go for our camminate (walks) as it’s not just the cinghiali (boars) that might get shot, those hunters use some pretty serious hardware to bring down their quarry. Luckily as we live next door to one of the hunters he can usually tell us where they will be doing their battuta (beat) so that we have less chance of being shot!

The contadini (farmer/peasants) have always seen the chinghiale as destructive, and in fact with their large tusks set on a powerful head, and weighing in at between 100 – 200 kg  (220 – 440 lbs) the wild boar can do a lot of damage to crops, vineyards, stone walls etc. as they root around for nutrition. But it has been the reduction of their habitat together with the virtual extinction of their natural predators that has pushed the cinghiali out into agricultural areas.

In fact within their natural habitat, i boschi (the woods), cinghiali have a beneficent effect. Their large tusks are used not just in self-defense but also to excavate for the roots, insects, and even small animals that make up their diet, and it’s pretty awe inspiring to see an area that has been ploughed up by these creatures, almost like someone has been at it with an industrial digger! This rooting around helps to bury seeds and destroy harmful insects thereby nurturing the woodland.

The cinghiale has a thick bristly hide with few blood vessels. This helps to protect it from injury and infection in the Macchia Mediterranea (the typical scrubby Mediterranean vegetation) and from the bite of animals such as the viper. The males in particular have a thick layer of protective fat, especially in the mating season when they frequently fight with their rivals, (men huh!). The female excavates a tana (den) and camouflages it with bushes and other vegetation, rearing her young in February and March. She usually gives birth (in Italian we say dare alla luce lit. give to the light) to between two and four cinghialini (little boars), but in a good year she can have up to eight, what a handful!

The usual social structure of the cinghiale consists of branchi (packs) of females: the mother and her new babies plus those born in the previous year. The young males leave these packs after two years and live a solitary life or join up with other small groups of males (sort of a men’s club) until the mating season.

Cinghiali are common throughout Italy, from the Valle d’Aosta in the north to Calabria in the south, and the islands of Sicilia and Sardegna. We often see their impronte (hoof prints) and excavations when we are out walking or searching for funghi in the woods but, as they are quite shy and well camouflaged, we very rarely see the animals themselves. We did have one however in our garden a couple of weeks ago, Gigetta is a young female cinghiale who has been adopted by Pietro, one of the local hunters. He told me that he found her abandoned and nearly dead down by the river, he took her home and one of his dogs suckled her, now she has become a pet. I gave her a stroke on her bristly back and she stretched out on the ground with her legs extended in front and behind just like a puppy! Did she know that her savior and benefactor was a dedicated cacciatore (hunter)? “She looks healthy” I remarked to Pietro. “Sì, lei mi sopravviverà” (“Yes, she’ll outlive me) he replied. 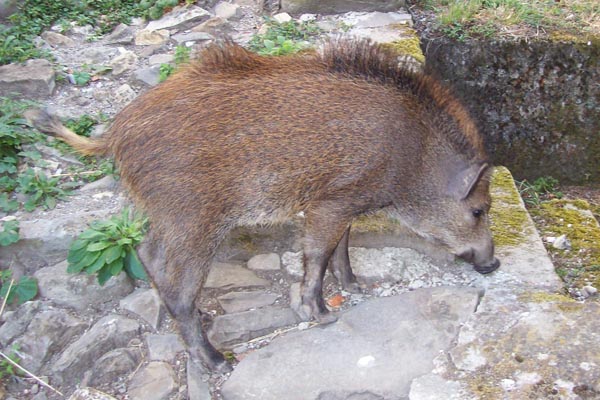