Il Colosseo – The Colosseum Posted by Bridgette on Oct 15, 2021 in Culture

I was reading la Repubblica recently and I saw this interesting headline:

“11 year old escapes from school, found in Rome by the carabinieri “I wanted to see the Colosseum.”

Apparently he asked the teacher to go to the bathroom, running away (fugire) to Rome 350 km away, all because he wanted to see the Colosseum and maybe also visit an uncle who lives in the capital.

I empathized with him, because I too would like to return to Rome to again see the ancient amphitheater. I figured you would also be interested in an escape to Rome, so let’s take a virtual trip. 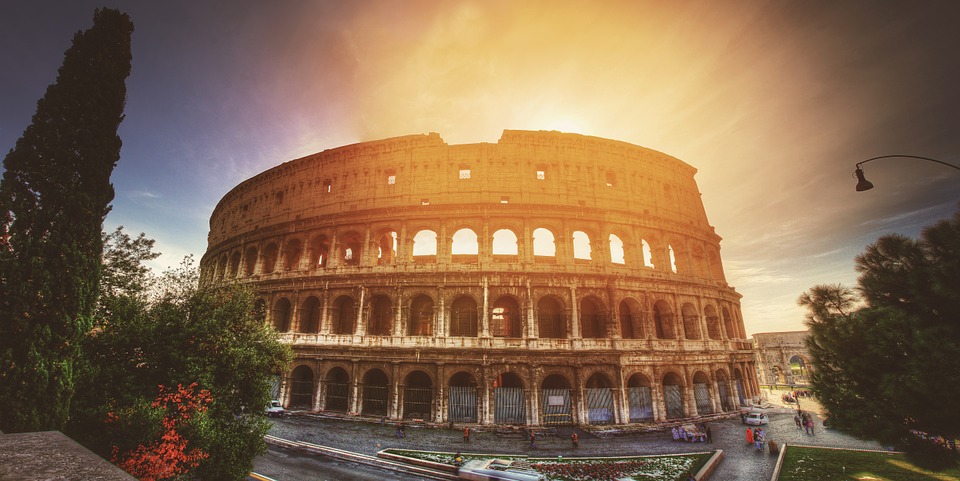 Thousands of years later, the Colosseum and other Roman ruins still reign over the city, attracting around 9 million visitors a year. The Colosseum remains the largest amphitheater ever to be built in history, from antiquity to today. It’s listed as one of the new 7 wonders of the world, and has had many purposes aside from that of tourism. It served primarily as an entertainment venue, with gladiator fights, plays, animal hunts, and mock naval battles which resulted in controlled flooding of the arena.

The Colosseum could hold around 50 – 80,000 spectators at a time, and was built also as a showing of Roman power. With the decline of the Roman empire, the Colosseum began to be repurposed with a church built into it, shops, housing, and even a cemetery. Eventually the stone was used as spolia – or repurposed building stone for new construction. That, coupled with numerous earthquakes and likely no money going in to restore it, led to state in which it lays today. Still it’s a marvel that it has lasted nearly 2000 years!

Did you know that the saying “All roads lead to Rome” derives from medieval Latin? It was first recorded in writing in 1175 by Alain de Lille, a French theologian and poet, who wrote ‘mille viae ducunt homines per saecula Romam‘ (a thousand roads lead men forever to Rome).

The proverb’s origins may relate to the Roman monument known as the Milliarium Aureum, or golden milestone, erected by Emperor Caesar Augustus near the Temple of Saturn in the central Forum. All distances in the Roman Empire were measured from this point and it was regarded as the site from which all major roads diverged. It may have even had the distances written on it of all the principal cities of the Roman Empire!

We are clearly still so captivated by the city of Rome, not much unlike thousands of years ago. For this reason I agree with Livius- Rome is blessed, invincible, eternal.

Avete mai visitato il Colosseo? Have you ever visited the Colosseum? Let me know what you thought about it below!