Iroso, The Last Mule Soldier Posted by Geoff on May 15, 2017 in Uncategorized

Possibly the most famous corps of the Italian Army are the Alpini, the elite mountain troops which were formed back in in 1872.

The Alpini, who are the oldest active mountain infantry in the world, are also well known for their indispensable companions, i muli (the mules), which were still in service up until the early 90’s. The Alpini’s original mission was to protect Italy’s northern mountainous border with France and Austria, and they really came into their own during WWI when they fought against Austro Hungarian troops high up in the frozen Alps. 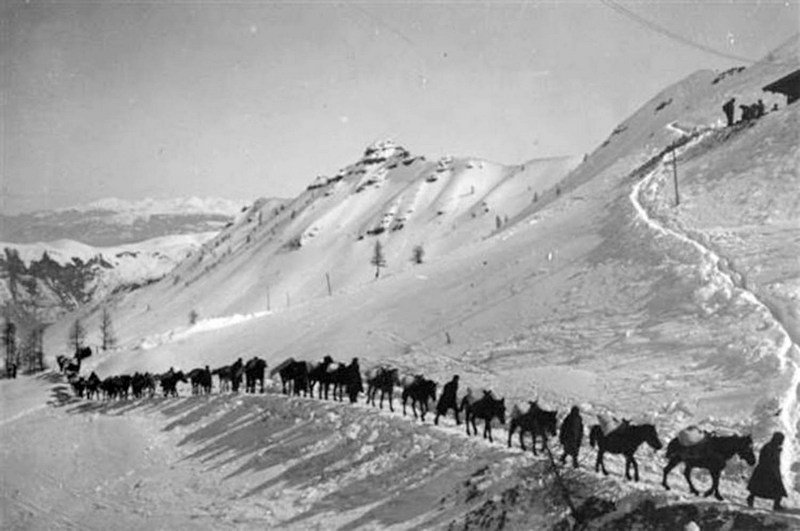 I ‘muli soldati’ (the ‘mules soldiers’) were used to transport weapons, food and equipment over terrain which didn’t permit the use of other forms of transport. It’s been calculated that there were around 250,000 of them in service at the beginning of WWI.

Whilst each soldier carried his own individual piastrina (dog tag), the mules had their numero di matricola (serial number) burnt into their front left hoof. And just as a fallen soldier’s dog tags were retrieved by his comrades, if a mule fell down a mountain crevice and died, its human companion was required to climb down and cut off the matriculated hoof in order to bring it back to the barracks as proof that the mule hadn’t been sold off to some local farmer!

In 1993 the last 24 Alpino mules were withdrawn from service and sent to auction. Ex Alpino Antonio De Luca remembers the day well:

“Andai all’asta del 7 settembre 1993 quando furono venduti gli ultimi 24 muli: mi servivano per il trasporto di legna nel bosco. Ma soprattutto io che ero stato un alpino non volevo che questi nostri compagni finissero in mano ai macellai. Mi vengono i brividi, quando penso ai camion delle macellerie posteggiati davanti alla caserma.”
“I went to the auction on the 7th of September 1993 when the last 24 mules were sold: I needed them to transport timber in the woods. But above all, I, who’d been an Alpino, didn’t want our companions to end up in the hands of the butchers. It gives me the shivers when I think of the butcher’s lorries parked in front of the barracks.”

The bidding began at around 500 to 600 thousand lire per mule. The butchers pushed the price up but De Luca, prompted by the words of another ex Alpino who’d gone the the auction, “Quello vuol fare mortadelle” (“That one wants to make sausages”), made a higher bid, and at 700,000 lire the butchers gave up.

De Luca saved 13 mules that day, spending a total of around 20,000,000 lire! More mules were saved by other individuals, including a lady from Cortina who wanted to gift a mule to Ana, l’Associazione degli alpini (The Alpini Association).

Mules, he continues, are generally considered to be testardo (stubborn):

But in reality mules are quite timid animals, they have a great fear of the dark, and can even be scared by a lizard. It’s these characteristics that leads to the mistaken idea that they are stubborn, and that’s why each mule was accompanied by his own personal Alpino who learnt to know him like a brother. 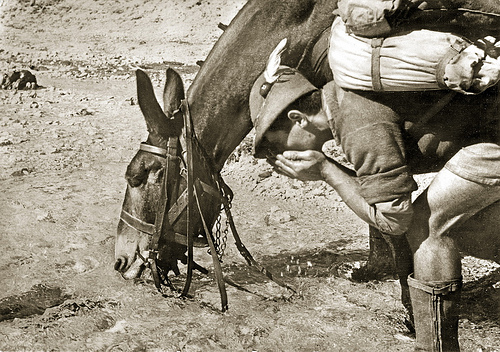 An illustration of the symbiotic relationship between an Alpino and his mule.

“Se gli passo vicino e tiro dritto, lui mi chiama. Ha lavorato qualche anno nel bosco, poi è diventato uno di famiglia.”
If I pass by him and carry straight on he calls me. He worked in the woods for a few years, then he became part of the family.”

Iroso is now 39 years old, which is equivalent to 114 human years:

“Ormai non vede nulla da un occhio e poco dall’altro ma si capisce che ha ancora voglia di vivere. E di mangiare le mele e le carote portate dai bambini.”
“Now he’s blind in one eye and can’t see much from the other, but you can feel that he still has the will to live. And to eat the apples and carrots brought to him by the children.”